They Might Be Giants Contemplate Amputation at Acoustic Brooklyn Instore

After a somewhat disappointing show two weeks ago at Rams Head Live, They Might Be Giants redeemed themselves as I'd predicted with a half-hour of "super-high-energy, super-high-voltage rock songs at an impossibly low volume" at Academy Records Annex in Brooklyn.

Facing the shop's back wall and funneled into three lanes around the record bins, fans anxiously thumbed through the LPs beside them to pass the time before the concert.  I only wished I'd picked better records to stand near, though I did find the soundtrack to Deep Throat hidden in COUNTRY T-Z.  The two bespectacled Johns emerged from the Employees Only door, and laid their eyes on the ranks of the crowd.  "These are the best sightlines on a rush hour subway," teased John Flansburgh.  "It's great to play at the place where I've spent one-third of my disposable income over the past ten years," he admitted before they launched into "How Can I Sing Like a Girl?" accompanied solely by Linnell's accordion.  It's always great to get a two-Johns performance, especially a song that hasn't been played in over a year. 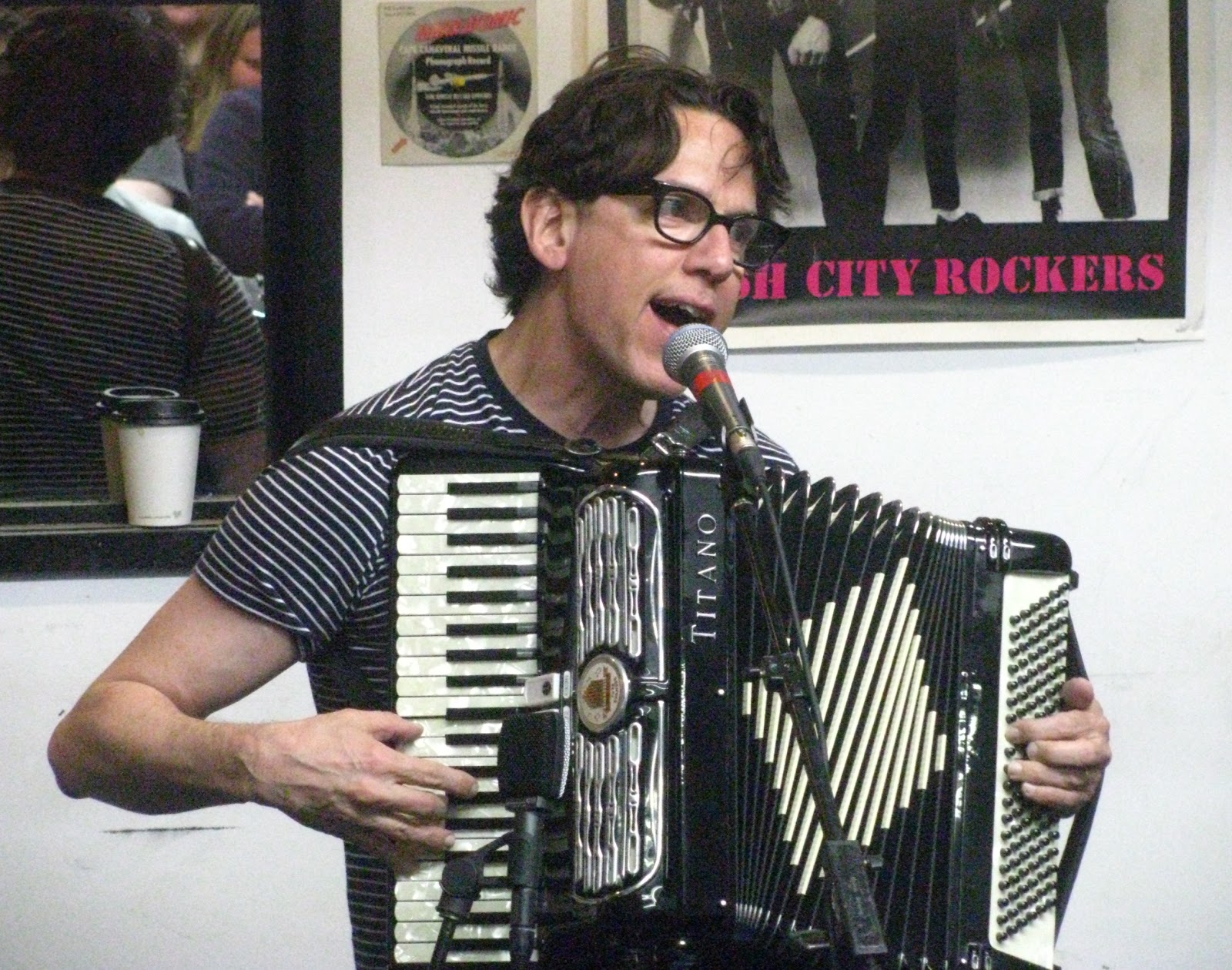 They brought out the band to perform "When Will You Die," and revealed prior to its start that they had never played the song on these instruments (John F. and Dan M. on acoustic guitar, John L. on accordion, Dan W. on bass, Marty on drums) before.  "If you've seen 127 Hours, it'll be like that scene where he jumps into the chasm.  We might have to cut our arms off later in the show," offered Linnell.  The smile on Flansburgh's face during the entire number was proof enough that they nailed it, but the applause from the audience didn't hurt either.  "How does my guitar sound?" he asked.  The crowd approved, and Flans responded, "It's like a fuckin' slice of heaven here on earth."

"Lost My Mind" led directly into "New York City," which featured the "King Kong" lyric and an amazing acoustic breakdown by the band.  "Doctor Worm" was great as always, especially with some high-pitched monotone double-vox during the bridge.  Aside from "Sing Like a Girl," they'd played all these songs at Rams Head, but these arrangements wiped the floor with those ones.  The air circulation in the store was limited, and the heat began to take its toll.  During the "Mesopotamish sun is beating down" line of "The Mesopotamians," as if on cue, Flans used a napkin to wipe the sweat from his brow.  At the song's end, he questioned, "Is it hot in here or is it just Dan Miller on the acoustic guitar, ladies and gentlemen?"  "Is it hot in here or is it just breathy?" Linnell added, getting a laugh.  After two spot-on Nanobots tunes, "Tesla" and the title track, Flans introduced the band, concluding with himself, "My name is Clarence Thomas!"  "Happy birthday, Clarence!" cried Linnell.

Anytime TMBG are doing an instore, go.  Some of the best performances I've seen them do, they've been surrounded by books.  I'm also happy to report that both Johns still have their arms, though they probably lost some feeling after signing so many autographs. 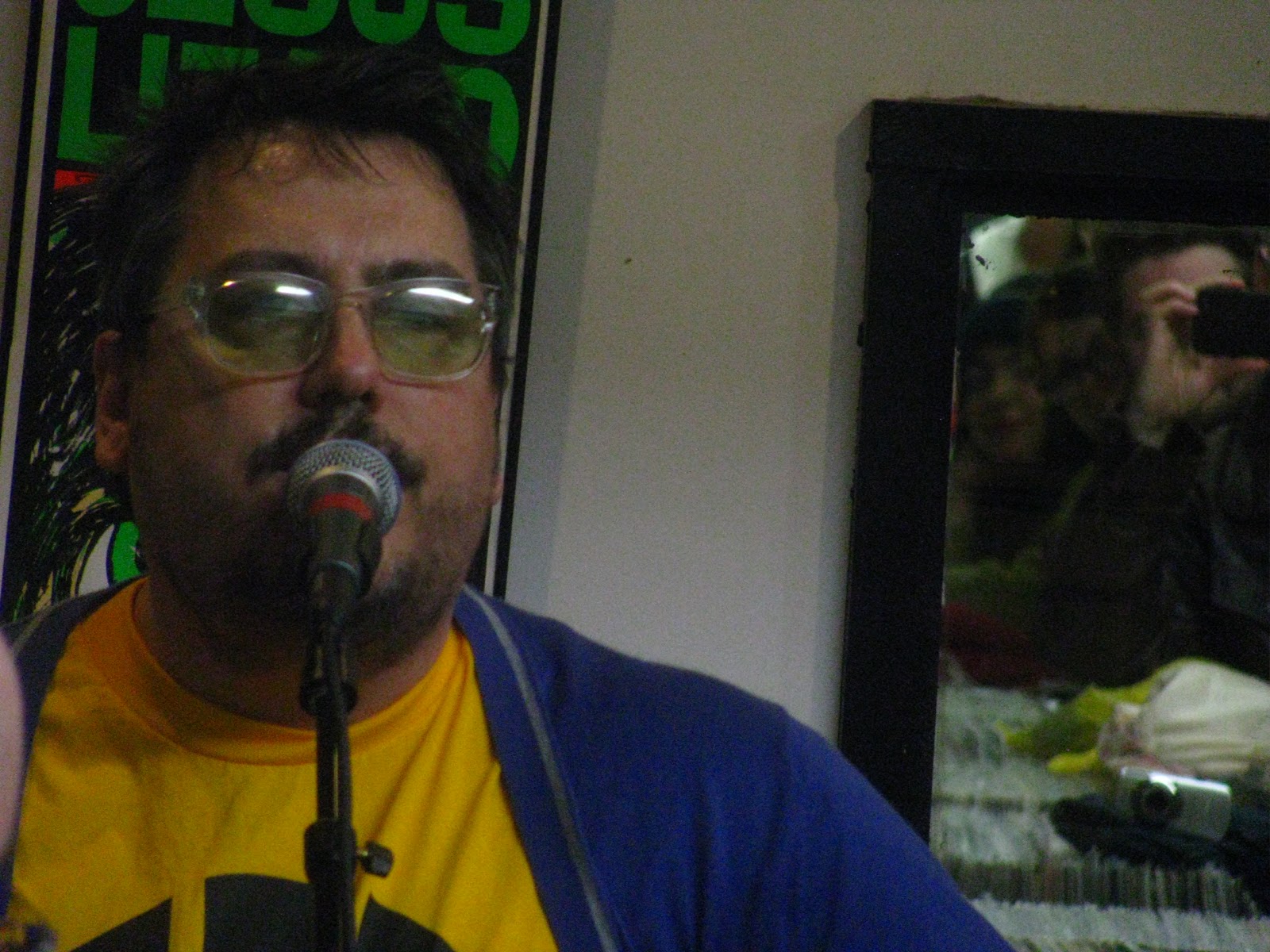