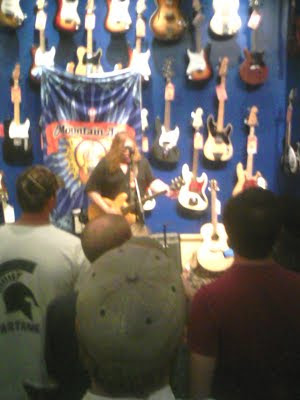 Warren Haynes played a short but sweet set at the Guitar Center on 14th St today. Billed as a "workshop" with performance, Q&A, and signing, I expected talk of guitar strings and finger-picking techniques. What I got was 29 minutes of solo Warren Haynes and an autographed CD. Definitely not complaining.
I arrived at Guitar Center before 5:30 for the 7pm show, and was informed I was the last person in line. Wow, perfect timing. It turns out I was the last person in line to wait inside, which was probably better than panting out in the humidity. The line behind me grew, much to the dismay of the Guitar Center employees, although it's probably their fault for not policing it better. (If you waited outside in line and did not get let in, you can blame a bunch of people who said they'd been waiting in line inside even though they hadn't. Still can't explain how so many jam band fans can be such dicks.)
About ten minutes before 7, we were let into the vintage guitar room to pick our spots. Unfortunately, a sweaty Stephen Root-looking motherfucker chose (and by chose I mean kept bumping into people until he fit into) a spot next to me. Warren came out looking happy as ever, and took his place in front of the wall of classic six-strings. After two minutes of banter with the crowd (mostly people yelling songs at him), he slid into "Patchwork Quilt," a familiar song that elicited cheers at the "Jones Beach" line from the New York crowd.
As people continued to yell out titles of songs on Music from Big Pink, Warren began playing the David Crosby tune "Almost Cut My Hair." It became clear that Warren was gonna do what Warren was gonna do. "Sick of My Shadow" followed, one of the grooving numbers off last year's Man in Motion. Warren's friend evidently requested "One" before the performance, and he got his wish. As Haynes belted out "Love is the temple," you could really appreciate the stellar acoustics of the room, so kudos to Farmer and the people of Guitar Center.
One more song remained, amid hopeful murmurs of how he should play for another two hours. (For being a Guitar Center gig, we were getting a little antsy for some solos.) "Soulshine" was getting the most votes obviously. "There's people who say 'Play Soulshine,' and there are those that are like, 'Oh, not Soulshine," Warren joked. He went with the latter, even though I heard no audible "Soulshine"-detractors, strapping on the bottleneck slide for a soulful cover of "It Hurts Me Too."
No encore, but it was super-hot in the room, and everyone still needed to have their CDs signed. As I shook his hand, I revealed to Warren that it was my first show, but definitely wouldn't be my last. He smiled and thanked me, like the gracious man he is.
You can pick up a copy of the 2 CD/1 DVD set Live at the Moody Theater here at Amazon.