Elizabeth & the Catapult Shares Her Keepsakes at Le Poisson Rouge

Last night at Le Poisson Rouge, Elizabeth & the Catapult (Elizabeth Ziman) performed an intimate album release show for her fourth LP, Keepsake. The collection of songs is aptly named. It's a sophisticated pop record that travels effortlessly through styles while still packing a melodic punch. I've already listened to it multiple times, and it hasn't even come out yet. 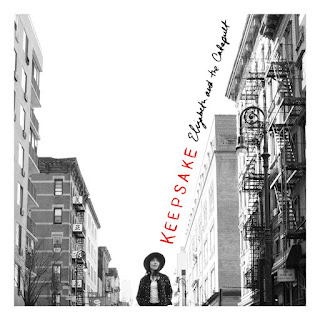 The subterranean space was arranged in a way I hadn't seen there before, with the stage in the center, surrounded by a flotilla of tables. My view of the stage was bisected by a column, but I was able to see Elizabeth take a seat at the piano in the right half. She began with LCD Soundsystem's sombre "New York, I Love You But You're Bringing Me Down" before brightening things up by segueing into her own "Mea Culpa." With an intrusive squeal, the noisy air conditioner above the stage kicked on right after the song's final lyric, "More bad mistakes for us to make before we fuck it all up," which was actually kind of endearing in that moment. Elizabeth thanked the audience and promised, "I'm just gonna give you everything I've got tonight until until I burst into a million pieces, and then I just have to lie down." A five-piece band materialized onstage to back her on the chorus of "Magic Chaser." After a pair of tunes from her previous LP, Ziman got on her feet and moved to keyboard to her right for a breakneck "Less Than You Think." Despite a technical issue with the keyboard that required Elizabeth to switch to the piano during "Method Acting," the song was one of the evening's best performances, culminating in a beautiful vocal harmony that included Secret Someones' Hannah Winkler. Ziman conceded the keyboard to Winkler and took a handheld mic to the center of the stage. The band proceeded with Keepsake's first single/track, "We Can Pretend," with its lush, Polynesian sounds evoking imagery of Technicolor musicals. They followed it with the album's peppy second single/track "Underwater" and then the band scattered, leaving Elizabeth alone. She performed a solo vocal rendition of Greg Laswell's "Embrace Me" and then shared acoustic guitar duties with Jonno Linden on "Let's Make a Mess of Our Love," a number new enough to not even be on the record.

"So the experiment continues," Ziman said, returning to the keyboard. "I had a children's choir sing on this song on my album, but I couldn't get them in here 'cause they're children." "We'll sing! We'll sing!" offered an eager crowdmember. "Will you be my children?" Elizabeth asked with a laugh. Looping her breath as percussion, she pressed on with "Ambrosia." While it may have been a lot to ask the audience to sing along on a song that they'd never heard before, its hopeful lyrics over a plucky, staccato refrain just beg for audience participation, and I have no doubt that over time this will become an Elizabeth & the Catapult concert staple.  At its denouement, Ziman held up a paper to read a list of thank yous, as well as a political speech in which she encouraged the crowd to "keep spreading love however you know how."

Elizabeth welcomed a mustachioed Jeff Taylor to the stage for his clapper "Kadoka," which was followed by a quick round of "Happy Birthday to You" for Wiman's mom and a "Better Days" bouncier than its studio version. "I just threw the setlist out the window," Ziman announced as she invited Emily Mure and Jeff Taylor to help close out the set with "Where Were You the Night," her reaction to last year's surprising election results. The elegy crescendoed into a chaotic jam, the vocalists' haunting wails intertwining to suggest a ghostly choir of past presidents spinning in their graves.