The Next Round - Episode 11: Gordon Voidwell

Two nights after I saw him perform at the Brooklyn Bazaar, I caught up with Gordon Voidwell in between DJ sets at Brooklyn Bowl.  Specializing in a postmodern brand of hip-hop and R&B he dubs "memory pop," Gordon released his third mixtape, Bad Études, in February.  In this two-part interview, Voidwell shares his thoughts on Prince, Afropunk, and the state of the music industry.  It even features a special visit from a newly converted fan.

Labels: gordon voidwell, the next round

I Am the Avalanche Marlin Room Setlist

It was an absolutely bone-chilling March night.  So cold that the doorman for Mercury Lounge was standing inside.  And he never stands inside.  "It's a different season onstage," announced Frances Cone, ready for summer in a short-sleeved blouse and Daisy Dukes.  Bathed in pink light, the Brooklyn band kicked things off with "Better Man," now sporting a fresh intro that didn't immediately bring to mind "Come on Eileen."  As they made their way through "Come Back" and new tune "Wiser," the band displayed a confidence that wasn't there when I'd first seen them perform.  (Granted, they had previously been booked between two neo-soul singers, and now they were headlining.)  Cone admitted her trepidation before the debut of "June," but it turned out to be the best of the set.  Based around a droning loop, the song built gradually into a soaring, shimmering slice of indie pop.  They literally hopped into "Soon," bringing a taste of country into the mix.  Part of the appeal of Cone is her unique voice, which sounds like the battle between a dulcet ingénue and a raspy femme fatale.  You're never quite sure who's gonna come out on top, and that makes it interesting, especially when she tackles a cover like the Black Keys' "These Days."  The brief, eight-song set came to its close with "Rattles Your Heart."  After a quick "band meeting" at the side of the stage, they returned for an encore of Paul Simon's "Rene & Georgette Magritte with Their Dog After the War."  And we all felt a little warmer inside as we stepped out into the freezing air.

ENCORE -
Rene & Georgette Magritte with Their Dog After the War
at 2:29 PM No comments:

The Next Round - Episode 10: Chris Mills

My favorite album of the year so far is Alexandria by Chris Mills & the Distant Stars.  How good is it?  Let's just say I missed the beginning of the Super Bowl because I wanted to let the B side of the record finish.  The musicians that comprise Mills' band travel all the way from Argentina and Norway to play with him, and his fans trek just as far.  His music has personally touched so many people that he has no choice but to keep writing songs.  I was able to catch up with Chris while he was back in Brooklyn between his "Polar Vortex Tour" and a string of dates in the UK.  Enjoy our merry, milkshake-fueled conversation.

Chris is at SXSW. Check out his tour dates here.

Labels: chris mills, the next round 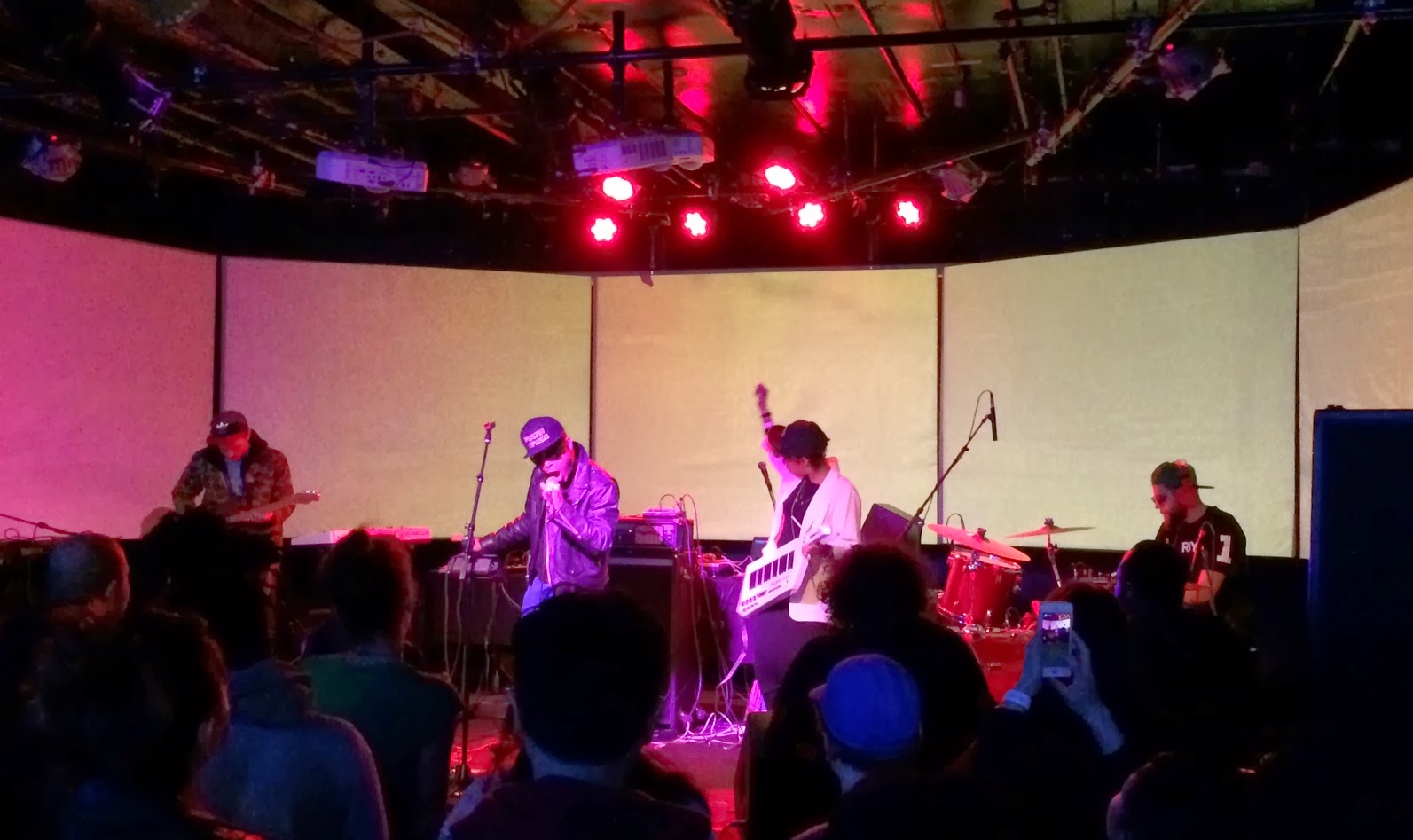 "We're gonna start this soon.  There's already a couple of attractive ladies in the front.  We've got at least one cool-lookin' dude," announced Gordon Voidwell.  Patrons meandered slowly away from the taco stand and arrowhead necklace displays towards the stage in the corner of the Brooklyn Night Bazaar.  "I'm just waiting to feel slightly more comfortable," he admitted.  Once the crowd had thickened to his liking, Gordon and his band drifted into the dreamy "Amnesia" from his one-month-young Bad Études mixtape.  It seemed like a strange introduction, but I understood completely when they barreled into the forceful funk of "Homemade VHS" and sent shockwaves through the crowd.  After the modern R&B flavor of "First Time," Gordon stripped down to a sleeveless Gucci shirt and bathing suit for the '80s pop of "Bad Way."  A ring of guys to the right started a dance-off during "1 Trap Mind," which concluded with Voidwell looping and layering his vocals into a fizzling drone.  They followed with the spaced-out interlude "Fixed," with Gordon joking, "We all just peaked on LSD."  Voidwell often gets compared to Prince, and songs like "GF Jeans" are why.  From the slinky bass of the verses to the refrain's pleading sensuality of "Daaamn, if I was your man," it could've been written by the Purple One himself.  But to Voidwell's credit, as anyone who saw that episode of The New Girl can attest, even Prince isn't exactly turning out Prince-calibre material right now.  Despite yells of "White Friends" from the back of the audience, Gordon ended the show there, leaving everyone wanting more (and "GF Jeans" stuck in my head for the rest of the night).  Fortunately, if you want to fill your Voidwell void, he'll be DJing at Brooklyn Bowl tomorrow night (RSVP here).

The Next Round - Episode 9: Chris Kasper

It's the first podcast of March!  Chris Kasper has been a staple of the Philadelphia music scene for years.  His thought-provoking lyrics are a favorite among artists like Amos Lee, Tristan Prettyman, and the Wood Brothers, who I saw him open for last week.  We cover it all in this chat, including some of the interesting rewards that fans could pledge for during his PledgeMusic campaign for his latest CD, Bagabones.


Check out tour dates on Chris' website, and buy the Foxhound album on Bandcamp.

Reviews of shows I mentioned:
Ben Harper at Carnegie Hall
Band of Horses at Manhattan Center
WHYY Festival in Philly

If you haven't caught up on the previous episodes yet, get there!  We've got many more on the way, so don't fall behind.  Please rate and review on iTunes.

Labels: chris kasper, the next round

"Yo," Mike Gordon said simply into his microphone.  It was only a few minutes after the announced set time of 7:30, and the sold-out crowd had yet to arrive at Webster Hall.  Phans used to showing up 90 minutes after doors for Phish shows may have been surprised to find the set already in motion, but the important thing to remember was this wasn't a Phish show.  This was Mike's event, hot on the heels of the release of his fourth solo record, Overstep.  He kicked things off with "Tiny Little World," a pop/rock number that exists at the crossroads of They Might Be Giants and Spin Doctors.  He got a little nasty towards its end, but pulled out before things got too funky.  "Yarmouth Road" came next, and was met with a hearty cheer of recognition from the growing crowd.  From its start, the reggae ditty was more fully realized than its early Phish interpretations, with percussionist Craig Myers clip-clopping on the blocks as Scott Murawski turned out some Al Anderson-style licks.  A few minutes in, however, the tune hit a lull.  Mike and Scott turned their backs to the crowd.  It was a fake-out.  The two spun around, revealing their glowing light-up guitars, and breathed new life into the song.  When it was actually nearing its end, Todd Isler began to drum an outro.  Mike looked at him and shook it off, preferring to segue into "Caught Up."  Following the brief number, Gordon made an odd comment about moray eels, and generously thanked ATO Records.  In "Radar Blip," he unveiled a new bass effect that sounded like screaming, which wore off its welcome pretty quickly.  He switched to a resonator guitar for "Loon," with Murawski taking the bottom on acoustic bass.  Too much talking made the song hard to hear, especially when Mike's mic wasn't super-loud to begin with.  He picked up the bass again for "Are You a Hypnotist??," putting a late '80s spin on the futuristic Flaming Lips song.  Gordon closed with "Another Door," one of his Phishiest-sounding solo tunes, so it only made sense that this was the one they'd open up.  The jam kept blooming into different upbeat sections, eventually reaching its apex, which had the whole band hopping in unison (aside from Isler, obviously).  The Phans showed their appreciation with a brief precipitation of glowsticks. 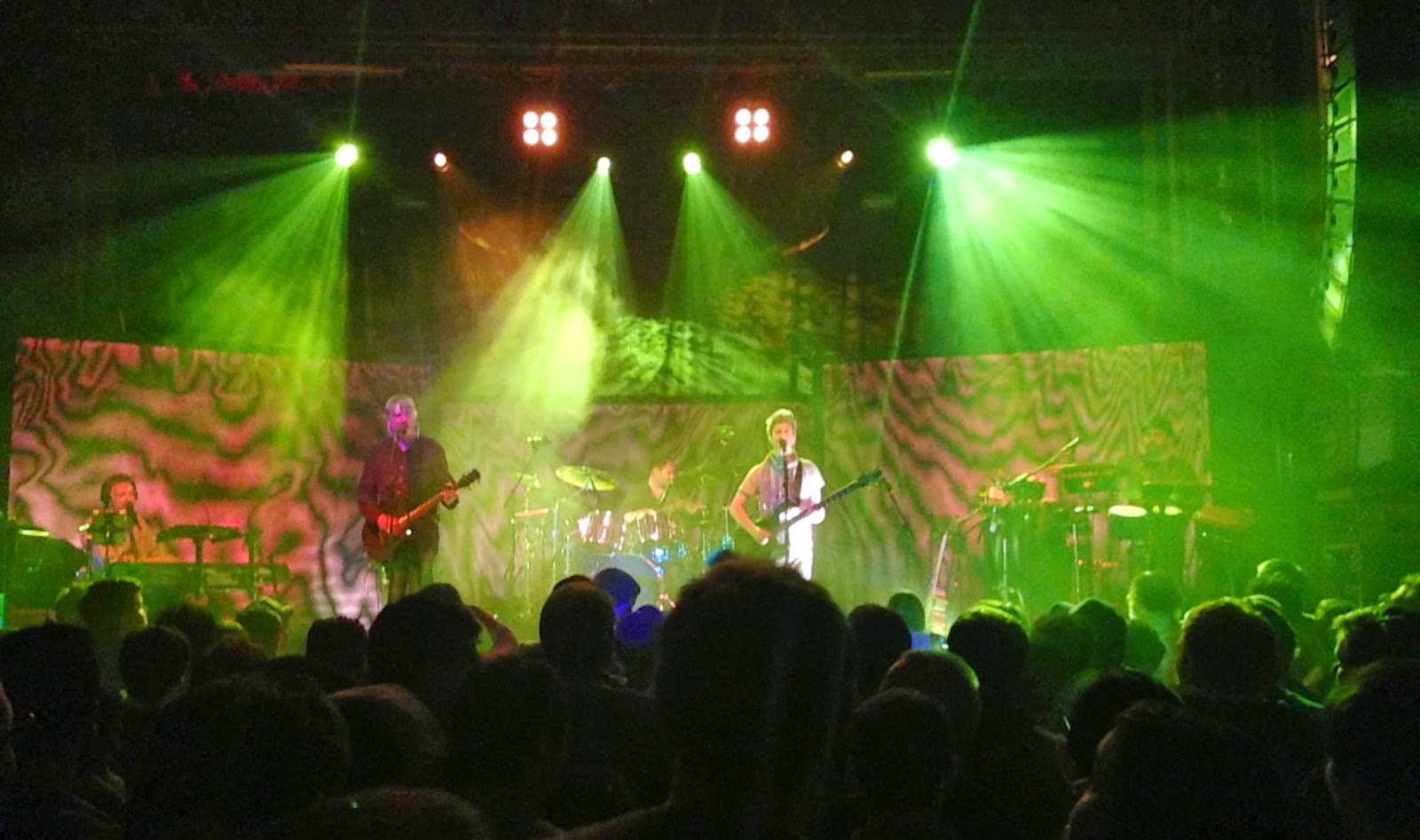 Gordon admitted that he was in "kid in a candy store mode" during the first set, as he tried out different instruments, pedals, and tunes.  The only issue with such an analogy is a kid in a candy store should have appeared to be having more fun.  But as just the third set of his 2014 tour, jitters and experimentation were to be expected.  He was more sure of himself in set two, and it showed.  Keyboardist Tom Cleary took lead vocals on "Pretty Boy Floyd," and tossed things back to Gordon for Phish rarity "Spock's Brain.  "Morphing Again" was a strange choice for a jam springboard, so its venture into improv felt more forced than organic, but it found its groove fairly quickly, with Mike revisiting the resonator for a bit.  It transformed quite nicely into the progressive calypso of "Mrs. Peel," which got a little dreamy towards its conclusion.  In Phish, Mike usually spearheads the most danceable moments, and the groove-hungry crowd were finally sated with the cheery "Face," with the projected video imagery evoking the Millennium Falcon going into hyperspace.  A darker, dirtier complement to the happy "Face," "555" followed, and really got the crowd moving.  "Long Black Line" was announced as the final song, and while it began with an earthy classic rock vibe, things got weirder and weirder as it progressed into alien territory.

It may have been the sense relief of completing his second show of the Overstep tour, but Gordon seemed the most comfortable during the encore.  He was almost a different person for "Voices," doing a silly sort of t'ai chi with Scott, and pointing in all directions at people in the crowd.  He may have been "uneasy in his skin" in the song's lyrics and for some of the show, but the encore served as his assertion that he's perfectly capable of having fun without his three Phriends.