I was considering going to Baltimore this weekend, and skipping the Ken Stringfellow show at Mercury Lounge.  I am proud to say I made the right decision, and saw the most extraordinary show I've seen so far this year.


My roommate and I got there early and grabbed a seat on the left bench.  The Meters were playing over the PA, inspiring me to look for a copy of Struttin' on eBay.  Just as "Cissy Strut" was hitting its groove, Chris Mills took the stage.  The sound tech faded the Meters out, but Chris kept scatting the lick.  "I'm just gonna beatbox the rest of the record for you," he said with a smile.  From the first note of "Wild Places," the crowd went completely silent, in awe of the man's voice.  He didn't hold back, almost shouting the words, but somehow he always stayed in tune.  The hint of twang that escaped at the end of breaths provided even more character.  Two songs in, he revealed his history with the venue: "The Mercury Lounge is where my wife and I shared our first kiss."  He had taken her down to the dressing room in the basement to impress her, but when he moved in for a smooch, she stated, "'I am not going to kiss you in the basement of the Mercury Lounge.'  But when we got to the top of the stairs, she said, 'What are you waiting for?'  So I kissed her... and now she's pregnant.  I always think it's weird that our relationship to sea level determined our first kiss."  The anecdote had the crowd chuckling like they were at a comedy club, and it was hardly the last laugh.  Breaking a string on "Blooms," the audience let out a collective "awww."  Ken Stringfellow emerged from the shadows to offer up his electric, but Mills refused.  "Think of this as an intermission.  Pretend it's Lawrence of Arabia, and Peter O'Toole has just been captured by the Turks." Still stringing, he told a story about how one of his students (He teaches at a middle school.) suggested a song for the upcoming recital: "Mr. Mills, we should learn 'Never Gonna Give You Up,' and then we can rickroll the entire school."  Once restrung, he played his newest song "Slumberland," which is so fresh, it won't even be on his late-summer release with the rest of the "future hits of America."  While most of the tunes were from this forthcoming LP, hid did play "Atom Smashers," a peppy rush of clever lyrics from 2008's Living in the Aftermath.  Though his guitarwork could've been a little more adventurous, that's really just nitpicking because rarely do you see an artist at this level of vocal control, songwriting, and stage presence.  Ken Stringfellow would have to do a lot to live up to his opener.

And holy shit, did he?  I picked up Ken's album Touched back in 2004 when I had a radio show in college, but until last night, I'd never seen him live.  He started out onstage with "You're the Gold," establishing a set of songs mainly culled from his recent LP, Danzig in the Moonlight.  But he didn't sing into the microphone.  He stood all the way at the stage's edge, perhaps even perched on the monitor, to serenade us.  Had I seen Stringfellow before, maybe I would've known about his tendency to enter the audience, but I hadn't, and magically found myself in the front row when he parted the crowd like Moses to play "110 or 220V." 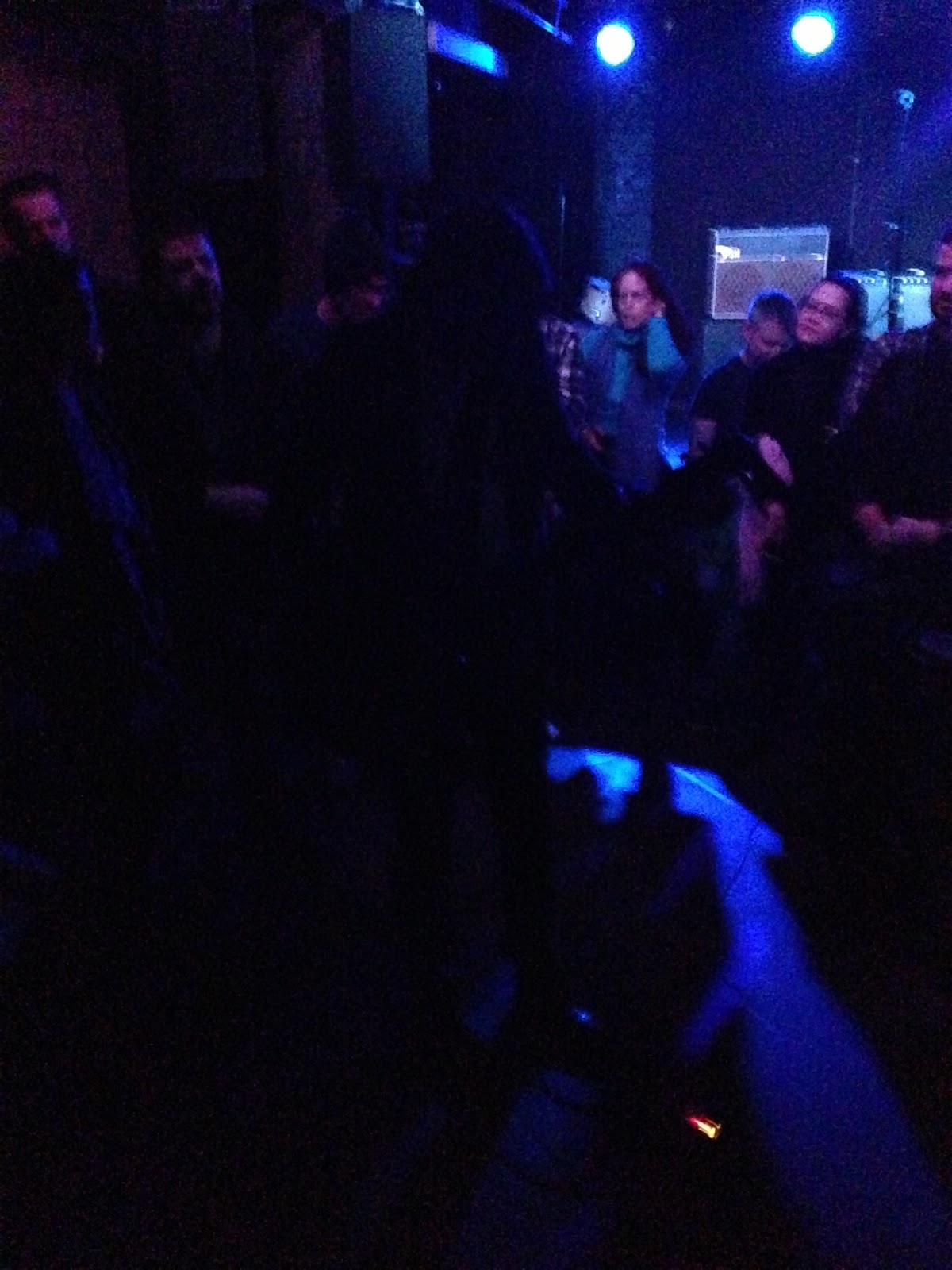 I'd previously commented on how intimate the Valentine's Day Alabama Shakes cruise was, standing ten feet away from Brittany Howard.  Now mere inches away from Stringfellow, I learned what intimacy was, as he played his guitar directly in front of me.  It was such a strange feeling, almost uncomfortable, yet welcoming at the same time, as the show transformed from a concert in a room of people to an incredibly personal experience.  "I'd like to do this for awhile," he informed the astounded crowd.  "It's a way to break New York into bite-size chunks."  After dipping back to "Find Yourself Alone" (and silencing the bartenders speaking to each other through that little drive-thru window in the wall), a fan requested a song by Stringfellow's short-lived band, Saltine.  "We played that at Brownies," said Stringfellow.  "I know.  I was there.  Brownies is no longer there," responded the hopeful fan.  "Yeah, neither is Saltine," Ken retorted, though he would later play "Any Sign at All."

Ken ventured back to the stage for the wonderfully sly "Shittalkers" on keyboard, but that didn't mean he was ready to use a mic.  That would have to wait until the next song, "History Buffs."  And before I knew it, he was back on the floor, making eye contact with me.  After a quick "O Tannenbaum" tease, he asked for the mic, turning audience members into roadies.  "I hope we don't blow up the PA.  If we each chip in 500 bucks, we can have that and a pony keg," he laughed.  For "Doesn't It Remind You of Something," a love song from the POV of two dead meth heads ("They're ghosts, but they're on meth, so they're super fast.  'Hey, who stole my bike?'  Fast ghost."), he was joined by a singer named Darling Cait.  Stringfellow typically has a different woman perform the duet with him every night (They even differ on the album, with Margaret Cho on the LP, and Charity Rose Theilen on CD.), but the interplay with Cait was so Nancy & Lee-perfect, it's a marvel that she's not on a recorded version.  Maybe Ken should release a compilation of all the duets at the end of the tour.  Climbing back on the stage for the final song before we had to clear out for the next concert, Ken said flatly, "I had a few requests, but I'm going to ignore those," preferring "Pray," another Danzig track.  Do whatever you want, Ken.  It's clear you already do, and it's magnificent.