"When I was asked to do this, I thought, 'Great! 'Cause I'm really bad at writing love songs.'  Thank goodness for heroes like these to make it easier to write love songs that mean something," said Ben Taylor last night at Symphony Space.  The heroes he was referring to are the children and teens with life-threatening illnesses or disabilities that receive professionally produced tunes with personalized lyrics from the Songs of Love Foundation.  The non-profit was started in 1996 by Queens-native John Beltzer after his development deal with a record company fell though.  While Beltzer may not have any hits on the radio, the smiles and letters from almost 24,000 children have made his career in music even more fulfilling.


As the lead songwriter for Songs of Love, opener Carl Allocco has contributed literally thousands of songs to the cause.  He performed a short set of four originals solo on acoustic guitar, including the cleverly written "God."  The room sounded good, save for the overuse of reverb on the vocal mic by the soundman. 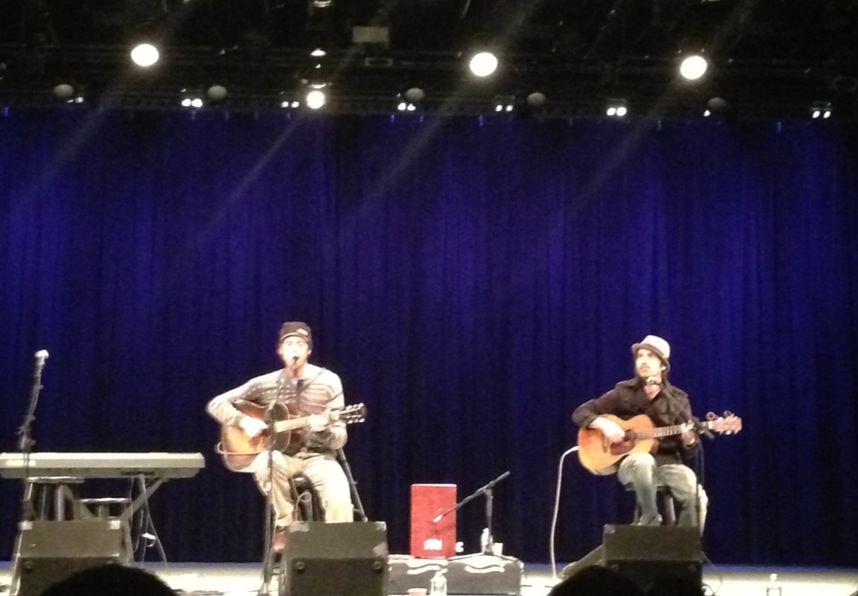 Ben Taylor took the stage alone to start things off with "Boyfriend," which casts him as a man who realizes he's in love not with the woman he thinks, but her boyfriend.  "Don't read too much into the song though. Two very straight guys up here," he said, welcoming his heterosexual life-mate David Saw to the stage.  After a quick joke while tuning Ben's guitar ("What kind of cheese do you use to tempt a bear out of your refrigerator?  Camembert."), the duo launched into the Paul McCartney ditty, "Dear Boy."  Next up was "Listening," a song the two wrote in order to become better listeners, but "turned into this little self-important, existential, philosophical number instead."  Benjamin Thomas, who seems to have officially moved from bass to cajon starting with December's Rockwood Music Hall performance, joined them for "How Serious Can This Be."

Ben then announced, "We're just gonna keep thickening this pile of talent here on this stage," introducing new additions to his band, Jonathan Quarmby on keys, and Beth Mendes on vocals.  Mendes seemed nervous, but it was only her second time ever onstage.  Her breathy, innocent voice recalled Marilyn Monroe or one of Serge Gainsbourg's heroines, and she added a new layer to the songs, especially a fleshed-out "Rocket to the Moon."  The tune was inspired by turning on the television, which has become, in Taylor's eyes, "some sort of strange non-talent celebrity factory" (He puts it more eloquently in the lyrics: "I always thought the stars should shine."), and I was delighted to hear it end with some interplay between Taylor and Quarmby instead of the abrupt stop it had two months ago.

Taylor is not just a singer; he's a storyteller.  And he loves to share the genesis of his songs.  The Spycraft setup preceding "How Serious Can This Be" and his troubles in midwifery that led to "Turn on the Lights" provide a foundation to the listener to enhance the experience.  I'd never before heard the revelation that "Not Alone" was about friends that drift or vanish from your life, and it struck a personal chord with me.  It must've affected others too because by its end, the crowd was clapping along and hooting from the back of the room.  Ben admitted that although breakups can provide a lot of material to a singer-songwriter, he doesn't want to have to deal with the actual breakups, so he makes them up.  Introducing new song "Time Slows Down," he confessed, "This is about this incredible woman that I imagined breaking up with."  Incredible, indeed.


Ben turned over lead vocal duties to Beth for the fresh cut "Do You Think of Me?" and took them back for "Good Bird."  Taylor closed his set with a poem by Timothy Mayer entitled What Do You Make of the Stars? that can be found on BT's first Daytrotter session (Join Daytrotter here.).

"I kind of get the idea that New Yorkers don't love audience participation," Ben had mentioned when attempting to wrangle the crowd together for "Dirty."  But we had no choice at the end of the show, when we were asked to belt out the refrain to the song that Ben composed for a girl named Greta.  Beltzer even plucked Grace Weber from the audience to assist in singing.  Though Greta had a bit of stage fright, you could see that she was happy to receive her Song of Love.