The last time I saw Jim James, he was playing to a sold-out Madison Square Garden crowd with his band, My Morning Jacket.  But that was 2011.  This is 2013.  Now touring behind his recently released debut solo LP, Regions of Light & Sound of God, James captivated a sold-out Music Hall of Williamsburg crowd with a straight-through album set and a few surprises for the encore.

The gig was opened by Dean Wareham, who you may know from Galaxie 500, Luna, or Dean & Britta, the indie pop duo he shares with his wife, Britta Phillips.  I'd heard of all these bands, but never listened before, so Wareham was uncharted territory for me.  Backed by a band that included Phillips, who looks fucking amazing for 49, Wareham doled out a short set heavy on Galaxie 500 tunes, including "Strange."  "That was an old song.  As you can tell because I mentioned Twinkies," Dean joked.  You'd suspect that being billed as a solo act, Wareham wouldn't be relying so much on the "Twinkie songs" of yesteryear (1989), but that wasn't the case.  Because he's been playing guitar so long, I also wanted more than the simple, slowed-down jangle pop instrumentation, with a solo at the end of "When Will You Come Home" serving as the lone moment of prowess.  He brought things to a close with a cover of New Order's "Ceremony."

After a lengthy set change that included the mounting of James' Gibson Flying V on a stand that made it appear as a literal Flying V, the lights finally dimmed for the show.  James began with album opener "State of the Art," an excellent choice, considering the slow build as each instrument was added one by one.  James sauntered around the stage in his suit, fist-bumped a crowdmember, and led fans on the chorus of vowels.  On the right-stage stairs sat ?uestlove, who dubbed James' "A New Life" the "most beautiful song he ever played on Late Night."  Once the song had gained full momentum, James came to the line "The power's goin' out," and the room abruptly went black.  The lights popped on again as the music returned, and the grinning audience immediately adapted to cheering "Woo!" on the return beat.  Those who listened to Regions of Light and were let down by the lack of guitar solos didn't have to worry about the Flying V going to waste, with James shredding a killer one here, and on two later tunes.  The album's single, "Know Til Now" shuffled out next, coming to its end with a mimed sax solo (I didn't see a mic.) from James.

The album unfolded in sequence, and you could tell by the look on his face that James was just happy to be up there singing these songs.  The record's instrumental filler track "Exploding" took on a little more weight as a live number, and "Of the Mother Again" actually got the crowd dancing.  Set-ender "God's Love to Deliver" was the obvious highlight, however.  The song wound down to what would be the record's last grooves, but this wasn't the record, and it evolved into a bass-led jam that conjured some of the same dark magic found in Phish's 12.30.12 "Carini."  Five minutes later, James topped it all off with a real sax solo (He played into a center-stage mic.).  The solos and jams effectively doubled the album's runtime, and James and company retreated backstage. 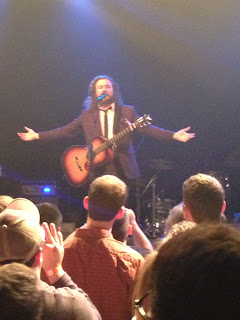 Having not spoken at all during the set, when he returned to the stage, he thanked us genuinely, "This is our fourth show ever.  It's been a real pleasure.  You've been beautiful."  James then played his first actual solo number of the night, an acoustic "Wonderful," which culminated in some sighs that sounded like a Muppet version of Elvis.  Realizing how silly it sounded, James remarked, "Do that when you go home and get in the shower tonight.  Just let it all out.  Let the day out."  The band joined him for some more My Morning Jacket tunes, "Wordless Chorus" and "It Beats 4 U," with James touching fans in the front fingertip-to-fingertip like E.T.  "Touch Me I'm Gong to Scream pt. 2" had fans screaming when MMJ bassist Two-Tone Tommy appeared to play electric guitar.  The song segued nicely into a joyous "Victory Dance" to finish out the memorable evening.

(Help is appreciated with Dean Wareham setlist.  Thanks.)