Beat Radio's new album Hard Times, Go! drops on the 19th (though you can buy it now on Bandcamp), and last night at Pete's Candy Store, fans were treated to batch of the new tunes, some old favorites, and a cover of Robyn's "With Every Heartbeat."  When I arrived at Pete's, the bar was bustling.  I squeezed my way into the train car-styled back room, and found myself in the midst of a poetry reading.  The final poet was reading from his book of verses from the point of view of a schizophrenic man, but I found it vapid, considering the author didn't know his character well enough to know where he was or what he was doing. 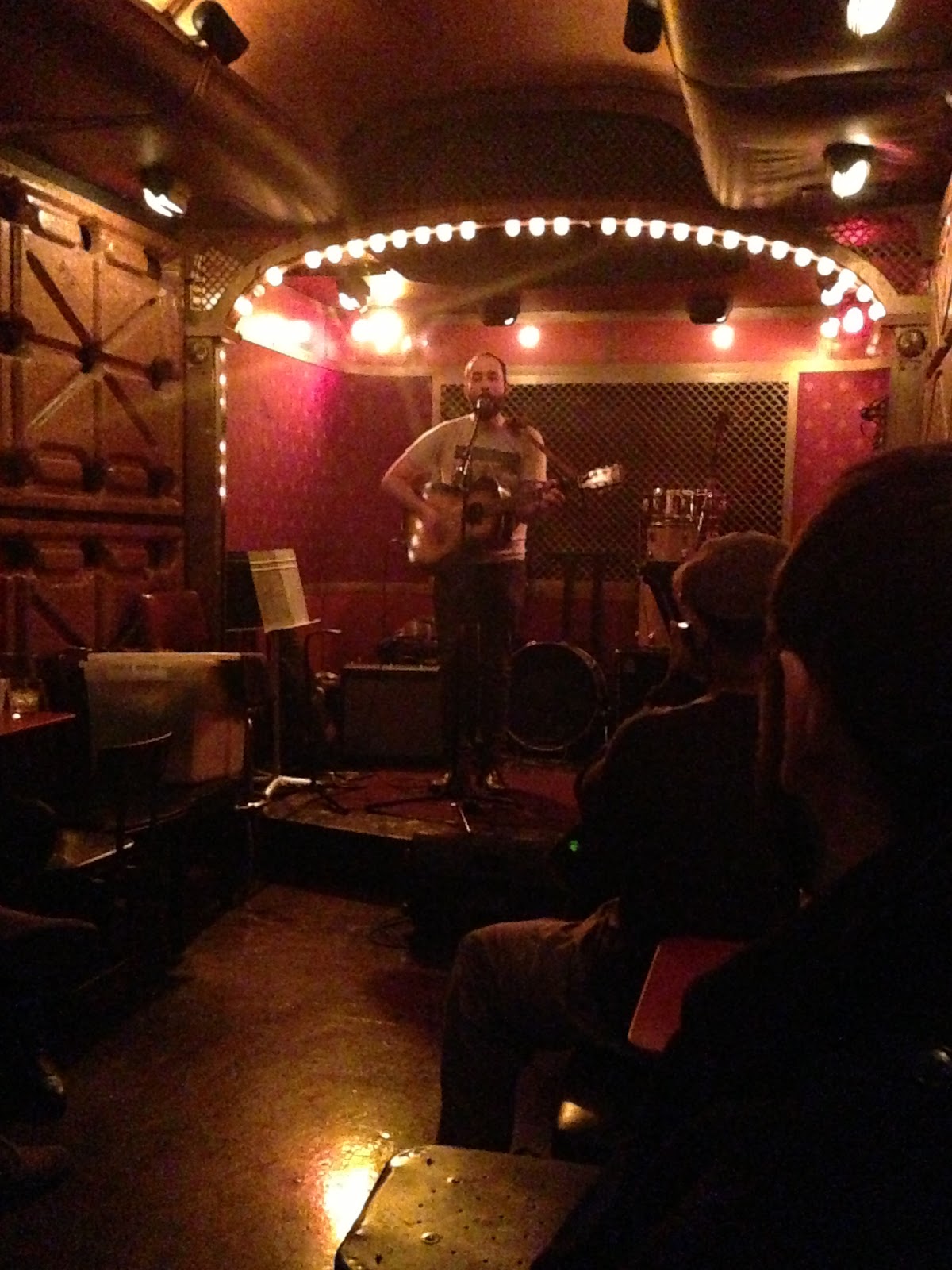 The poets cleared out after hawking their books, but they should've stuck around.  After soundchecking with a bit of "Golden Age," Brian Sendrowitz a.k.a. Beat Radio took the stage with his guitar.  Beginning with "Days Like Diamonds" from the new album, he moved onto a cover of Robyn's "With Every Heartbeat."  Sendrowitz has admitted that the new album was directly inspired by the Swedish pop singer's Body Talk, so this was more of a loving tribute than a hipster joke.  He then revealed "Chasing a Phantom" was written after watching an episode of Mad Men.

"So my drummer Brian's gonna have a baby.  Well, his wife's gonna have a baby momentarily, so he's not here," Sendrowitz said before inviting Pete Oberg to join him on synth for the single, "Hurricanes, XO."  "This one's kinda sad and depressing," Brian offered, teasing Hank Williams' "There's a Tear in My Beer" preceding one of my favorites, "Stars Collided in Our Heart."  To introduce "Dreaming Wide Awake," he began telling the story of its germination in helping to move his sister-in-law upstate, but was interrupted from a yell in the back.  "Incest!" the guy shouted.  Confused, Sendrowitz asked, "What?"  "You guys need a drummer?" the intruder proposed.  Brian shrugged it off, continuing, "I'm dedicating it to my sister-in-law because it would be a nice thing to do, until things got weird."  Laughs from the crowd.  "Awkward for life. That's our motto," he said, starting into a more subdued version of the song than on the album.  Sendrowitz has been busy recording an acoustic companion to the album for its Kickstarter sponsors, which has been somewhat of a surreal experience for him.  "It's like in 2004, if I'd decided to go in the alternate direction. It feels like I'm living that now," he remarked.  Expecting another HTG track, I was pleasantly surprised to hear heartfelt oldie "Teenage Anthem for the Drunken Boat."  The song references both "Don't Stop Believin'" and "More Than a Feeling" in its lyrics, and with a smile, Brian repeated the "More than a feeling" line in the style of Boston.

There is a definite poetry in Beat Radio's words.  I first saw them perform at the Bell House in 2009 when they opened for the Mugs.  I had slept only an hour the previous night, and was nodding in and out of sleep throughout the performance, but some of those words found their way into my sleepyhead.  I gained even more respect for Sendrowitz after the show, when he stopped chatting with the pretty girls surrounding him in order to get a CD for me.  (I realize now that he was probably married at the time, so it wasn't that big of a deal.)  That concert was my last in New York before I moved to California that year.  It was actually in California, on the lawn of the Brand Library in Glendale, where I really connected to Beat Radio, listening to The Great Big Sea on my iPod, the theme of a romanticized past striking a chord.  Though I don't listen to the album often, I pull it out during the emotional times when I need it.

Hard Times, Go! is a darker album than the previous Beat Radio records.  In earlier efforts, the blips, bloops, and loops of the instrumentation helped to uplift Brian's musings on failed relationships and nostalgia to a point where they never seemed permanent.  He'd learn to love again and lose again, a vicious cycle, but a cycle with some optimism.  Despite the Robyn influence, the new LP is decidedly less electronic, and the lyrics are decidedly more adult, infused with the complications brought on by both the dissolution of the band and money problems.   Sendrowitz, unlike the ambitious, yet spurious poet, knows where his POV is coming from.

So what prevents the album from being a complete dirge?  The hope in Brian's vocals.  Sendrowitz is not technically a great singer, but he's an honest singer.  When his voice wavers, you excuse him because of the excellent songwriting, sort of like Bob Dylan.  Maybe that's not an accurate analogy because Dylan is obviously a better lyricist, and Brian is a better singer.  Jeff Mangum might be a better comparison.  Be that as it may, I think he should have started the show with Pete on keys.  The guitar and synth harmonized to complement Brian's vocals nicely, so if he had put that portion upfront, he could've then stripped it down to be even more honest and intimate.  It might've even kept around some poets who could've initially been turned off by another warbling guy with an acoustic guitar.

SET -
Days Like Diamonds / With Every Heartbeat / Chasing a Phantom / Hurricanes, XO / Golden Age / There's a Tear in My Beer (tease) > Stars Collided in Our Hearts / Dreaming Wide Awake / Teenage Anthem for the Drunken Boat
at 11:39 PM