Saturday night at Radio City Music Hall, pop-rockers, Fun, played their favorite show of the past year, and possibly their career.  The audience was just as taken, one fan even referring to the evening as "more than magical."  Fun were supported by Andrew McMahon, who played tunes from his previous bands, Something Corporate and Jack's Mannequin, as well as "Learn to Dance" from a solo EP to be released this spring.

"New York City, this is a sight for sore eyes," announced Andrew McMahon as he took the stage promptly at 8:00.  Backed by a five-person band, he cruised into "Bruised" off of Everything in Transit.  One of my friends listened to a lot of Something Corporate in high school, and I like "The Lights & Buzz" by Jack's Mannequin, but I've never been into McMahon.  His voice has always annoyed me, and his chord progressions usually reminded me of Christian rock.  Having said that, he wasn't horrible.  His enthusiasm was really his selling point, especially on "Keep Rising," where he could barely stay seated at his keyboard.  The song was left off of the second Jack's album, hindsight allowing him to realize, "Holy shit! Why didn't I put that on the record?"  The song found new life as a bonus track on the Best Buy version of People & Things, but McMahon encouraged the crowd to illegally download the song "'cause you're just stealing from a record company I don't work for anymore." 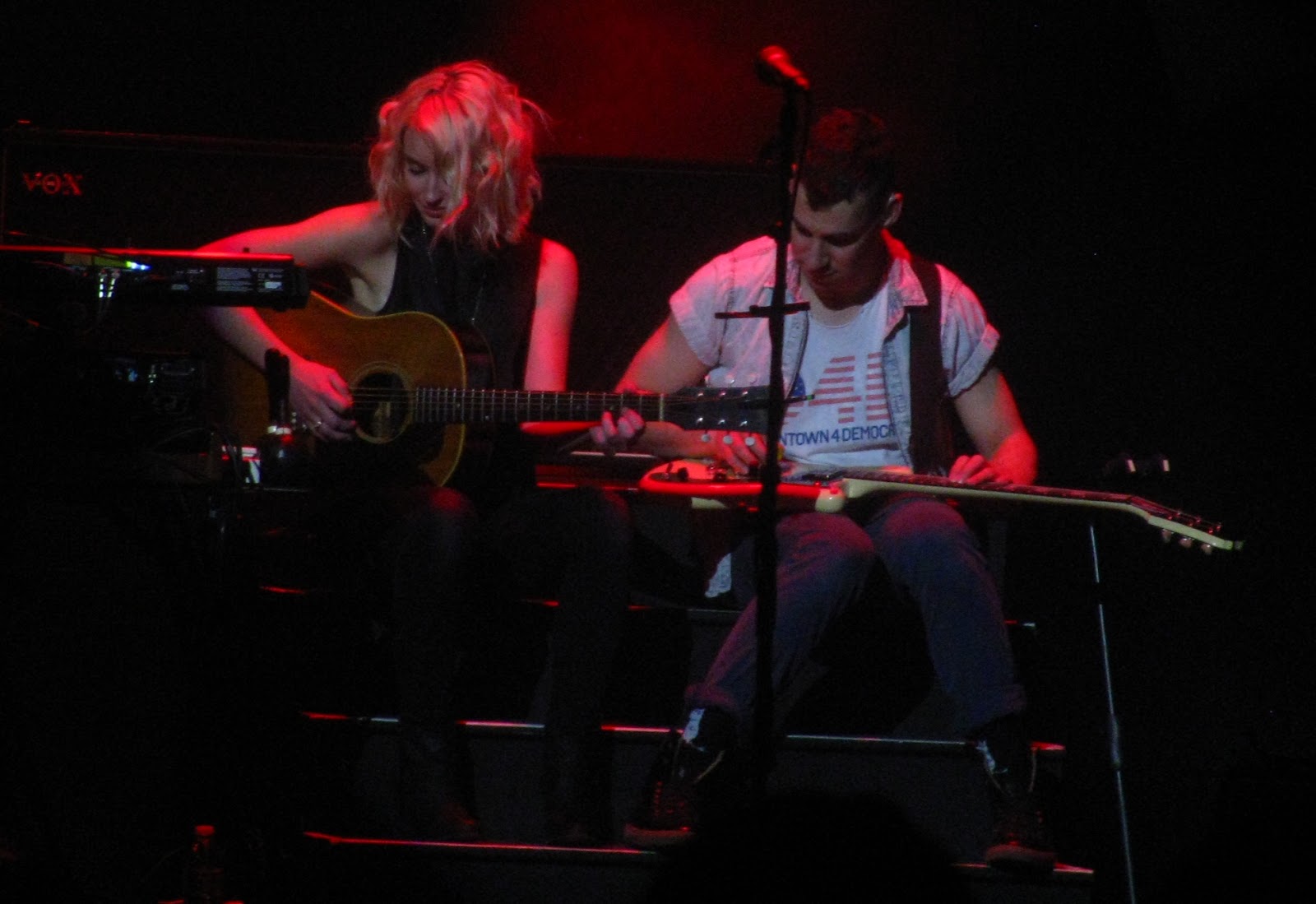 I saw Fun three times last year: once in a fire code violation, once in a small Brooklyn club, and once on an aircraft carrier.  But this was Radio City Music Hall, home of the Christmas Spectacular.  And sold-out.  They'd have to do more than just douse us in confetti.  They'd have to pull out all the stops.  As soon as the lights went down, we knew they were aiming big.  Sheer screens dropped from the proscenium, and "FUN." was projected in lights across it.  As the intro music soared, the font increased in size, creating a 3-D effect.  The curtain screens shot upwards as the band launched into "Out on the Town," the bonus track (Can it really be called a bonus track if it's on every version of the album?) from Some Nights.  The charging "One Foot" followed, complete with trumpet blasts from Andrew Dost and saxophone squeals from Emily Moore, sporting a platinum blond coiffure (Perhaps to celebrate the day's news of Some Nights going Platinum?).  During "All the Pretty Girls," the mirrored backdrop lit up as a cityscape with song titles masquerading as neon signs.  A subway train emblazoned "Out on the Town" rolled along on the screen in front of the drum riser, and "Barlights" floated by on a blimp across the five monitors that framed the stage. 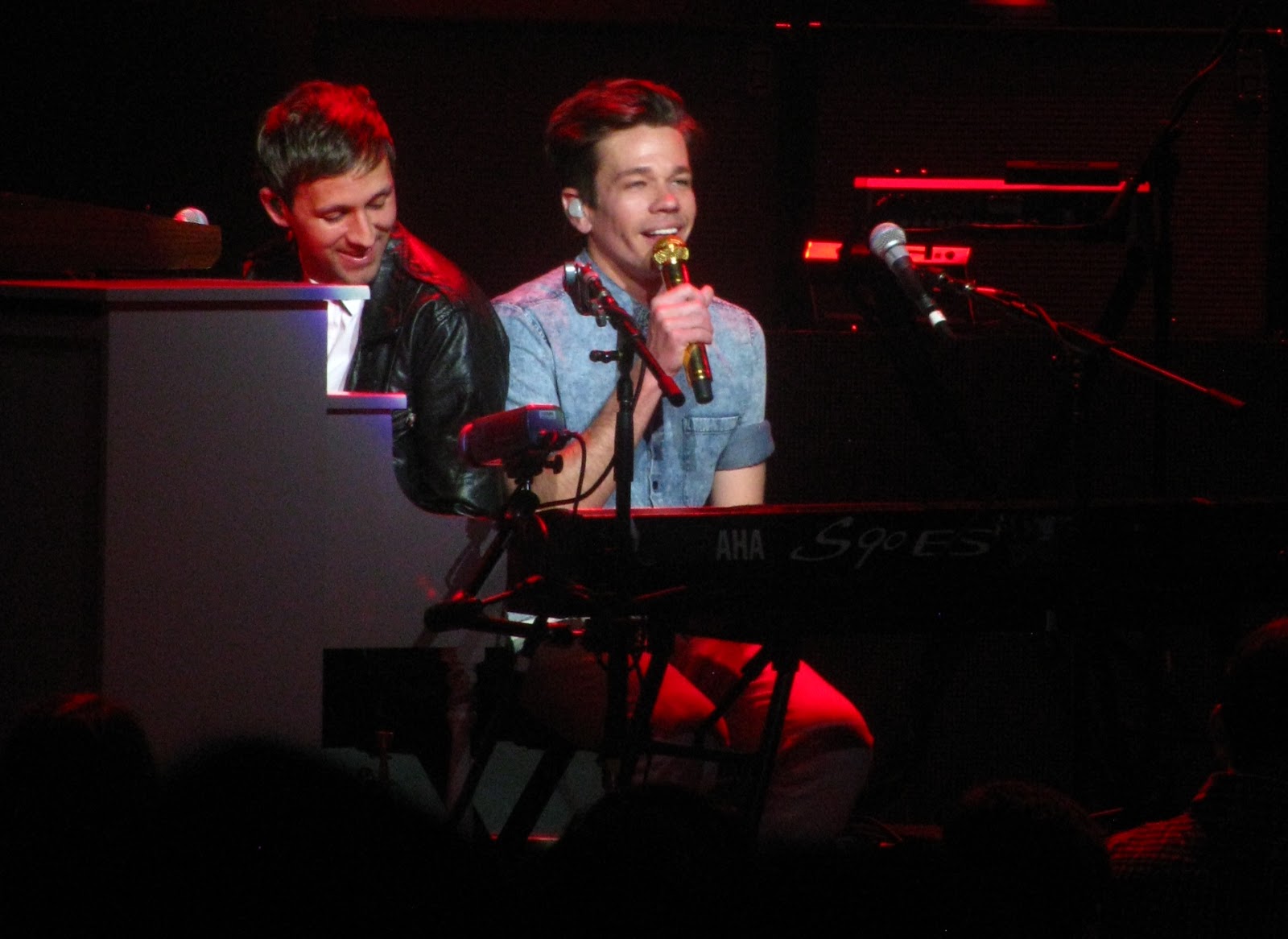 "How the fuck did we get here?" laughed Nate Ruess following "Why Am I the One."  "Holy shit.  I'm gonna have the best fucking show of my life; that's for sure.  Why don't you guys do the same, alright?"  A live feed of crowd shots appeared on the backdrop for "At Least I'm Not as Sad," which gave off a sort of cheesy "kiss cam" Jumbotron vibe, but when Nate sweetly shared a seat at the keys with Dost for the song's conclusion, we'd all but forgotten about it.  "All Alone" wasn't as good as usual, but they segued into a fantastic "It Gets Better," heaped with vocal and instrumental flourishes.  When he came to the line "Not quite enough cigarettes to calm me down," Nate triumphantly substituted, "I don't smoke cigarettes anymore!"

When I saw Steel Train's last show, I mentioned that I hoped Jack Antonoff would not forget what a gifted guitarist he is.  If his vicious intro to "Barlights" was any indication, he hasn't forgotten.  Nate interrupted the song briefly to reveal that he wrote it during his move from Arizona to NYC, and again to say, "I think we can make this the loudest Radio City's ever been," before leading the audience through the "I feel alive" section of the tune.  The song also featured an extended drum solo from Antonoff and Will Noon. 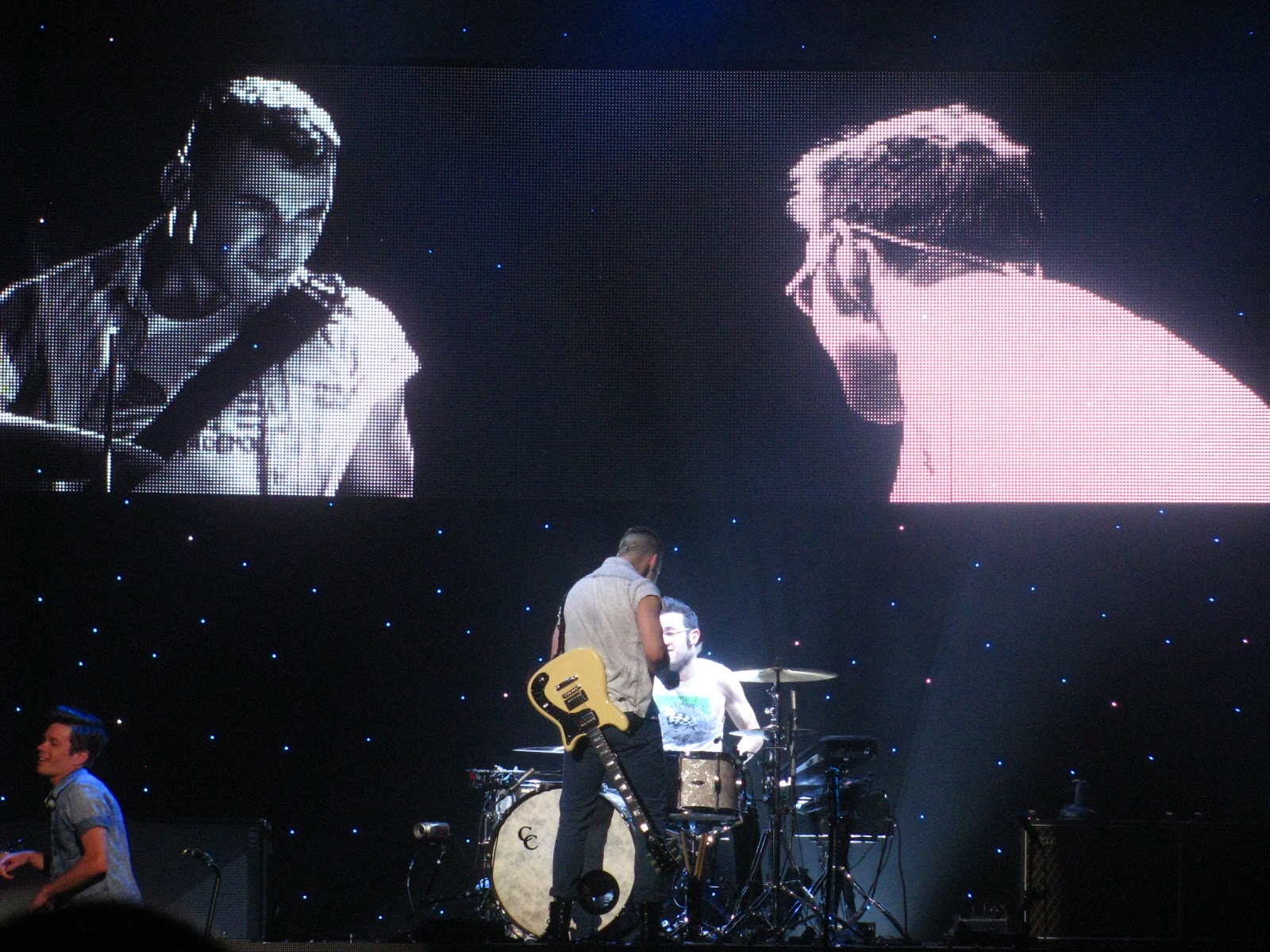 After the lyrics to "All Alright" were projected karaoke-style in a myriad of ways, the three songwriting members were left on the stage.  Jack commented on how far they've come in the last decade: "Ten years ago, Andrew was into dumpster-diving, Nate was into carbs, and I was into pot."  Nate added that while he still has a hard time growing facial hair, he has no problem sprouting it on his lower back.  He explained his current shaving regimen as randomly hitting his face with a razor to achieve some sort of 5 o'clock shadow, to which Antonoff chimed in, "You guys can't see up close. It's like Mickey Rourke meets a young boy. And I mean that in the best way possible.  In the sexiest way."  The trio performed "The Gambler" in tribute to their families and friends who have supported them over the years.

Arguably the biggest surprise of the night came after "Carry On," when the band performed a "new old song" called "What the Fuck."  Although Fun played it a handful of times in 2010, the multi-part song has been mostly a rarity.  They closed the set with an obvious choice, "We Are Young," but the video of slow-motion fire consuming the stage was pretty astonishing. 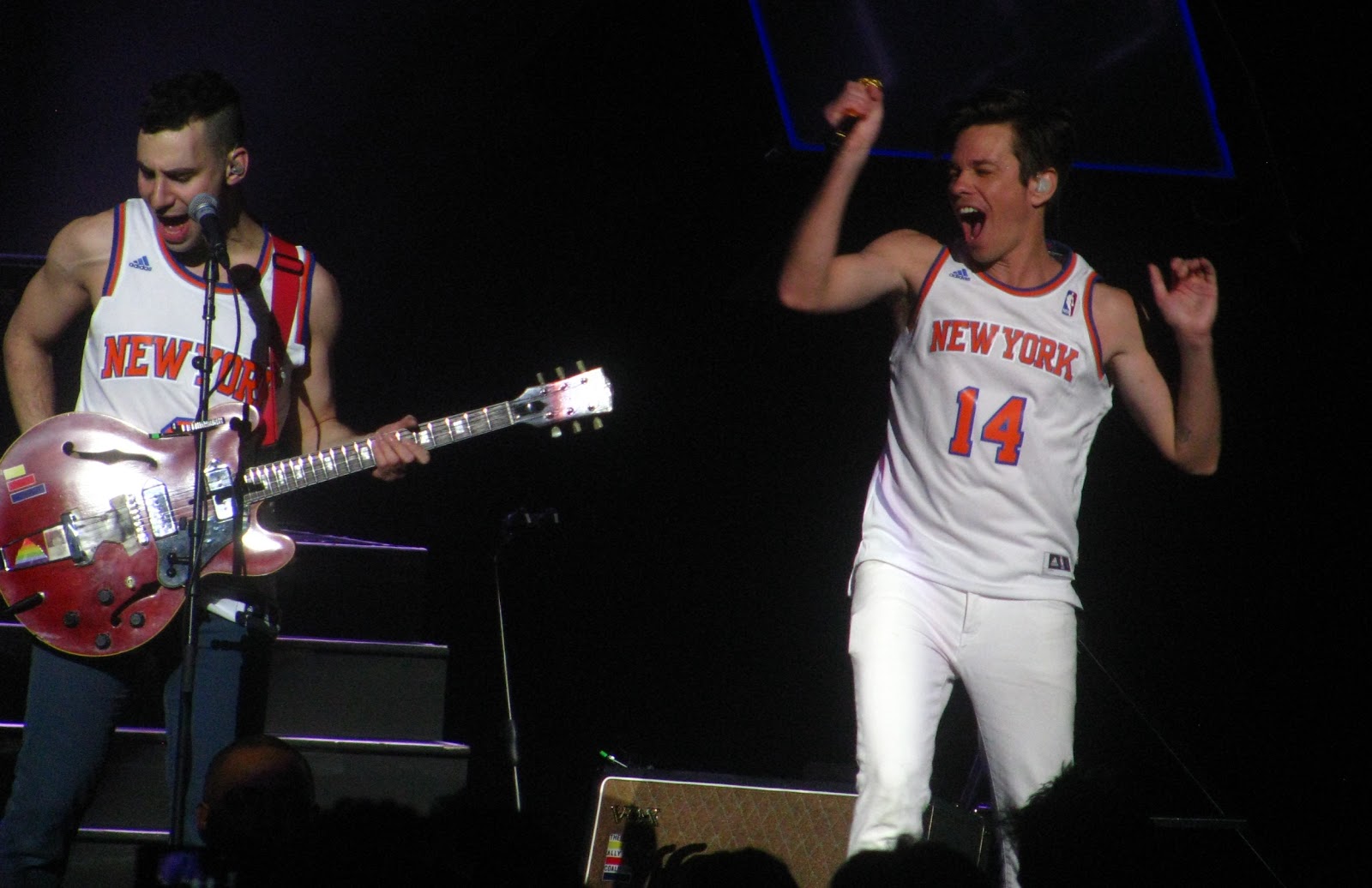 The band returned three minutes later, this time with Jack, Andrew, and Nate in customized New York jerseys (For those interested, Jack was #2, Andrew was #7, and Nate was their product, #14.).  "Some Nights" was awesome.  Jack's guitar was scintillating, but the real treat was watching Nate, who had already covered every inch of the stage during the show, running all the way up the tiers on the side of the theatre to sing to the fans in the balcony.  "Stars" drifted in seamlessly from the remnants of "Some Nights," with Nate adding the "Don't you wish we could play in the snow" section, appropriate to the weather outside. 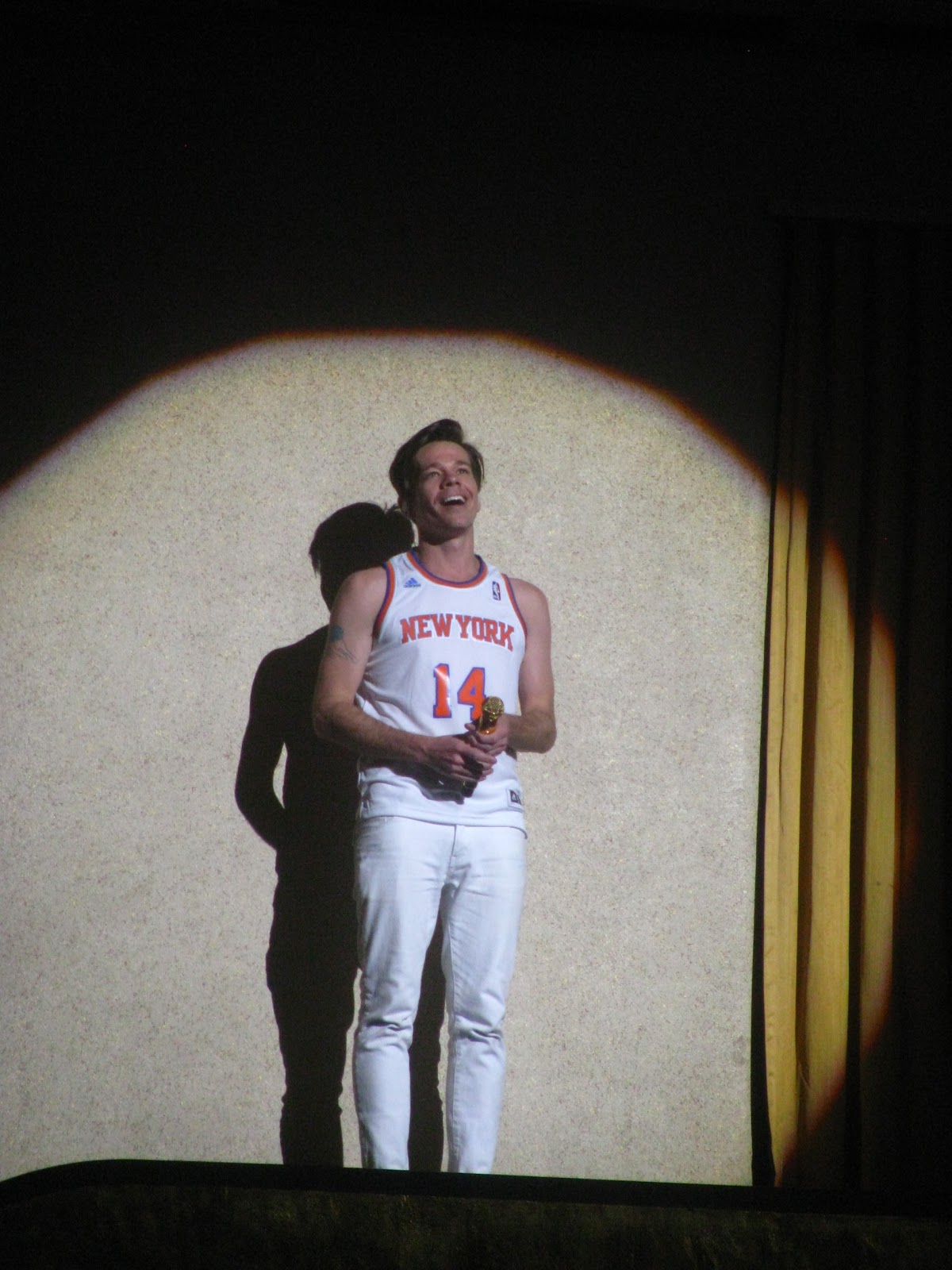 The twinkling gold lights remained at the song's end, and we clapped for the band to return once more.  They reemerged after a two-minute break, with Nate conceding, "I guess we've got no choice but to do another song."  A huge smile on his face, he gushed, "This is the best hometown show that anyone could ask for," before they capped things off with "You Can't Always Get What You Want."  It may have seemed a hypocritical choice, considering most of the crowd had such a marvelous time.  Unfortunately, my seat was directly in front of some tone-deaf fuck, who insisted on hissing along to every song.  The sole moment of relief came from "What the Fuck" because he didn't know the words.  I just don't understand why you'd go to a concert to sing louder than the artist onstage.  I wish more people could recognize their vocal limits and not hinder the experience of those around them.  Fun put on a great fucking show.  The guy behind me did not.

ENCORE I -
Some Nights > Stars