"For the first show of a tour, we like to play small, unimportant markets," Austin Hartley-Leonard of L.A.'s Broken Anchor informed the New York crowd.  "That's a joke.  It's important.  It's also large."  Their first time touring in the Northeast, they drew a pretty sizable Friday-night audience at Rockwood Music Hall's Stage 2.  When their debut LP is finally released this summer, I have no doubt the Anchor's going to make a big splash in this little town.

I got to the venue early and caught the last two songs of Portland's McDougall, stomping his feet to accompany himself on a banjo with a guitar's neck.  There were maybe ten of us in the room, but his gusto was infectious.  He was a nice, bearded amuse-bouche for the meal I'd been waiting for since I first heard Broken Anchor on NoiseTrade a little less than a month ago.  I've listened to all three of their EPs about sixteen times, and as you may remember, they grabbed the number one spot on my Top 15 Most Anticipated Albums list, beating out the likes of Bowie and Phoenix. 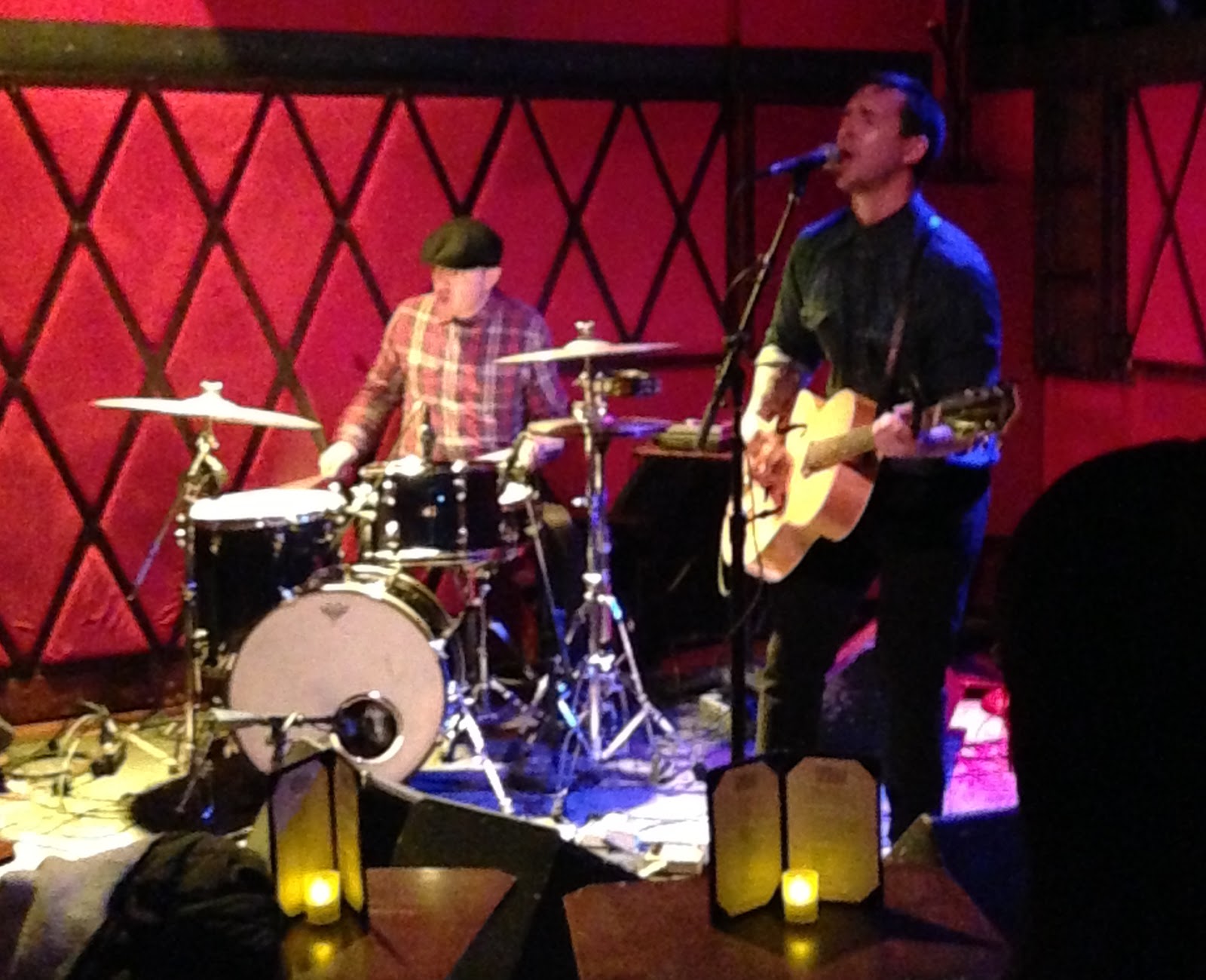 Austin took the stage with his lone bandmate, Mike Duffy, who manned the drumkit and a laptop that provided backing vocals and electronic washes.  They eased in with the song that shares their name, "Broken Anchor Blues."  For "Dear Diary," Austin slapped a vocal effect on his microphone that would remain for several more songs in the night.  I was initially turned off by it, but quickly realized its purpose in doubling his output to make everything sound like it was coming from a bigger band than the duo onstage.  "Say Serenity" was great all the way through its explosive ending, and halfway through "Stencil Heart" it ultimately hit me how relieved I was to finally be hearing these songs live.

For new tune "Head is a Hole," Austin cut his number of strings in half, trading his guitar for a bass with only three strings that he played capoed and with a pick.  While most of Hartley-Leonard's lyrics at least flirt with melancholy, this was clearly the most despondent song I've heard from them, with the chorus "My head is a hole in the ground."  "Automatic Midnight!" yelled someone from the balcony at its close.  "We have a Hot Snakes fan in the audience.  Dad?" deadpanned Austin.  It was, however, the perfect spot for the dour ditty, juxtaposed against "Always," which soared to anthemic heights, propelled by Duffy's blows on the toms with mallets instead of sticks.

After a more upbeat newbie, "My Marie," Austin took the opportunity to hawk some CDs: "Hand-stamped. Cardboard sleeve. Ink. Hand-stamped by me. You're welcome. Makes a great stocking stuffer."  He suggested more seasonably, "Late 'I'm sorry' Valentine's Day gift?"  After "Leave the Light On," which was more relaxed than its recorded counterpart, the sound guy noted the time.  "We got two more songs.  Right on track.  Pros," said Austin.  They chose "Ghosts," which was recently heard on "big-ass TV show," Private Practice, and "Never Leave Me Alone," the first single off the upcoming album.  The latter actually got a few crowd members dancing, which is a good sign.

I talked to Austin after the show, who told me the album would probably come out in June.  It's still at the top of my wantlist, and I'm predicting this band to take off, especially if they snag a bassist and keyboard player for live gigs.  Broken Anchor are performing a live acoustic concert at StageIt.com on the 19th, and will play a free "stripped-down" show as part of the American Folk Art Museum's Free Fridays next week.

P.S.  I stuck around to watch the thirteen members of King Holiday cram onto the tiny Rockwood stage.  I wanted a bit more range in the sparkly lead singer's voice, but he impressed me with his pained shouts into a telephone during "Dub of Love."  The Bed-Stuy crew will be playing Pianos on February 20th.