It's been one year since an incompetent 911 operator influenced me to start a blog. If you've read any of my entries, thank you. To celebrate, a young child devouring a mound of poop... 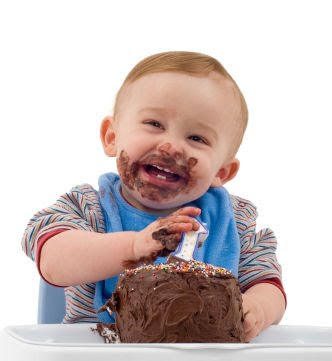 Another Craigslist finding. It was in the TV/Film/Radio section.

Seeking persons with strong mechanical and creative aptitude, with good upbeat attitude and the willingness to learn, follow direction and function in a team environment,
likes to work with your hands a must , plumbing and/or electrical and/ or mechanical background a plus, willing to travel ,must have text message and email skills,
no drinking or drug use, ex-military or law enforcement a plus, should be relatively fit, must be a US citizen , have a valid drivers license and a clean driving record.
Any guesses?
at 8:43 PM 1 comment:

New York City schools apparently have no bake sales because the nutritional value and ingredients of homemade goods cannot be defined. So a city panel is voting tomorrow on new rules that would allow students to sell fruits, vegetables, and the 27 packaged items approved for vending machine sale. When's the last time you knew how many calories or grams of sugar were in a banana? And correct me if I'm wrong, but doesn't the level fluctuate depending upon factors such as ripeness? Granted, bananas are probably better for you than chocolate chip cookies, but who would want to buy Spicy Sweet Chili Doritos for a fundraiser? Aren't you more tempted to buy things from bake sales because the treats are homemade? I guess they made this rule like nine months ago, and now they need to bring some fundraising back due to the poor economy. Want my opinion? Bring back the cookies, cupcakes, and brownies too. There's a New York Times' article about this, which can be read here. The most ridiculous thing is the photo they ran with it: 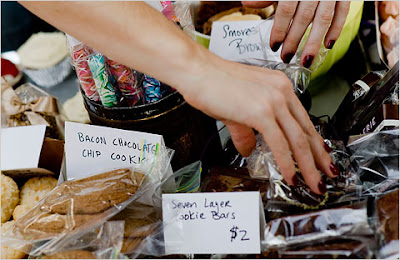 I went food shopping today and noticed Trader Joe's had kumquats. $2.99 for 12 oz. seemed like a good deal, but what would I know, being a kumquat virgin? My curiosity had been piqued by watching Muppet Babies as a child, but I'd always assumed they were just something invented by Jim Henson, like the weirdo species. Advertised as being entirely edible with sweet skin and tart flesh, that was a definite selling point, as opposed to pomegranates, which I love, but am always surprised when the waste seems to have more mass than the original fruit. Kumquats are about the size of cherry tomatoes, so just looking

at them quickly in the store, I imagined them tasting something like a sweet tomato. When I got home and opened the plastic container, I gave the fruits a sniff. They smelled like oranges and examining them closer, appeared to have a similar texture. After popping off the green caps, I washed a few and decided to feast. I hesitantly bit into the skin, which sort of tasted like oranges, but sweeter, a decent first taste. I bit into the fruit flesh to find it orange-like, but sort of like if you dipped an orange in something even more acidic, like I don't know, maybe HCl. It wasn't gag-inducing, but it wasn't super-pleasant either. As I took my second fleshy bite, I hit something hard. A fucking seed. Two actually. And that's where kumquats seem like a waste; their seeds are the same size as orange seeds. Having said all this, I think I ate seven in one sitting.
Pros: Fun name. Fun size. Entirely edible minus the seeds.
Cons: Big seeds. Sour as a mother. Fairly expensive now knowing the taste.
Verdict: Try them for the experience if you must. Otherwise, best used in Scrabble: Kumquat will get you 72 points with no premium squares!
at 6:16 PM No comments:

The Return of Dr. Tyrone McLouvrengradstein

This is no joke. This is copied straight from Craigslist.

A major production company is currently looking for Obese/Overweight Boys and Girls ages 3 years to 5 years for one afternoon of work.

We are seeking all ethnicities. However, the children MUST clearly be physically obese/fat.

There is a very short time commitment for this project- 1 to 3 hours if you are selected. Pay is $464. Selected talent will need to provide the necessary minor documents to work on set.

If you would like to be considered, please email the following information to jklcasting@sbcglobal.net:

Be Sure To Include “FAT TODDLER” in the subject line.
Apparently they did some study, and the magic number of cash required to totally admit to being a worthless parent and ruin your child's life is $464.
at 11:53 PM No comments:

In Honor of Presidents' Day...

There is a chance that Cahuenga Peak, the land surrounding the Hollywood sign, could become developed as was once its intent. If another $5 million isn't raised by April, this could become a reality. The issue is that the sign has become a symbol of Los Angeles, likened to New York's Statue of Liberty, Paris' Eiffel Tower, and San Francisco's Golden Gate Bridge. While it is sad that essentially a billboard is equated to

the previous structures, it is true. The sign is a protected landmark and will remain, but filling the hill around it with mansions will definitely hurt its iconic appearance. But am I concerned? No. In fact, I'm wondering why one rich fucking actor doesn't donate the remaining $5 million. Shit, get ten rich actors to split the cost. No doubt this money could be better served to assist Haiti or help with the national debt, but if that land is sold so rich motherfuckers can live in mansions on the hill, I will believe the rumors that this town has no soul... and leave.
Here's The New York Times article 'cause for some reason, the Los Angeles Times article sucked.
Here's an interesting site with the history of the Hollywood sign.
at 11:55 PM No comments:

Google just ran that absolutely classy Super Bowl ad and now they're gonna turn Gmail into Twitter? Please wake me up from this awful dream.

Google is getting ready to add social-networking features into Gmail as it attempts to jump-start its social Web strategy.

Gmail users can already set their status within the service, but Google plans to expand that into a stream of status updates found in services like Facebook and Twitter, according to sources familiar with the company's plans. Users will also be able to share photos and videos through the service, which is expected to launch shortly.

Read the rest of the bad news here.

I found this year's crop of Super Bowl ads insanely disappointing. Could it be because every ad was for Doritos, Bud Light, or those stupid fucking Etrade babies? Maybe it was because several ads stole their plots from The Simpsons, and the one that actually had The Simpsons sucked. Perhaps it was because more than one ad featured that staring hamster from three years ago. Whatever the reason, I figured I'd narrow it down to the top three, which was pretty easy.
3. Bud Light - Auto-Tune
With about 20% of all Super Bowl ads for Bud Light, they had to get it right once. The end is really the only good part, but I like it.
2. Denny's - Birthday
The element of surprise.
1. Google
I can't even explain everything that is right with this. From the typing errors to the subtle soundtrack, everything works perfectly. My only beef would be that Wikipedia is used as a source. For me, this is one of the most brilliant commercials I have ever seen. It's right up there with what I consider my favorite commercial ever...
The Google one really proves that bigger is not always better. Tell a good story. Crazily enough, the milk ad was actually directed by Michael Bay. It would serve him well to watch his best work again.
at 12:45 AM 1 comment:

I'm at the library, and a woman just pulled a copy of Blogging for Dummies off the shelf. Hmmn.
at 6:45 PM 1 comment:

The funniest thing I've read all day.
The whole website is hilarious. It's like they combined Yahoo! Answers with a bunch of retarded kids.
at 9:44 PM No comments: