Alabama Shakes Play Zeppelin on a Boat on Valentine's Day

With all the news of the poop-filled drama aboard the Carnival Triumph, it's hard to imagine anyone wanting to go on a cruise right now.  That is, unless you were one of the 125 fans lucky enough to win the chance to buy two tickets to see Alabama Shakes kick off the 13th annual Rocks Off Concert Cruise Season on the Destiny.  Fortunately for me, two of my friends won the lottery, so I didn't have to spend another Valentine's Day alone, weeping at home.

I had no idea there was going to be an opener, so it was a complete surprise when Brooklyn's Daddy Long Legs took the stage.  A three-piece blues outfit, they looked like they'd just stepped out of a photograph of a mid-'60s British rock band.  They got the crowd pumped up over the course of their rowdy ten-song set, spearheaded by some fantastic mouth harp-playing from the lanky singer only identified as Daddy Long Legs.  While his Shure Green Bullet may be the best mic for amplified harmonica, when it comes to vocals, it has about the fidelity of a school bus driver's loudspeaker, making it very difficult to discern the lyrics.  I almost bought the LP, but I'm waiting to hear samples before I commit to buying a record that I'll never know the words to.

A half-hour later, Alabama Shakes entered to the theme from Gilligan's Island over the PA.  "Thank you for coming to our boat party," greeted Brittany Howard, strapping on her guitar to start things off with "Hang Loose."  Having blown up even more since last I saw the band at Virgin Festival, the whole crowd sang along to "Hold On."  "Welcome to the Love Boat," said Brittany, handing out vulgar valentines like the two pictured here. 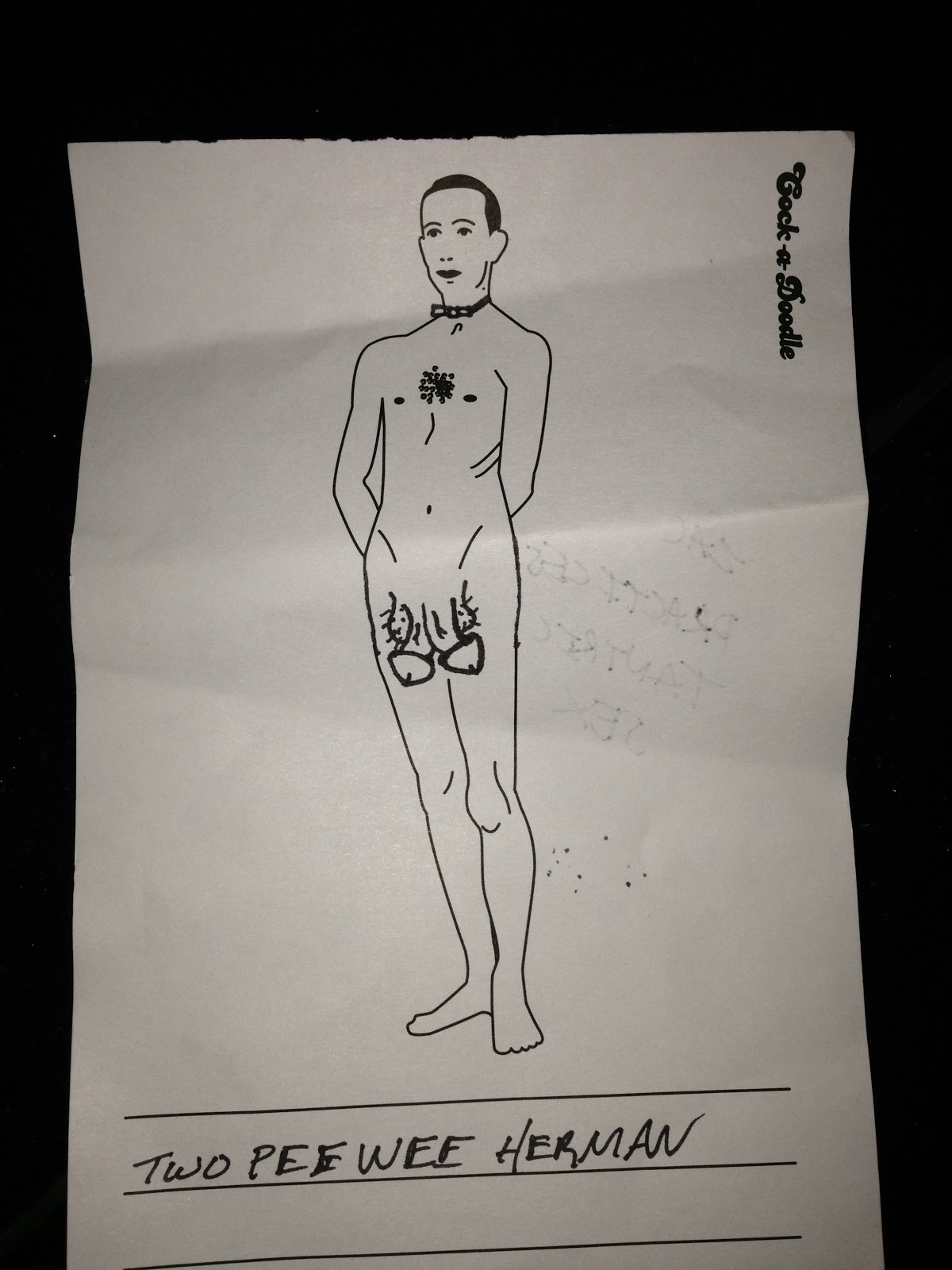 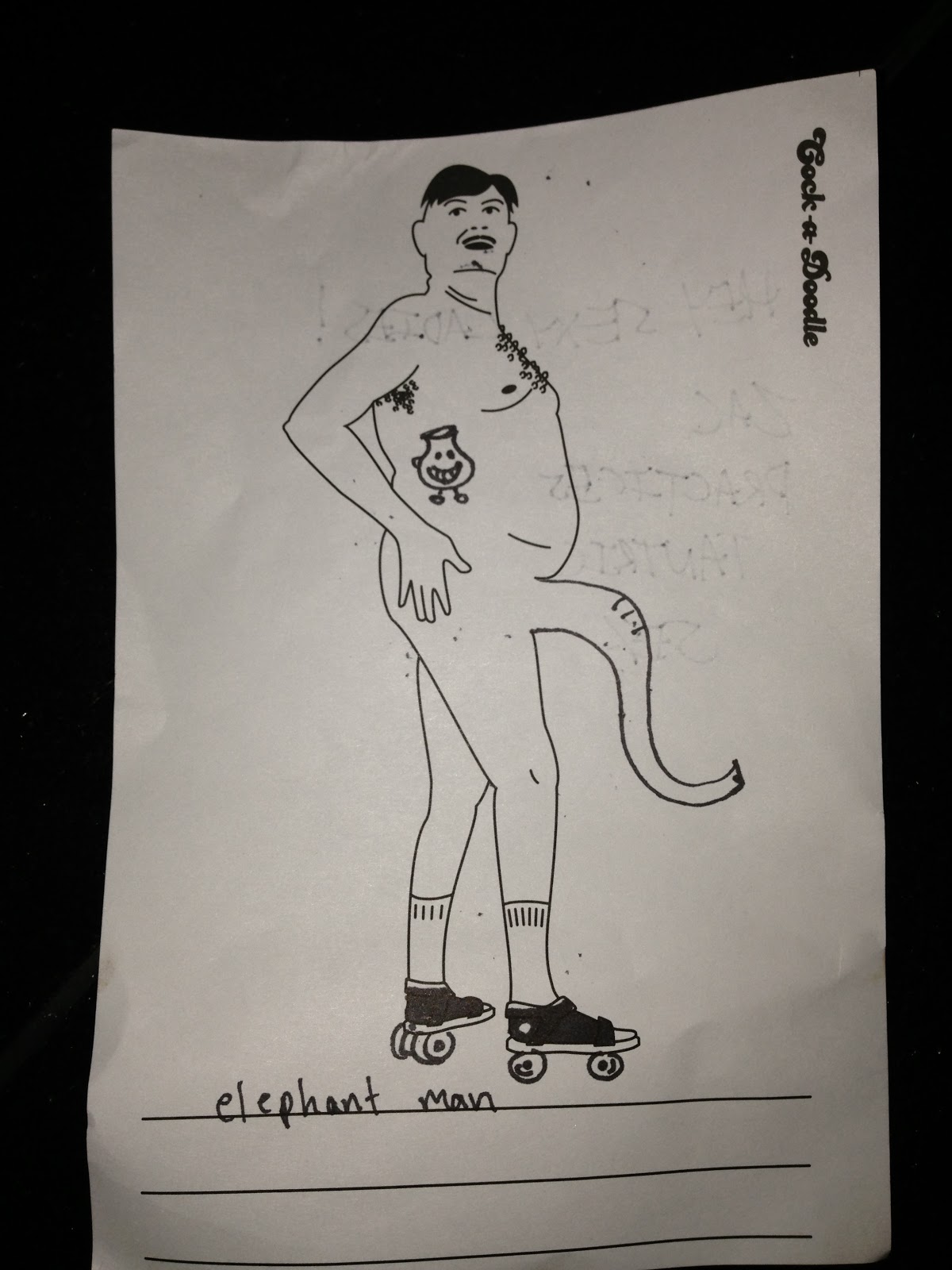 Due to the lack of a proper stage and minimal overhead lighting, the vibe on the boat was like a living room... if your living room was always floating down the Hudson River and full of people you don't know.  And with really great sound.  This was the second Rocks Off cruise I've been on, and I'm kind of amazed by the care the crew takes in making it sound better than many venues I've been to on land.  The intimacy of it was insane.  I'd always been able to see Brittany practically dislocate her jaw the way she opens her mouth when she sings, but now ten feet away, I could look down her throat!  In the past, I had expressed my frustration with Zac Cockrell's stage presence, but last night, he was my favorite one to watch.  Sporting overalls, a bushy beard, and a ballcap, he came out chewing a toothpick, looking more like a farmer than a guy in a Grammy-nominated rock band.  I think he was probably stoned or had really bad indigestion, as he played, the expressions on his face contorting along the gamut from pained teeth-clenching to cross-eyed ecstasy.  Keep making me eat my words from last June, Alabama Shakes. 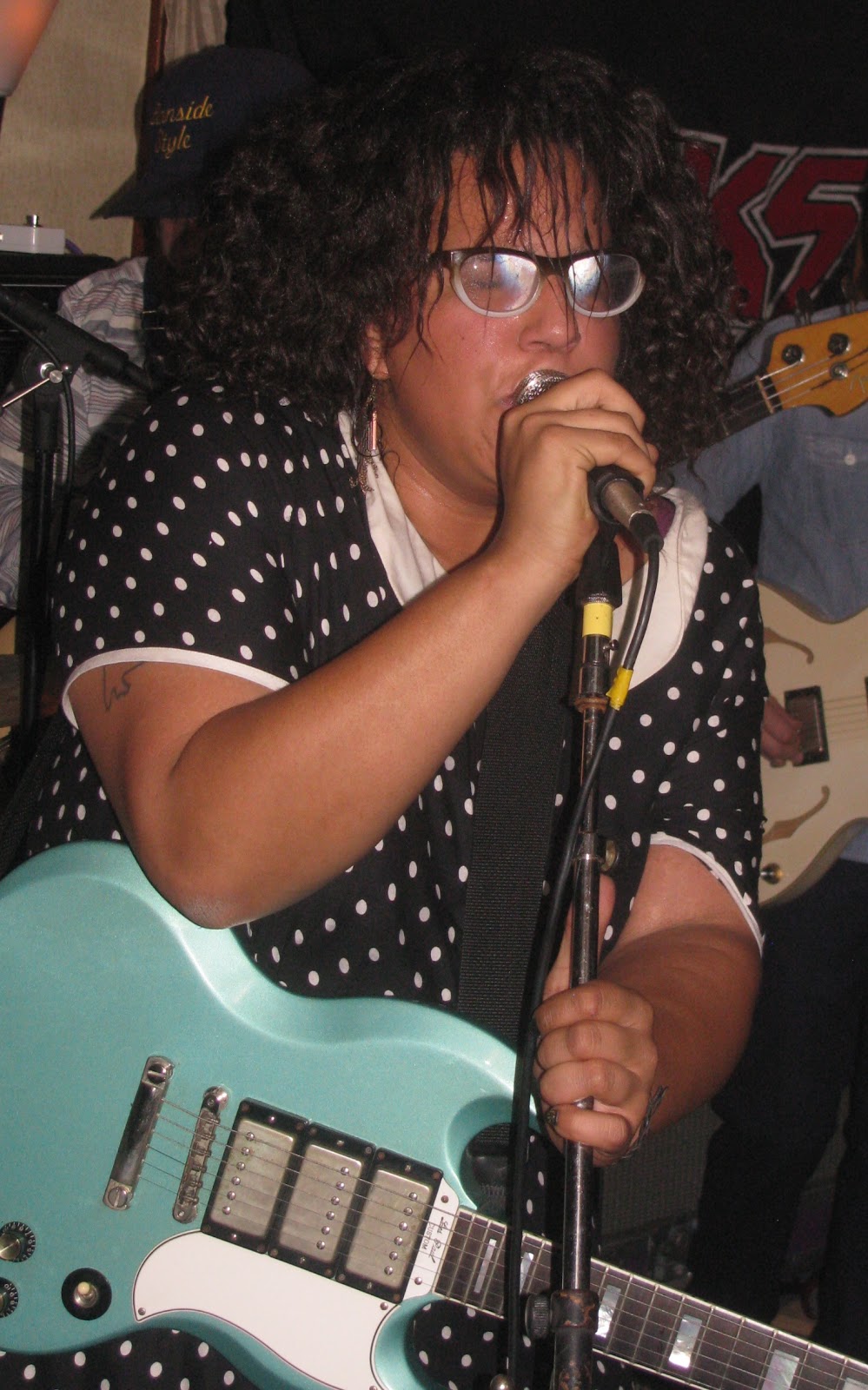 The boat really started rocking during "Always Alright," and the band were determined to rock even harder, fogging up the windows.  "Who woulda thought we'd get some boat windows steamy here tonight?" laughed Howard.  Following that was "Rise to the Sun," which featured a new spaghetti Western-style intro that was likely a tease of a song I couldn't place, so any insight is appreciated (Comment below.).  "I'm sorry I have to sing this to you on Valentine's Day," apologized Brittany ahead of "Heartbreaker."  She introduced the next song as a story about a friend she grew up with, who had told her they were getting too old to be friends.  "And I thought that was some bullshit," she proclaimed, easing into "Boys & Girls."  It was a little ridiculous how many people began talking during the slow number.  Don't you know where you are?  You're on a fucking boat with the fucking Alabama Shakes!  Some fans had enough of the chatter, and resorted to shushing and one yell of "Shut up!"  While I obviously always side with the quiet ones, yelling "Shut up!" in the middle of a song is even more disruptive.

Brittany put down her six-string and won everyone back with what I've come to see as their signature live song, "Be Mine."  All the more poignant on Valentine's Day, Brittany erupted in the last chorus, grabbing a few guys in the front row to dance with.  "Y'all warmed up?  I wanna rock and roll with this boat," she said.  Encouraging the crowd to sing along to the opening guitar lick to "Mama," she urged, "Come on now. You won tickets to here. Don't be shy."  I thought the performance was awesome, but Brittany wasn't feeling it from the room.  "Y'all didn't seem to like that one.  I'm not offended," she admitted, and offered up "Makin' Me Itch."  Some people started talking again (I feel bad for respectful fans that didn't win tickets.) during the slow build of "You Ain't Alone," but this time Brittany took action, inserting a "Listen to me now!" into the lyrics.  "I saw the Statue of Liberty for the first time tonight," shared Brittany before plunging into "Heavy Chevy," which sounded even better at a less frantic pace.  "This has been the best Valentine's Day of my life," she revealed, and I'm sure the feeling was mutual among some of the passengers.  "Heat Lightning," with its built-in thank yous, closed the show, Brittany getting right up in the faces of the front rowers, throwing the mic on the deck at the song's conclusion. 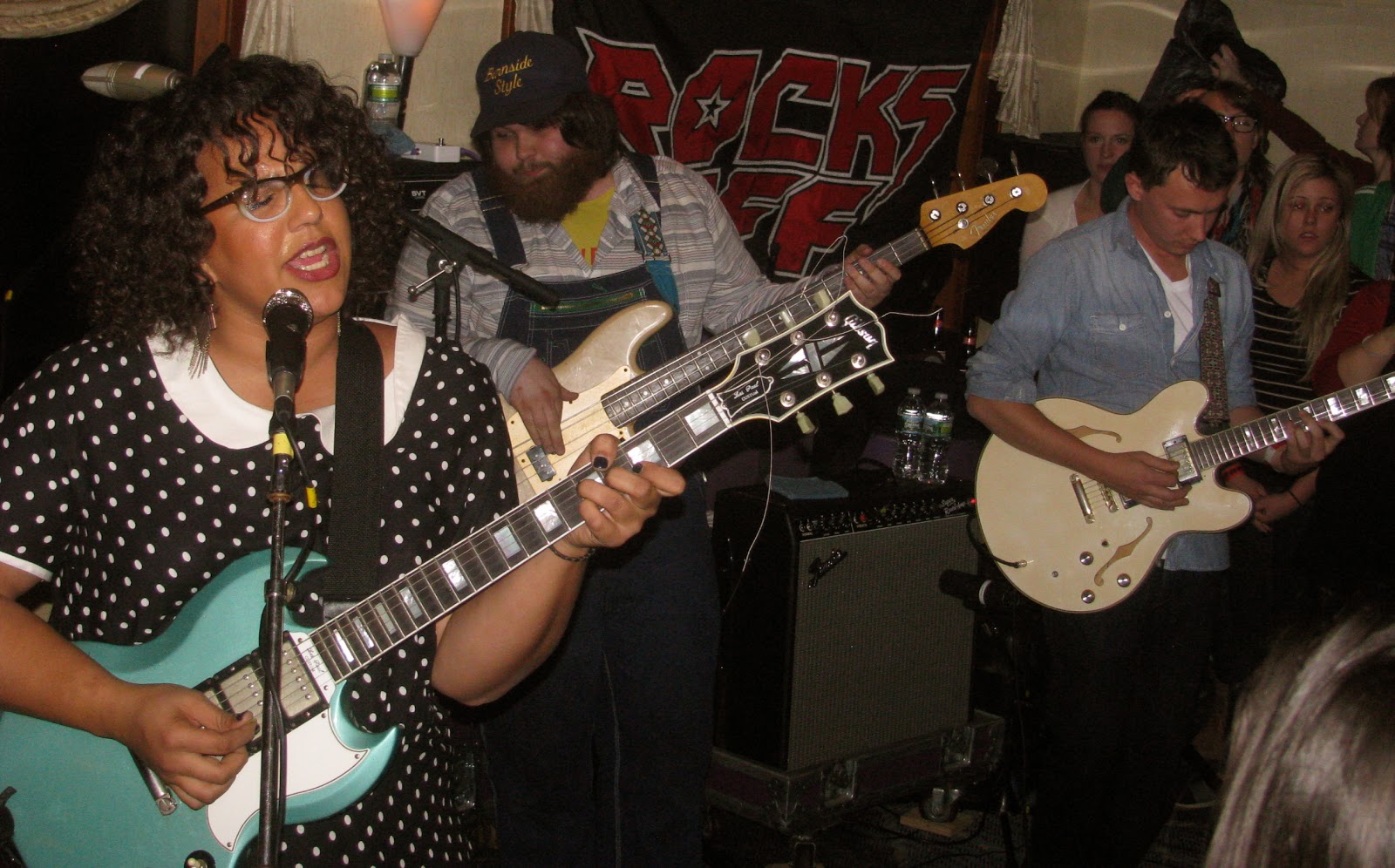 And then it happened.  They covered Led Zeppelin's epic "How Many More Times," with Brittany modifying the lyrics to fit her gender.  More than nine minutes later, the show was actually over, the band making their way to the ship's head.  Bruce Springsteen's "Adam Raised a Cain" was listed on the setlist before "Heat Lightning," but I'll take Zeppelin over the Boss any day.  Especially Valentine's Day.