They Might Be Giants & Ben Kweller Rock WHYY Connections Festival

After their stellar Celebrate Brooklyn gig, it was a no-brainer to venture to the City of Brotherly Love for another They Might Be Giants "no-dough" show, this time at the WHYY Connections Festival.  We got to Philly a little early to take in some of the sights on the gorgeous day.  Following a tour of Independence Hall (looks the same as it did in 8th grade!), we waited in line for cheesesteaks (with whiz!) at Jim's Steaks on South St.  After struggling to find the entrance, we finally made our way into Penn's Landing, taking a concrete seat in the small amphitheater overlooking the Delaware River. 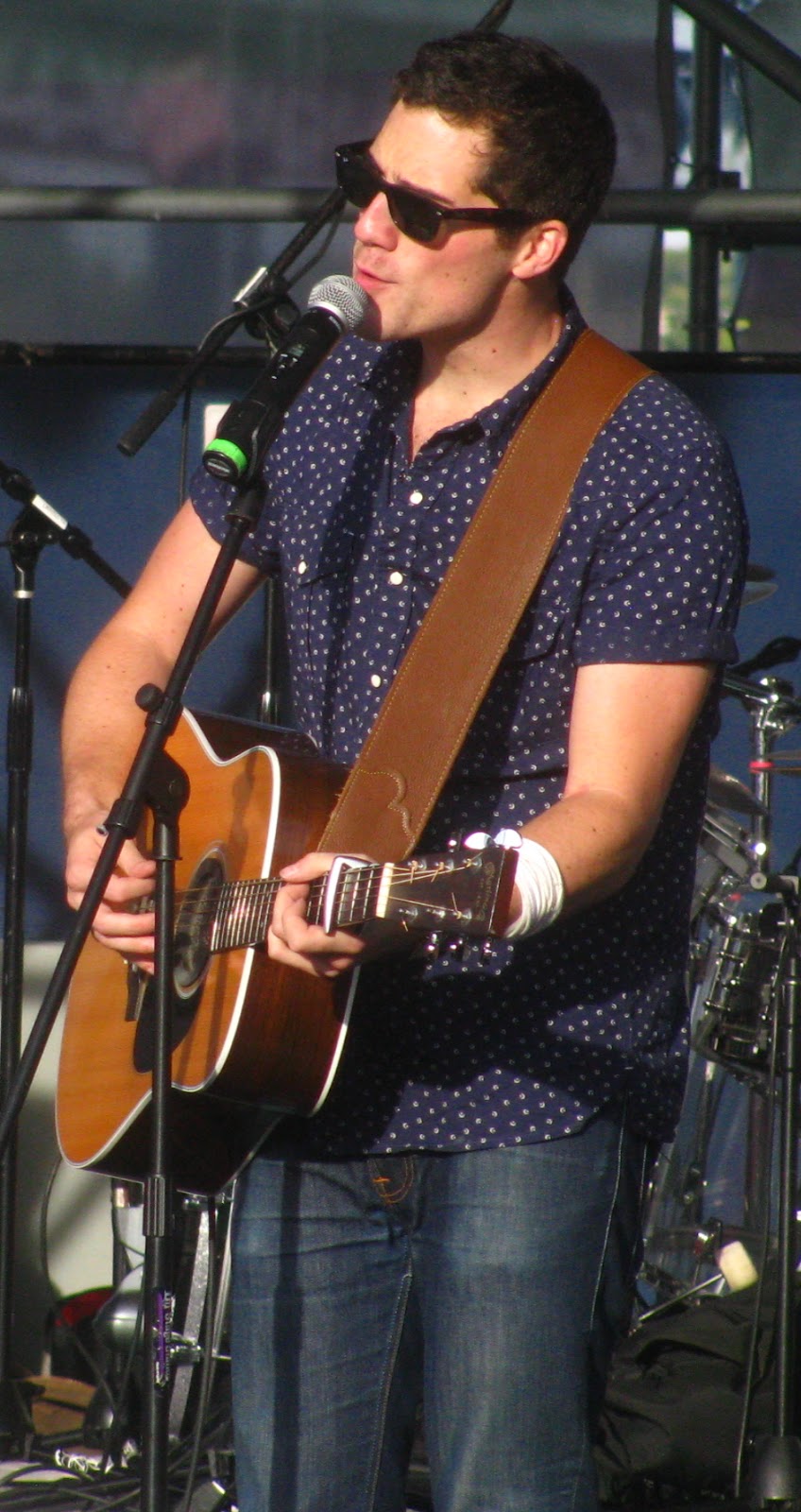 Philadelphia's own Jesse Ruben was onstage when we arrived, strumming an acoustic guitar and singing "If I Only Had a Heart."  I don't know that the singer-songwriter had expected to be playing to an audience half-comprised of toddlers, but he felt right at home, adapting the stories before his songs for the younger crowd.  "This is the cutest mosh pit ever," he commented on the gaggle of dancing kids that had taken over the area directly in front of the stage.  Following a batch of love songs, including "Bleecker & 6th" and "Love, Don't Turn Your Back on Me Now," Jesse said that it was time for him to go: "I've only got one positive song.  I saved it for the end."  Laughs from the parents. "It's about doing awesome stuff," he translated for the kids, and launched into "We Can."  My post-show research revealed that Ruben has been using the song as part of his "I Can" Initiative, where he travels to schools to teach students that we all can make a difference.  Now it all makes sense why he was able to handle the crowd so deftly. 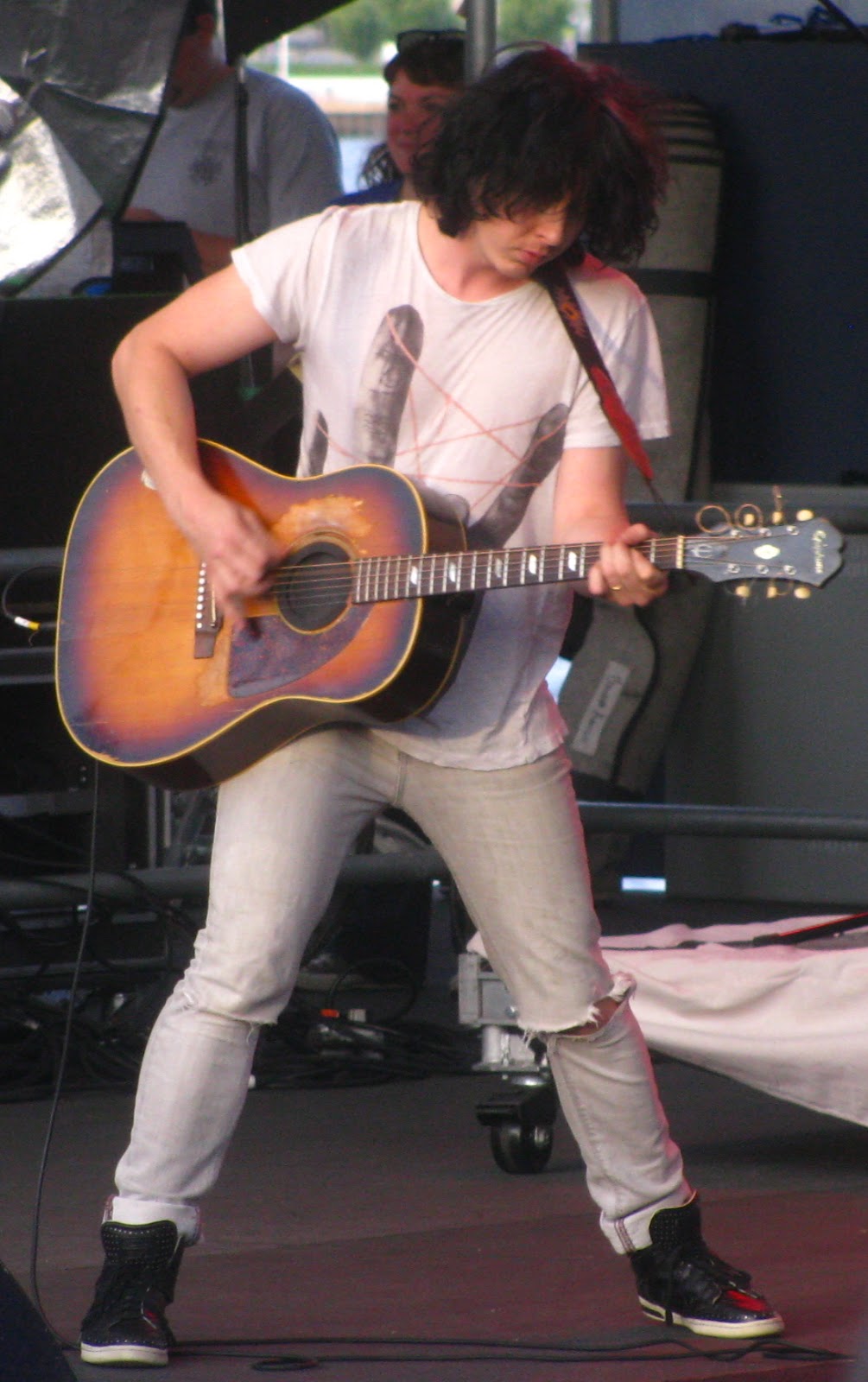 Also no stranger to free concerts, Ben Kweller took the stage for a 45-minute solo set after a quick soundcheck.  Plugging in an acoustic guitar and piling on the distortion, Kweller chugged through "Mean to Me" and then switched the pedal off for a relaxed take on "Commerce, TX."  "I like the dance party," he said, motioning to the kids that still commanded the floor section.  Kweller shook his rat's nest of dyed hair as he cranked out a hard-edged solo for "The Rules" and then pulled things back for "Full Circle."  "I'm from Austin, TX, so I'm gonna play a quick country song," he announced prior to "Fight."  Following "Lizzy," Kweller retired his six-string, and moved to the piano for the waltz of "Gossip."  Towards the tune's finale, Ben asked, "Actually, can you sing this with me?"  The crowd joined in on the chorus and even took it one round past the song's end.  "See, you don't wanna stop," Ben laughed.  "That's the thing about gossip, I guess.  It keeps on going and going."  He abandoned "Thirteen" after deeming it "too downtempo," choosing to play "Falling" instead.  With just Ben at the piano, it was the first time I noticed how well the number would into a Broadway musical, with its soaring chord progressions and introspective lyrics.  Kweller went back to the guitar for a subdued "On My Way" and a rocking "Jealous Girl."  Tinkling out the first notes on the piano, Kweller asked the sound guy, "Can I get some more guitar?  I really need it for this one, man," and finished "Penny on the Train Track" on his acoustic, adding little asides into the lyrics.

As the sun disappeared behind us, the question loomed: With all the little ones present, would TMBG be modifying their setlist to include some family-friendly numbers from their four children's albums?  If the pack of nerds swarming the standing room once inhabited by dancing kiddies wasn't evidence enough, Dan Miller emerging to dive into "You're on Fire" answered my query.  This was a rocking adult show.  But make no mistake, the kids loved it too, twirling crazily in the aisles in their light-up shoes.  "Hey, horn guys!  Showtime!" yelled John Flansburgh.  Now labeled the Horn Guys for the remainder of the concert, the Tricerachops Horns joined the band for "Withered Hope," each taking a solo.  "The Guitar" went the disco route that it's been going this year, but They were hitting the groove even tighter than normal, and you could see it on the smile on Flansy's face.  The robo-vocals came out a little too sterile on "Nanobots," which I'll chalk up to the Riverstage sound system.  Then Flansburgh encouraged the crowd to stand for what he referred to as They Might Be Giants' "National Anthem," "Damn Good Times." 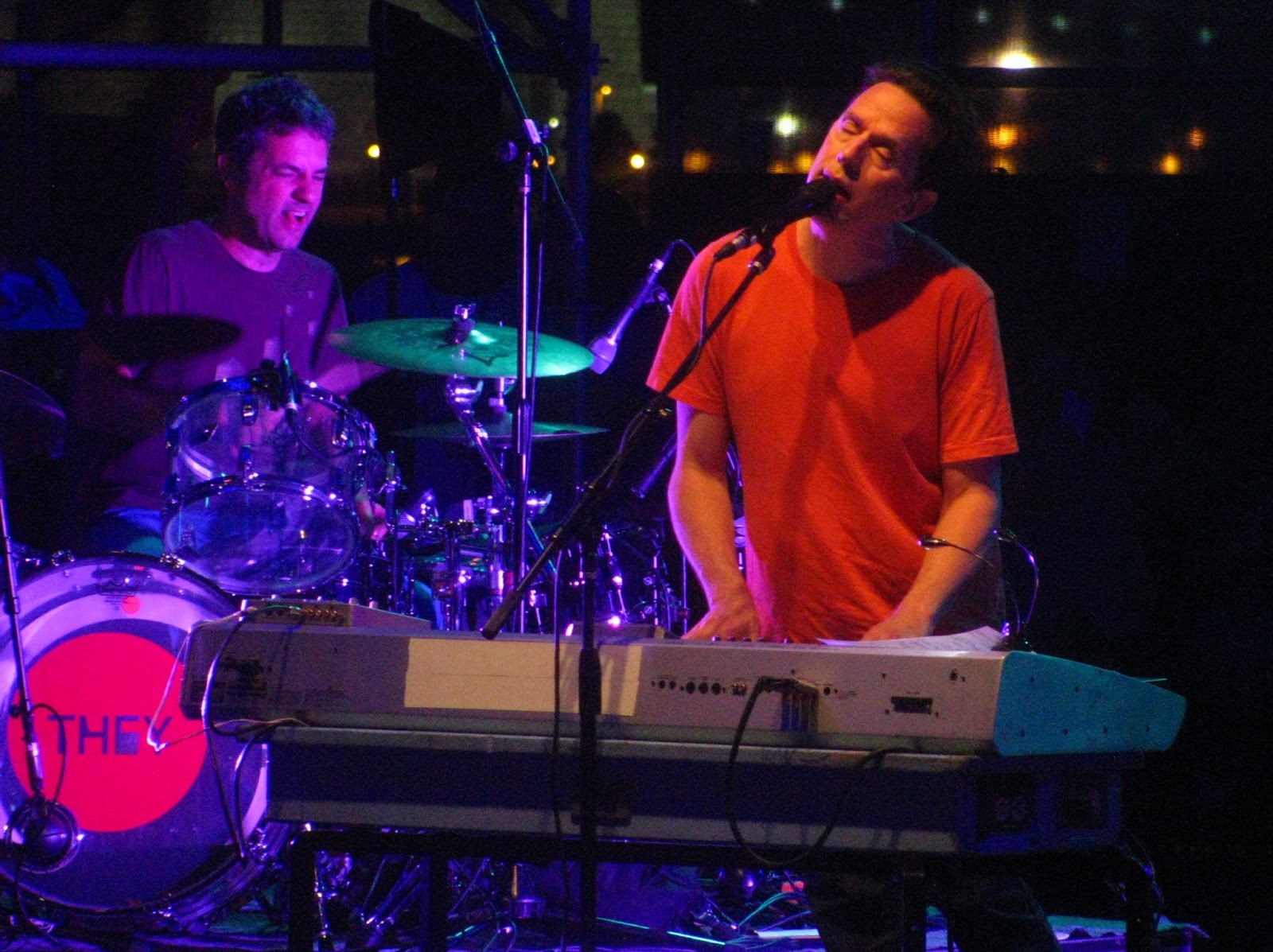 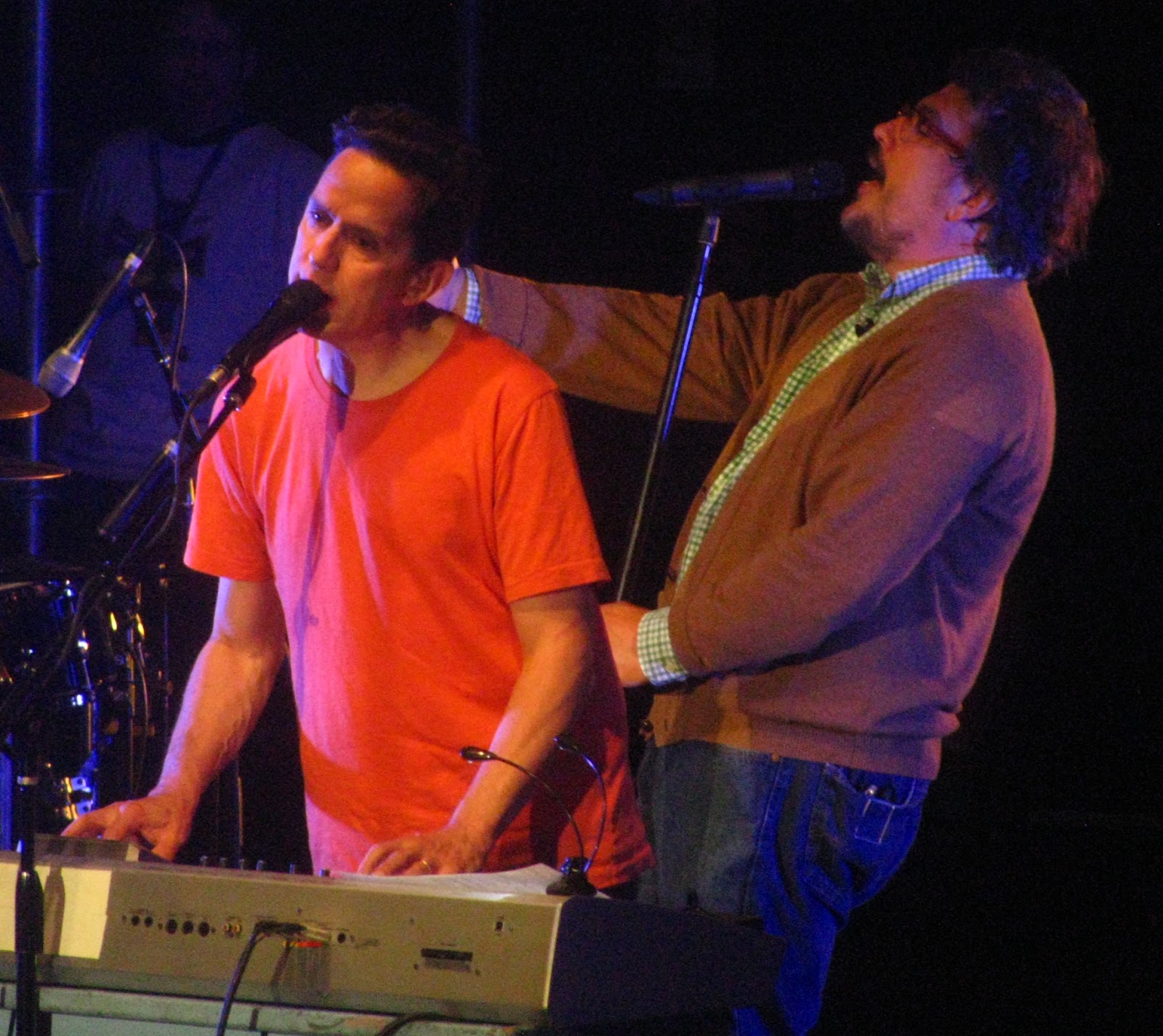 In a departure from the Brooklyn gig, They divided the crowd in two for the "Battle for the Planet of the Apes."  "People who are sitting down, stand up.  Don't make me resort to swear words in front of so many children," JF warned.  The battle commenced, and Flans even held out his left-handed Telecaster for some front-row apes to play.  The people won, but the apes didn't take the loss well, as the chant resurrected itself multiple times in the evening.  A lot of the show unfolded similarly to the Brooklyn show, but the "New York City > Ana Ng" segue still gave me shivers.  Dan Levine blessed us with a lengthy trombone lead-in to "Istanbul," though it was marred with crackling noises from the speakers.  However, that was nothing compared to what happened next, when the band took on "I'll Sink Manhattan" as fireworks erupted from the Camden-side of the river.  The explosions were only audible during certain sections of the tune, so they enhanced the performance instead of detracting from it.  "Let's hear it for those wireless things!" yelled Flansburgh, who had assumed interference had caused the popping sounds.  Stagehands directed his attention to the pyrotechnics behind him, and he chuckled, "This is in our rider."  They finished the set with a firework-speckled "Call You Mom" and "Birdhouse in Your Soul."

As soon as They stepped off the stage, the cheer began: "Apes!  Apes!  Apes!"  Marty Beller came back out and started up "123 Band Intro," which featured a funny vocal section from John Linnell.  "Hey, Mr. DJ" closed things out, swapping spots with "Birdhouse" since Prospect Park.  While I would've preferred a little more deviation from the last show, I couldn't complain.  If I complained about perfect weather, fireworks, and cheesesteaks, I'd be a real asshole. 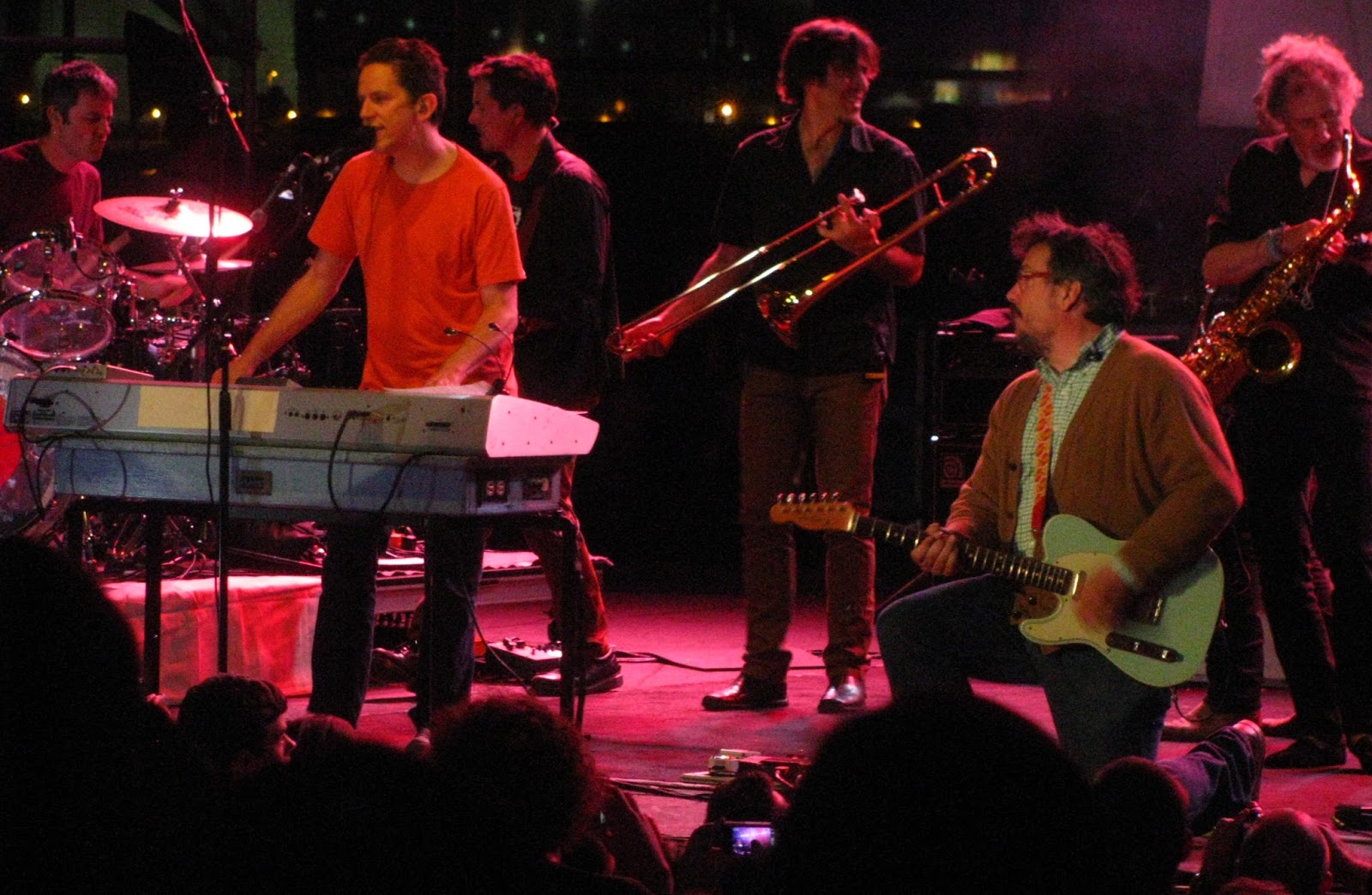