It's been almost a year since I saw Kishi Bashi open for Delta Spirit and Dr. Dog in Central Park.  I'd seen him twice before that, and once this summer.  And I'll keep seeing him.  Because once you witness K. Ishibashi at work--looping his violin, beatboxing, and singing in Japanese falsetto--you're so amazed that you have to see what he'll do next time.  Over the past year-and-a-half, more fans have jumped on the Kishi Bashi bandwagon.  Those fans bring friends, continually growing K's audience so that he has to play increasingly larger venues each time he returns to New York.  Last night he played Irving Plaza, which is the largest venue in the city that still feels intimate.

The opening act was Elizabeth & the Catapult, the stage name of Elizabeth Ziman, who I'd seen perform with Kishi Bashi at Prospect Park.  Ziman took the stage alone, sitting down at a keyboard to perform LCD Soundsystem's "New York, I Love You But You're Bringing Me Down."  Tossing what appeared to be the song's lyrics into the crowd at its end, she transitioned into her own "Thank You for Nothing."  A four-piece band joined her for "Salt of the Earth," one of several tracks played from her upcoming album, Like It Never Happened.  "This is a song my mom doesn't really like.  She's in the crowd tonight," Ziman revealed before "I Wish I Didn't."  While the profanity-laced lyrics might make her mother cringe, I'm sure she's still proud of her daughter's ability to make such a catchy slow-burning indie pop song.  Though the setlist favored the new tunes, Ziman still found time to sneak in a few from her previous LPs, dedicating "Taller Children" to Kishi Bashi's daughter ("I'm not just kissing ass right now."), and getting the crowd moving with the jagged guitar and blasting drum pad of "Go Away My Lover."  They wrapped things up with a cover of Dawes' "When My Time Comes" that procured some whoops from the audience. 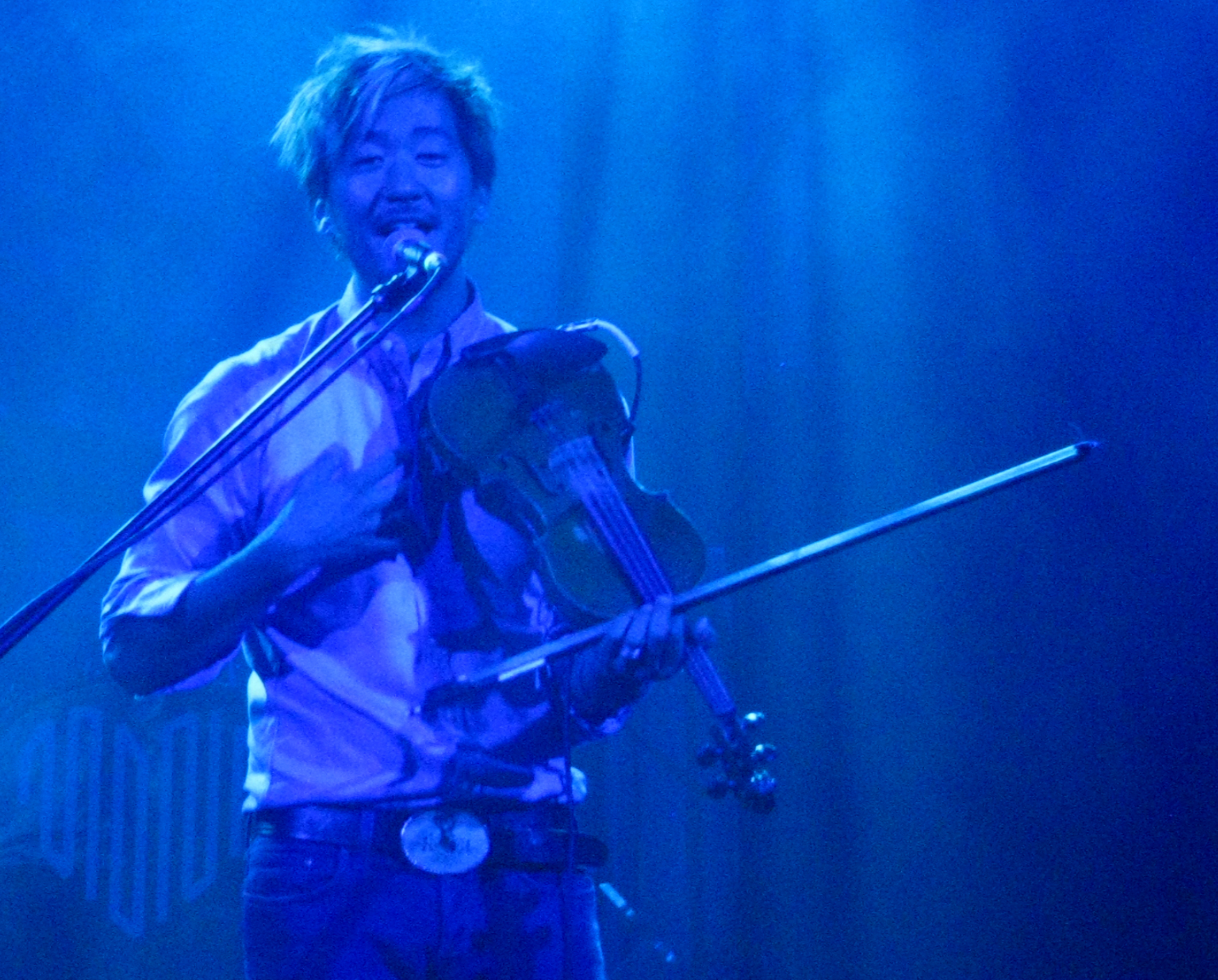 The lights went down, and Kishi Bashi approached his violin.  Beginning with an improvisation, he moved into "Evalyn, Summer Has Arrived," and was quickly joined by Mike "Tall Tall Trees" Savino on his part-banjo, part-drum, part-Christmas decoration.  Unfortunately, the speakers in the venue were clipping throughout the song, and the problem wasn't remedied until the encore.  Normally such issues would irk me to no end, but the sound was likely just interference from the electricity in the room.  For as soon as "Evalyn" ended, a deafening cheer shattered the spellbound silence of the crowd.  It was like watching the gymnastics finals in the Olympics, and some girl just rocked a perfect 10 on her floor routine.  After "Atticus," K and Mike were joined by Daniel Brunner on bass and to my surprise, David Heilman on drums.  (David played drums for K's indie rock band Jupiter One, who I saw in 2009.)  While the rhythm section may have kicked "It All Began with a Burst" into high gear, it was the crowd that truly made it blossom, clapping along and singing "ay yi yi" as Kishi Bashi held out his microphone.  "Would you guys like to hear a new song?" K asked.  "Please.  Please," said some overly excited lady near me.  Kishi Bashi also has a new record coming out next year, so he treated us to two songs that might be on it: "Q&A" and "Carry On, Phenomenon."  Noticing he was wearing the same shoes and jacket as he wore at Prospect Park, K decided to flaunt the only different item in his wardrobe, his shirt.  Heilman teased "Fever" as K stripped off his jacket.  "Let's do some oldies but goodies.  This is from my best-of first album," he chuckled, launching into "Chester's Burst Over the Hamptons," which he strung together with "Beat the Bright Out of Me" and "Conversations at the End of the World" with improvised violin bits.  Now the only person onstage, K went into musical magician mode as he looped his way through "I Am the Antichrist to You."  "I hope that was as good for you as it was for me," he remarked.  It was.  Elizabeth emerged from the left wing and walked behind him across the stage, sheepishly admitting she wanted to watch from the other side.  He then played new number "Philosophize in It! Chemicalize with It!" his vocals fluttering beautifully on the top.  I really liked this one, and I'm super-glad I was able to get it on limited edition 7".  K finished the set with "Manchester," gently plucking on his violin amidst the insect swarm he'd just created with it.  The crowd sang along shockingly well, with enough restraint to not overpower the man onstage.  It turned out they were saving their voices for the final thunderous cry as Kishi Bashi left the stage.

But you can't keep a roaring crowd waiting for too long, so K and band returned to the stage in under a minute.  "This is a song called 'Mr. Steak,'" K shared.  Awkward laugh from the audience.  "It is.  Sorry.  It's probably gonna be on the new album," he added nervously.  "Sorry for vegetarians.  It's about steak.  It's about a steak that likes to dance."  There was no need for apologies though.  The four-on-the-floor dance number was a blast, and allowed K to partake in some much-deserved jumping for joy.  (It can get stuffy stuck behind those looping pedals all the time.)  Elizabeth came out again, this time not to watch, but to harmonize and play tambourine on "Bright Whites."  As the song came to its conclusion, we all figured the concert was over.  Then Brunner revved up "Whole Lotta Love," and Kishi Bashi leapt into the crowd to ride on the hands of his admirers.  Crowdmembers who weren't even in his path stampeded across the floor just to touch him.  He surfed his way back to the front, and injected some fiddle into the rock classic to cap it all off.  While I hope the venues he performs at don't get too massive for intimacy's sake, it's clear he's worthy of packing them. 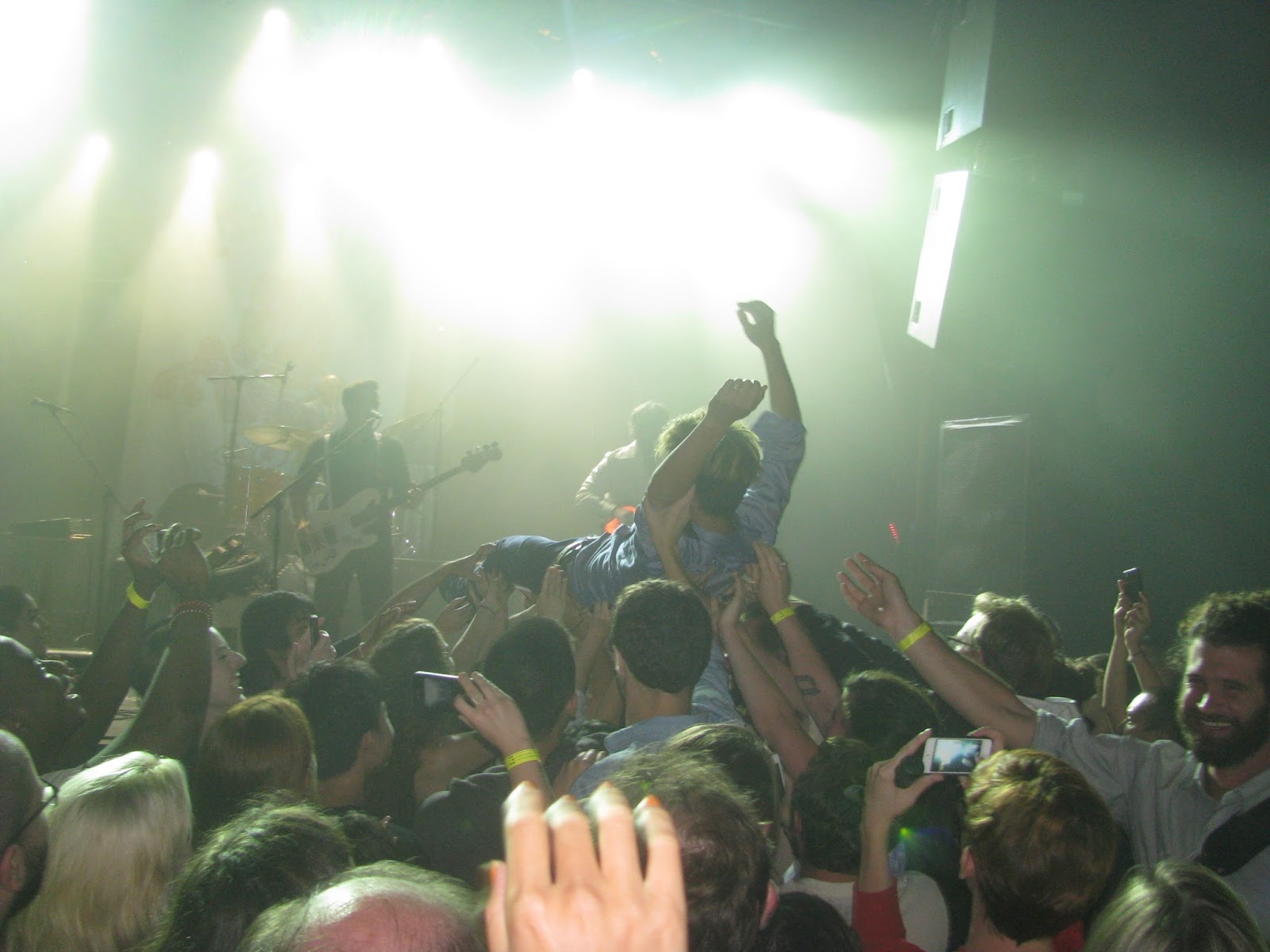 SET -
New York, I Love You But You're Bringing Me Down > Thank You for Nothing / Salt of the Earth / I Wish I Didn't / Happy Pop / Taller Children / Shoelaces / Last Opus / Like a Baby Bluebird* / Go Away My Lover / When My Time Comes

SET -
Intro > Evalyn, Summer Has Arrived / Atticus, In the Desert / It All Began with a Burst / Wonder Woman, Wonder Me / Q&A / Carry On, Phenomenon / Fever (tease) / Chester's Burst Over the Hamptons > Beat the Bright Out of Me > Conversations at the End of the World / I Am the Antichrist to You / Philosophize in It! Chemicalize with It! / Manchester