"It will be the greatest night of all time!" tweeted They Might Be Giants yesterday before their Celebrate Brooklyn concert in Prospect Park.  Even with setting expectations the highest they could possibly be, They indubitably brought their A-game.  Shaking up the setlist and digging deep into their back catalog, TMBG unleashed the best show I've seen from them since 2005.  Maybe even 2004.

When I got to the venue, the standing room in front of the stage was sparsely populated.  That all changed as soon as Wenzl McGowen blew his saxophone up through a long construction cone in "Tubes."  People poured into the area to watch Moon Hooch, toddlers dancing on their shoulders.  Over the course of 32 non-stop minutes, the trio took the crowd on a journey deeper and deeper into their cave.  The theatrics of saxmen McGowen and Mike Wilbur kept the audience attentive, whether miming a tug-o-war in "Number 2" or McGowen deploying a goose honk at the front rows in "Number 9."  Following the set, Wenzl got emotional as he admitted that sitting in the Bandshell crowd four years ago, he thought to himself, "Damn, I gotta play this stage at some point in my life."  He added, "It's always funny that the universe provides."  Some fans wanted them to continue providing, starting a substantial chorus of "One more song!" but the show was already running behind.

As the lights went down for the main event, the mangled Sammy Davis, Jr. intro music played, and Dan Miller entered alone.  He picked up his electric guitar and started cranking out the riff to "You're on Fire."  He kept plugging away until the other members ran out to join him, John Linnell sporting a new haircut.  Taking stock of the crowd, Linnell offered, "Beautiful spread."  "This is the nicest brownstone I've ever been to," confirmed John Flansburgh.  "Withered Hope," came next, assisted by the Tricerachops Horns, who would accompany on ten numbers throughout the night.  Prior to "Nanobots," the Johns did a bit with JF speaking through his robot mic.  "What have you been doing in August?" Robot-Flans questioned Linnell.  "I've been lying on the floor with a damp cloth over my forehead," JL responded.  "It's funny because I know that," he said, breaking character to laugh.  Explaining how he'd taken a part-time job with NSA, Flans continued, "I've been reading your instant messages.  Like this morning: 'Adjusted the damp cloth on my forehead.'"  The horns were dismissed for "Damn Good Times," which benefited from a nice Dan Miller solo.  For "Icky," Miller played the melodica, a fitting instrument for the song, as Flans revealed its tube may have been confiscated by the health department. 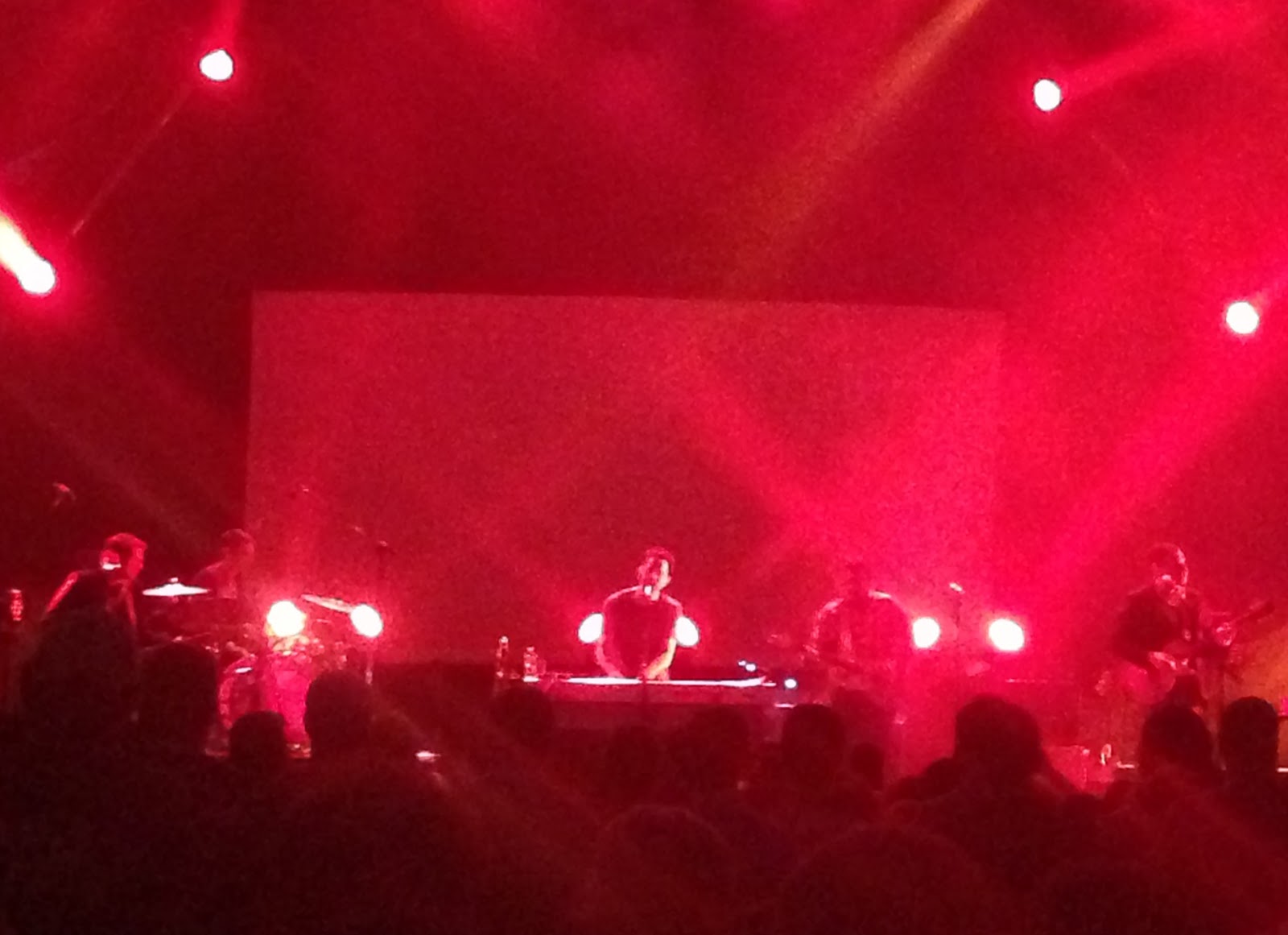 When the band eased into "New York City" for their seventh song, I knew this show was different.  The tune is usually reserved for encores, especially when performed in NYC.  And then the band made one of the most inspired segues I've seen, injecting into its finale the crashing chords of "Ana Ng," effectively reacquainting NYC with its '64 World's Fair.  The Tricerachops Horns returned for another typical late-set tune, "When Will You Die," and it was interesting to watch parents dancing with their children in the aisles to such morbid lyrics.  The horns departed once more, and Flansburgh shared some advice from his father: "Whenever you're performing in front of 10 to 13,000 people, do not play a new song."  In defiance of his dad, Flansy unveiled a new, rocking version of "Black Ops" with JL on bass clarinet.  Linnell held onto the instrument for another Flansburgh-sung tune, "Cloisonné."  At its end, Flans led a crowd chant of "Bass clarinet!" that began to pick up steam.  Linnell attempted his own refrain of "The cheese stands alone!" but it didn't take.  While "The Mesopotamians" is far from my favorite TMBG song, I found myself singing along as I marveled at the lights, which were on point the entire show.  Dedicated to all the apartment-dwellers, "We Live in a Dump" followed, my first time seeing it live.  And then "Don't Let's Start?"  Damn, They were not messing around.

Then They surprised us all with the performance of the night.  Stripping themselves down to the original duo, the Johns took on "Istanbul (Not Constantinople)."  Having grown so accustomed to the show-closing full-bander with elongated Dan Miller acoustic intro, it was incredibly refreshing to hear it this way.  The song morphed into a comedy sketch as Flans whimpered to be taken back to Constantinople, each request of "Please?" or "Once?" met with a tugboat's "Noooooo" from Linnell.  The crowd howled with laughter at every refusal.  After that, They could've just coasted for the show's remainder, but They took no prisoners, dropping "Lost My Mind," "Puppet Head," "Doctor Worm," and super-rarity "I'll Sink Manhattan."  After a horn-speckled "Call You Mom," Flans announced that the band would be playing their debut album in full at Terminal 5 in November.  "We've been working in conjunction with NASA to come up with a special ticket code," he said, attesting that it could be found in the Perseid meteor shower.  (I won't share the code here because I'm going to try to buy tickets at the venue when they go on sale.  I can't stand service fees.  Flansburgh shared his feelings on the modern ticketing mechanism as well: "It's like a shitstorm from outer space.")  "We've got one more song.  It's from our second album, and it's called 'Mr. Me,'" said JF.  And then They launched into "Hey, Mr. DJ."  Had I heard him incorrectly?  No matter; I took the trade-up.

Marty Beller returned to take a seat at his drumkit to rev up the clap-happy "123 Band Intro," which saw Danny Weinkauf playing his bass with a drumstick.  The sleepy "Tesla" seemed out of place for the encore, but after such an energetic set, I understood.  Flansburgh upheld my suspicion, and admitted he flubbed the "Mr. DJ" thing.  So They invited the horns back out, and performed "Mr. Me" as a "special dedication to all the people who got their hopes up."  After such a spectacular run of songs, truth be told, I'd forgotten about "Birdhouse."  Then They played it, in all its glory, bringing the concert to its triumphant conclusion.

SET -
You're on Fire / Withered Hope / The Guitar (The Lion Sleeps Tonight) / Nanobots / Damn Good Times / Icky / New York City > Ana Ng / When Will You Die / Black Ops / Cloisonné / The Mesopotamians / We Live in a Dump / Don't Let's Start / Istanbul (Not Constantinople) / Lost My Mind / Put Your Hand Inside the Puppet Head / Doctor Worm / I'll Sink Manhattan / Call You Mom / Hey, Mr. DJ, I Thought You Said We Had a Deal