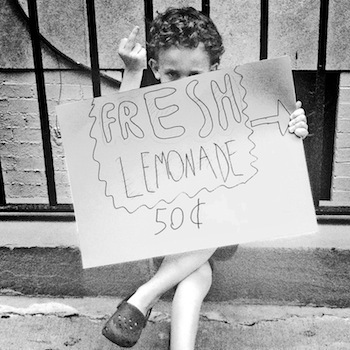 Pretty much anyone can make lemonade. It only has three ingredients: sugar, water, and lemon juice. Its simplicity and low production cost make it the commodity of choice for budding sidewalk entrepreneurs like the one featured on the cover of Broken Anchor's debut album, Fresh Lemonade, out 9/17.  When it's good, there are few things more refreshing than a tall, cold glass. But there's also a lot of shitty lemonade: too sweet, too sour, too artificial.  Austin Hartley-Leonard and his collaborators aren't drastically altering the recipe for indie rock music; they're just using better ingredients.  You won't find quality songwriting like this in the freezer section.  The first thing you'll notice is Hartley-Leonard's crackling voice.  It's at once unique and familiar, capable of both soaring to anthemic heights on "Always" or brooding gravely in "Head is a Hole."  While their sound draws heavily from the Pacific Northwest, the SoCal roots shine through unabashedly on the '60s reverb-drenched "Canada."  I dare you to listen to it once without smiling. Then I dare you to listen again without singing along.  My only gripe is that six of the songs were previously released on a handful of 2012 EPs. Thankfully, they are nowhere near filler, and come across more like greatest hits.  So don't judge it by its cover and let the toddler with his middle finger up deter you; you'll miss out on one of the year's best releases.

I interviewed Austin for The Next Round podcast, which will be up as soon as I slash through all the feed-hosting red tape.
at 10:21 PM