Last night at Rockwood Music Hall, Goldspot celebrated the release of their third album, Aerogramme.  It's Siddhartha Khosla's most personal record yet, drawing from childhood summers spent in India, the love for his wife during tough times, and the unsent letters of his father, who immigrated to the U.S. in the 1970s.  Occasionally when artists stock their set heavily with new tunes, the audience can become estranged.  Goldspot played eight numbers from the new LP, and the momentum never faltered, a testament to the strength of the songs and the band's stage presence.

Khosla started the night on bouzouki for the album's opening track "Abyss."  Keeping with the theme of turning back the clock, they followed with "Rewind," enlisting the string talents of violinist Rachel Golub.  Sidd thanked everyone for attending, and began a story: "When my parents came to this country in the late '70s, they came with $8 in their pockets.  My mother was pregnant, and a year later, they had me."  A voice from the crowd.  It was Sidd's mother.  "She just said 9 months," he said with a laugh.  "Weren't you 3 months pregnant when you left India?"  The debate over his gestation period became too humorous for the seriousness of the tale, so he abandoned it for "The Border Line."  (To hear Sidd tell the rest of the story, you'll have to tune in to The Next Round podcast, coming in the next few weeks.)

Sidd may have been raised on the records of Bollywood playback singers, who leant their vocals for actors to lip-sync to, but it's clear he also belongs in the spotlight.  He gave it his all on every lyric, even singing along off-mic to the trombone part on "New Haven Green" when there weren't lyrics to sing.  Well-versed in several instruments, he moved with ease from Omnichord to Lahore harmonium to acoustic guitar.  After the lively "Monkey on My Rooftop," a chronicle of the endless battle of his aunt with a monkey, Sidd disclosed, "And then there was that time I was 8 and I found my mother's green card," diving right into the bouncy "Resident Alien."  It was simultaneously funny and poignant, and I realized that if you like the interesting world instrumentation of Vampire Weekend, but find them lacking in the human element, Goldspot is a better alternative. 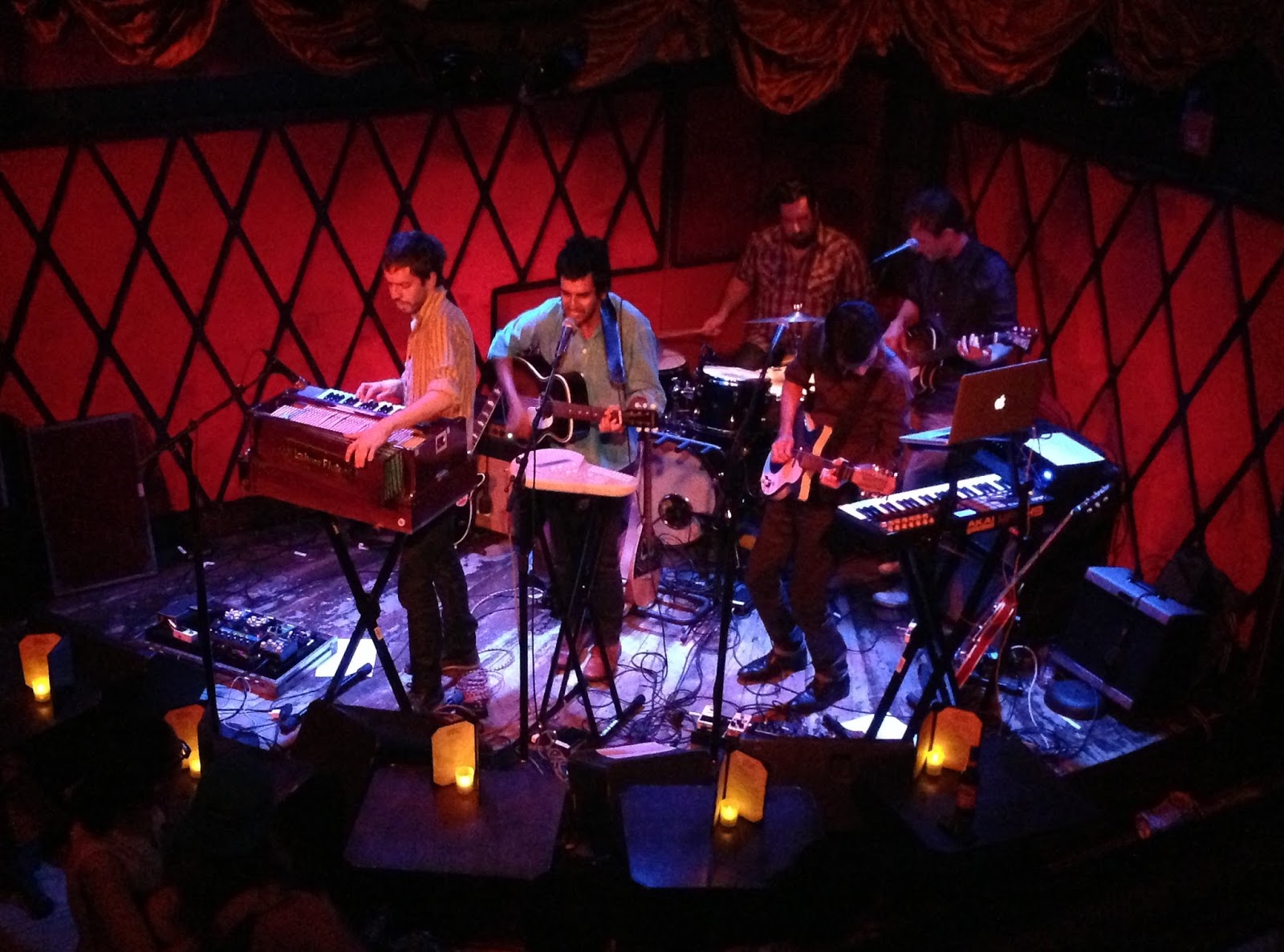 After a few more songs, including older tunes "Call Center Girl" and "Friday," Khosla announced, "We've got one more." "Five more!" yelled a crowdmember.  While I also wouldn't have objected to five more, Sidd chose his favorite song on the album, "Evergreen Cassette."  He explained that when he was two, his parents were unable to find an affordable babysitter and had to send him back to India.  With no Skype technology, and phone calls to India costing $24/minute, his mother would record greetings and lullabies on a cassette tape and mail it to him.  He'd then record whatever a 2-year-old would say onto the tape and post it back.  They continued the process for two more years, until his parents had saved enough money for him to rejoin them.  Try finding something that touching on a Vampire Weekend record.