"If I'm gonna spend two days in one town, it might as well be New York fucking City."  So said Frank Turner last night at his second consecutive show at Music Hall of Williamsburg.  A near-flawless setlist competed for dominance with flawed sound, and thankfully won out by the concert's conclusion. 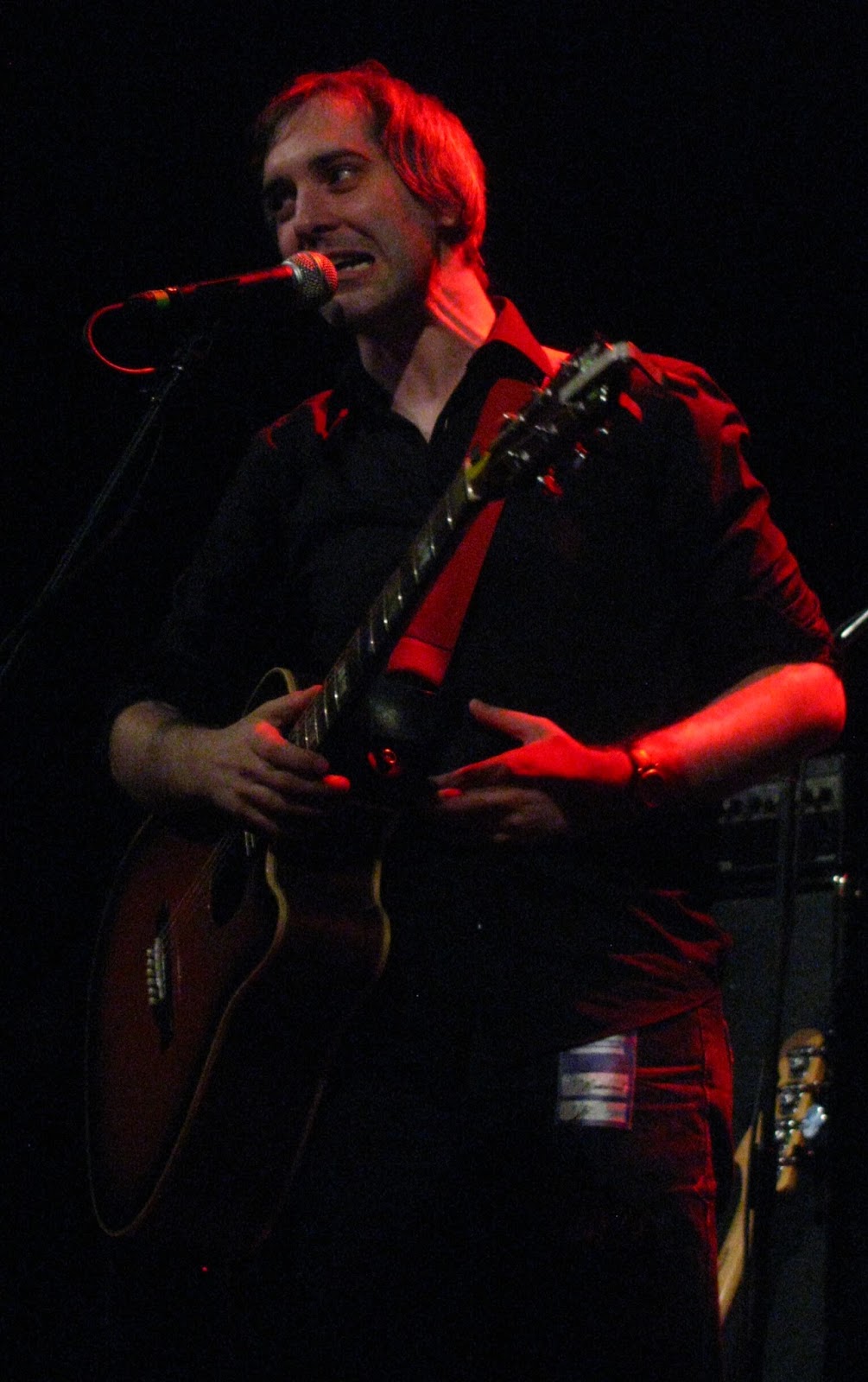 Greeted by cheers as soon as he emerged from the stage-left door, lanky singer-songwriter Ben Marwood should have been having the time of his life, seven days into his first U.S. tour.  "In the interest of honesty, I feel like death," he admitted, relaying a story about his stage fright-induced stomach problems.  Much like early Frank Turner shows, Marwood performed a set of modern folk songs accompanied solely by his acoustic guitar.  His voice sounded a bit like Christian Bale's (his native voice; not Batman's), and his banter betwixt songs (and even during them) gave his performance a relaxed, friendly vibe.  During "Oh My Days," he interrupted a line about gigging in Newbury to explain, "Which is a town near my town, so you think people would go."  He dedicated "I Promise You That It Will Be Okay" to Frank Turner, despite the fact that "he still spurns my sexual advances."  Before closing with "Murder She Wrote," Marwood invited everyone to meet him afterwards at the merch table: "We will hug. We will high-five. We will talk about the queen. That's all I know how to do."

Minneapolis punk band, Off with Their Heads, took the stage next.  A fight had broken out during their set on Tuesday, so the crowd seemed overly cautious not to rock the boat.  That's not to say there wasn't energy onstage, with the band blazing through 16 songs in under 39 minutes.  Even though his voice had quite the growl, frontman Ryan Young enunciated his words with so much precision that I was able to grasp the majority of the lyrics, an anomaly in punk rock.  Young opted to tune his guitar through the amp at the end of songs, allowing the band to keep plowing forward.  Almost all of the power chord-based two-minute tunes were melodically enhanced by backup vocals from guitarist John Polydoros and bassist Robbie Swartwood.  And drummer Ryan Fisher had a colossal beard. 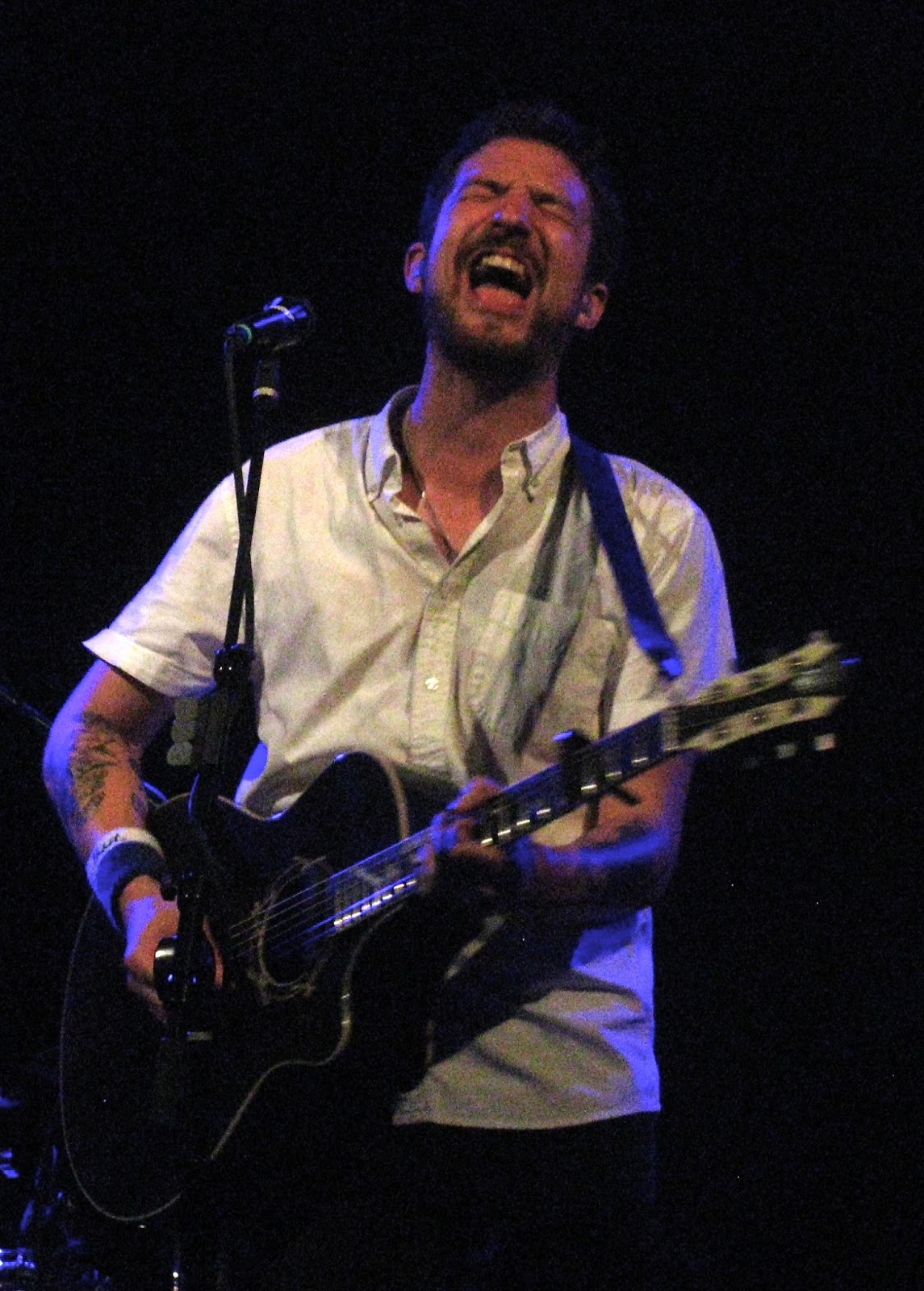 "Good evening, Brooklyn!  How you fucking doing?" a grinning Frank Turner questioned the roaring crowd that only only got louder when he began singing "Eulogy."  At the song's end, the Sleeping Souls kicked into "Try This at Home," but the mix sounded like shit.  Nigel Powell's crisp drums overpowered everything except Tarrant Anderson's rumbling bass.  Ben Lloyd was clearly rocking out on his guitar, but he might as well have been unplugged to save the electricity, considering you couldn't make out a note.  At least his vocal mic was up, so you could hear him supplying the high harmonies to the finale of "Reasons Not to Be an Idiot."  The song led directly into "Glory Hallelujah," and while Frank spent much of the song repeating, "There is no God," I had no choice but to believe in a higher power when the guy who'd been singing horribly right behind me moved up closer to the stage.  I've found my enjoyment at Frank Turner shows is often based on how bad a singer I'm in front of.  "If today had been a film, it would've been The Hangover pt. II.  So a hangover, but not even very funny," jested Frank.  The Souls left the stage, with the exception of Matt Nasir, who backed Frank on keys for "The Way I Tend to Be."  Prior to the show, several fans had emailed requests that Frank perform "Redemption," a song rarely played due to its taxing vocal demands.  Turner dismissed Nasir to tackle the tune, acing the vox and pouring in so much emotion that it was without a doubt, my favorite performance of the night.  He continued solo on "Love, Ire, & Song," though solo is a misnomer, insomuch as the entire crowd was singing along.  Looking up at the swaying fans in the balconies when it came to the line, "If we're stuck on this ship and it's sinking, then we might as well have a parade," I imagined I was in a ship's belly, singing a shanty with the rest of the crew.  The sound had improved considerably during these songs without the overloud drums.  The mixer must've finally noticed the difference because once the band returned, he dialed back Nigel's drums a little and even raised Ben's level a tad, so it was pretty much a revelation when I finally heard him cut through on "The Road."  And even better to catch the otherworldly electric hum of him playing with an e-bow on "I Am Disappeared."

"Four Simple Words" picked up right where "Disappeared" left off.  By the end of the first verse, the tension had reached its breaking point, and with Nigel's furious drumroll, a circle pit broke out in the room's center.  While I'm generally anti-moshing, the sense of relief that came with it was worth the getting bumped a little.  "You guys are pretty fucking cool," Frank addressed the crowd once it was over.  But would we be able to combine singing, clapping, and jumping up and down into jumping jacks while singing the chorus of "Recovery?"  It sounded like a recipe for disaster, yet it actually turned out to be really fucking fun and a helluva calf workout.  After such a peppy number, Turner chose "Broken Piano" for a cool-down.  While improved from the studio version, it was somewhat anticlimactic to end the set with Frank crooning out-of-tune like the piano in the song. 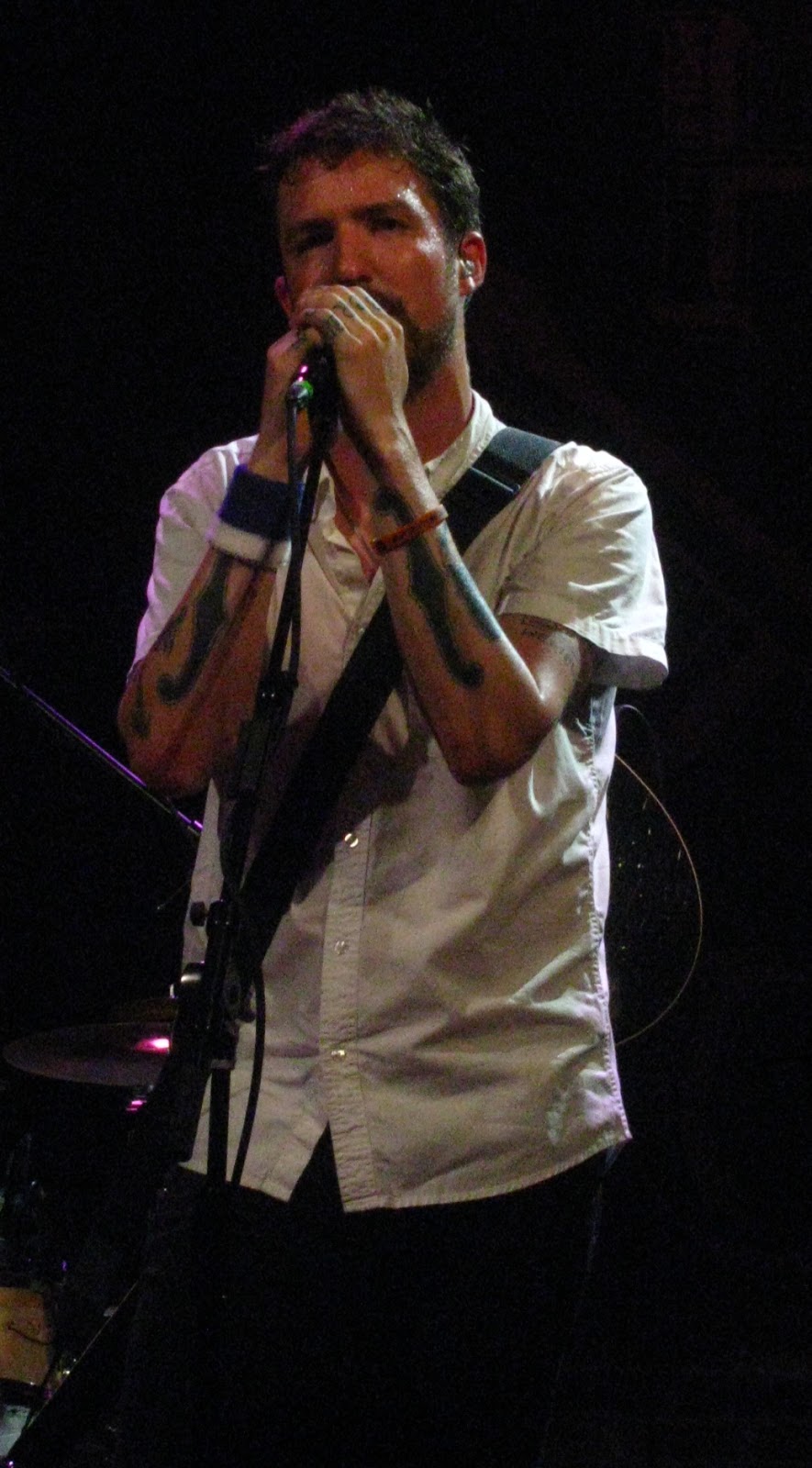 Frank and Matt came back shortly thereafter, Matt picking up an electric mandolin to assist Frank on the debut performance of "We Could Get Better."  He asked that everyone put their camera phones away for this work-in-progress version.  Turner was visibly affected by the song's trial, lyrically an extension of the post-breakup subject matter of Tape Deck Heart.  The rest of the Sleeping Souls joined in on "I Still Believe," Tarrant Anderson dancing around with his bass like only he can.  Halfway through "Photosynthesis," the band vamped while Frank began his closing remarks.  Some fans preemptively got down on their haunches, forcing Frank to acknowledge the routine we'd participated in at Bowery Ballroom.  "The rule is everybody sit down on the floor; I'll explain the rest later," he offered.  Calves still sore from the jumping jacks, we crouched down to hear his spiel on concerts being unifying experiences, and exploded upward at the same moment to prove his theory.  With the sound issues at the concert's start, it wasn't exactly "the perfect way for the evening to begin," but it was damn sure a great way to end it.

SET -
Eulogy / Try This at Home / If Ever I Stray / Plain Sailing Weather > Reasons Not to Be an Idiot > Glory Hallelujah / Wessex Boy / Substitute / The Way I Tend to Be / Redemption / Love, Ire, & Song / We Shall Not Overcome > The Road / Polaroid Picture > I Am Disappeared > Four Simple Words / Recovery > Broken Piano

ENCORE -
We Could Get Better* / I Still Believe / Photosynthesis
at 2:05 AM