Frank Turner & the Sleeping Souls rocked the Bowery Ballroom last night.  Though the set  drew mainly from his standard repertoire, everything was played with fervor, including a few new songs from the upcoming Tape Deck Heart. 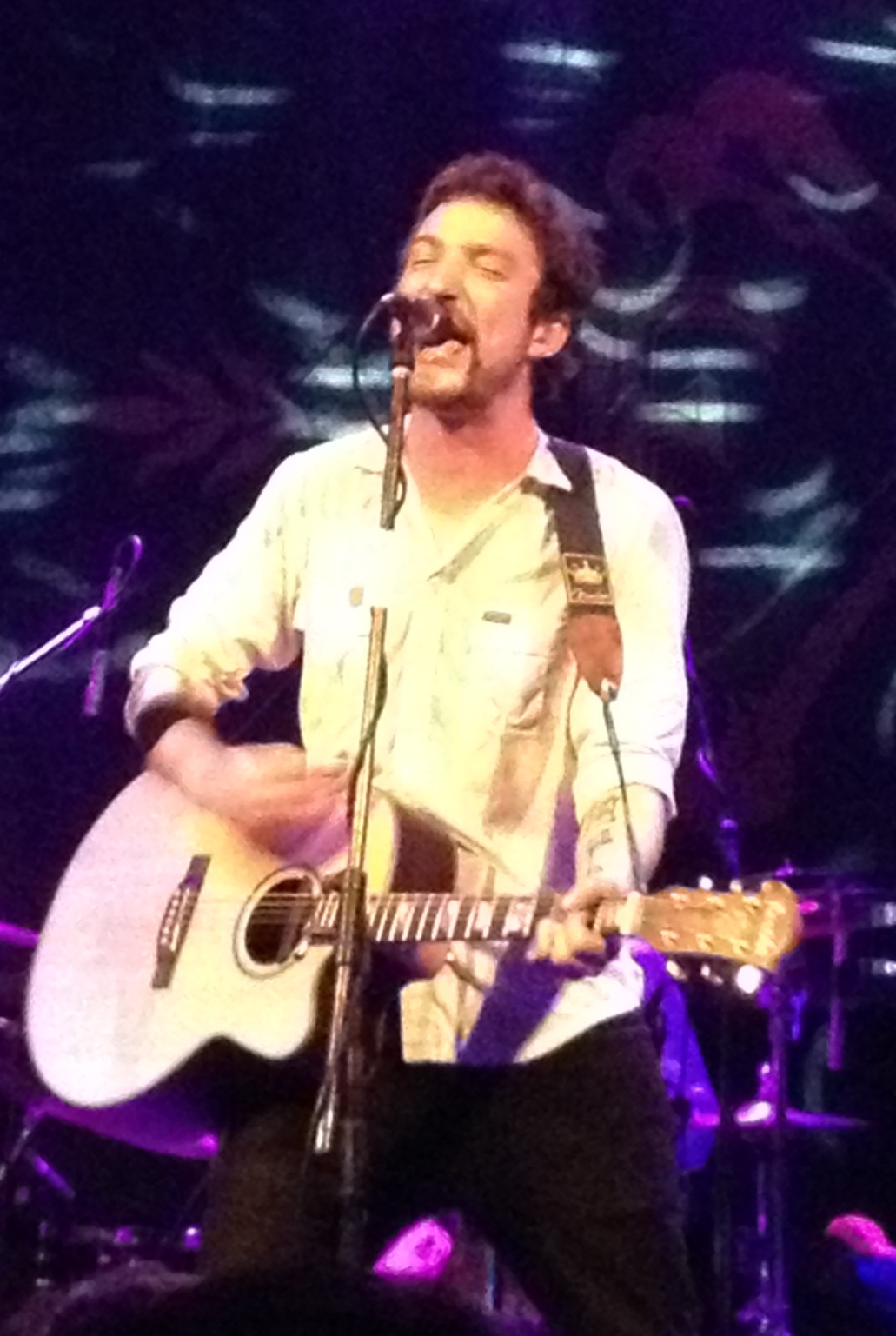 "I Am Disappeared" was, in my opinion, the perfect choice for an opener.  As the song kept building tension toward its inevitable release, I was bracing myself in case the floor was to erupt into a moshpit as it had at Webster Hall.  The pushing wouldn't start until the next number, "The Road," with a grip of big dudes rushing toward the stage to make sure Frank saw it was their fat fingers in the air punctuating each direction of the compass rose.  Following the breakdown, just prior to the "So saddle up your horses" line, Frank let out a yell that exemplified why I spent the extra money on a second-market ticket mere hours before the show (after the box office and Ticketbastard had failed me months ago).  It wasn't the loudest or fiercest scream, but it was the purest.  If anyone has a recording of the show, you must listen for this beautiful nugget (and please share it with me).

A pit developed as the song flowed into "Peggy Sang the Blues" (Because nothing gets you as violent as a song about playing cards with your grandmother.), but thankfully it dissipated by the ditty's end.  Frank made the token announcements about the new album coming out, and asked if we'd be okay with hearing some of the tracks.  He quickly appended, "All the hits too. 'You Give Love a Bad Name' and all that shit."  To a naysayer in the crowd: "Who booed that?  That's a fucking great song."  Having debuted as the first radio single earlier in the day, "Recovery" was the obvious choice.  The song saw Frank racing through breathless verses to a chorus that just aches for horns.  Hopefully by the fall, Frank will have chosen a brass band to bring along as his opening act, and really set this one ablaze.

To introduce the second performance ever of "Losing Days," Frank relayed a quick story about how he realized he was getting older after dropping something on the floor, reaching to pick it up, and making a noise.  Matt Nasir picked up a mandolin (No word on if he made a noise.) to play the melody reminiscent of the Cure's "Just Like Heaven" while Frank admitted through song that he occasionally gets tattoos because he's bored.  Frank used the "ba ba ba" singalong of "Wessex Boy" to unite us as people who left our differences at the door and came together to have a good time.  "It also makes me feel good about myself," he added.  "I can't believe I just said that," he laughed bashfully.  For "The Real Damage," the Sleeping Souls departed, except for Nasir, who accompanied on keys.  Matt then left Frank alone to unveil "Good & Gone."  "This song's about how I hate Hollywood and I hate Motley Crüe," Frank prefaced.  He then played his rendition of Leonard Cohen's "Chelsea Hotel #2," which was a little tainted by the some fuck in the middle who sang the wrong words.  The Sleeping Souls rejoined FT for "Prufrock," which led into "One Foot Before the Other," continuing its distinction as the most out-of-place album cut that just ignites when performed live.  During "Long Live the Queen," Nigel Powell emerged from behind his drumkit to lead the crowd in clapping out the song's final chorus.

When it came time for "Four Simple Words," Frank revealed that Switzerland, much to his surprise, won the top prize in the European dance competition.  "You can't argue the fact, Turner," jested guitarist Ben Lloyd.  Perhaps he'd forgotten that Webster Hall's second night patrons had been crowned Dance Champions of the United States of America, or more likely, he was knowingly goading us when he claimed Boston now had the title.  "Do it with passion.  Do it with gusto.  And do it better than Boston," he prodded.  This came as an engraved invitation to mosh, and fortunately, the fans that did, did not do it near me.  (However, those of you busy slamming into each other may not have noticed the the sublimely crunchtastic notes coming out of the low-end of Matt's keyboard.)  The silver lining to the moshpit was that it relocated a group of moms to my section of the floor, and I got to watch them mom-dance as they sang along to every lyric.  Hilarious and very touching. 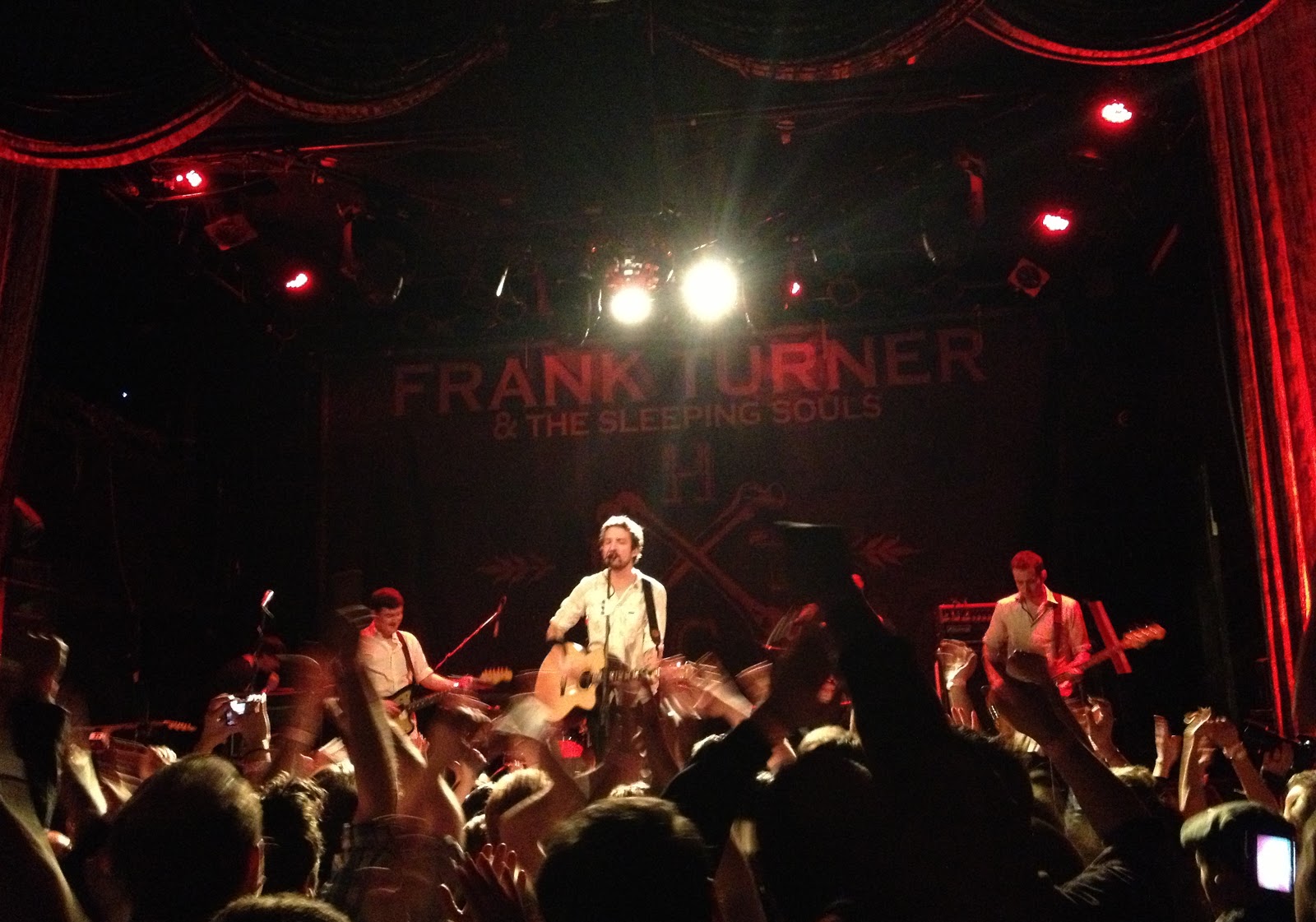 For the encore, Frank came out solo to perform "If Ever I Stray," with the band kicking in after the first chorus.  FT had everyone in the crowd sit on the ballroom's beer-drenched wooden floor for "Photosynthesis" until he had us jump up at the exact time to give literal meaning to the "I won't sit down, and I won't shut up" refrain.  A fan crowdsurfed to the stage, and put his arm around Frank.  He then grabbed the microphone to sing, but was amazed to find no one singing with him.  "You're okay, you've just mistimed it," informed Frank.  "You wanna stagedive now?" he offered.  Taking his cue, the fan jumped in, Frank professing, "Time is everything, my friend."  "Dan's Song," sans "invisi-monica" section, closed out the night with a blast of punk energy, Tarrant Anderson playing his bass so aggressively that he busted a string, which he threw out to the crowd.  Ben Lloyd also tossed his guitar pick, which I salvaged from the floor at the show's end.  Though I would've loved to have heard some more rarities, I can't really complain about what happens onstage at a Frank Turner show.  The man's got "it."