The Postelles Come Alive for Encore at Santos Party House

The Manhattan-based Postelles returned home to Santos Party House Tuesday night for their first NYC headline gig since they played Cameo Gallery in September.  Muddy mixing may have marred most of the set, but they were able to salvage the show with a rowdy encore.

I should've known something was off when I arrived at the venue and instead of putting the 21+ bracelet around my wrist, the bouncer just ground it into my arm hair.  When I got inside, things resembled a high school dance, green and purple lights reflecting off the massive disco ball and illuminating a few teens in the center, but with the majority hugging the walls.  I guess it had been awhile since I'd been to a concert where an X on your hand meant you couldn't drink. 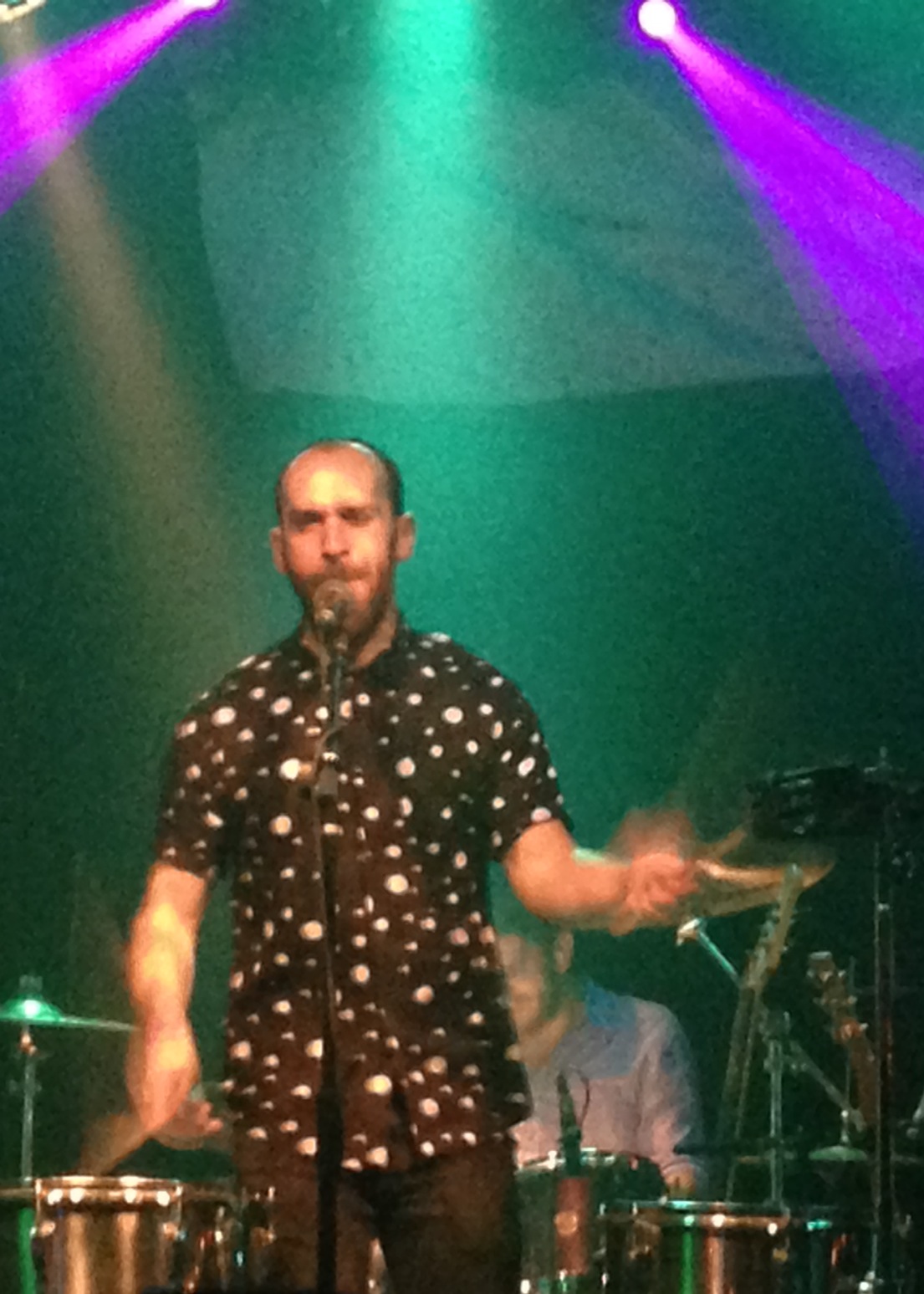 Brooklyn's Ambassadors opened the show with a set comprised mainly of new songs.  I breathed a sigh of relief when I saw the hairline of singer Sam Harris, and no longer felt like the oldest person in the club.  He reminded me of Christopher Meloni in Wet Hot American Summer.  When he sang in his mid-range, his voice was like any other adult contemporary rock singer (Chris Martin of Coldpay or Isaac Slade of the Fray), but when his vocal riffing at the end of "Habits" hinted at a bright upper register, he reminded me of Penguin Prison's Chris Glover.  When Harris went up to the mic to sing the next song, nothing came out, so he signalled Noah Feldshuh to fill the gap with a slide guitar solo.  The issue was resolved shortly after, and that sweet falsetto was heard once again.  At the song's end, Harris remarked, "We were so sexy, we blew the fuckin' power, dude!"  Maybe that wasn't entirely true, but they were an interesting opening band, and I'd see them again.

Unlike Arkells.  I'd downloaded their debut, Jackson Square, in 2009 and listened to it once.  I remembered liking it, but I didn't remember anything about it.  I guess my memory failed me.  They hail from Hamilton, Ontario, and if you didn't already know that, just listen to one of their songs 'cause they'll mention it like five times.  Their lyrics, which are sung over Springsteen-esque progressions, reflect a band with no real life experience.  "The Ballad of Hugo Chavez" is hardly a ballad.  Liberally interspersed with "hey hey hey"'s, its words don't focus on any of Chavez's actual political beliefs; just that he's cramped in his jail cell.  I seriously doubt they even knew that he died the same day as the concert.  "Kiss Cam" was about...you guessed it!  Kissing on the Jumbotron at a baseball game.  They polled the audience to determine if we'd want to hear a cover of a Talking Heads song or the Clash.  The Clash won out, and they played "Rock the Casbah."  Part of me wonders what Talking Heads song they would've played, but most of me doesn't care.

A little later, the Postelles emerged from backstage, with Daniel Balk wearing a Fleetwood Mac t-shirt.  They yanked down a white sheet with their logo printed on it as their backdrop, and kicked into the single that had premiered hours earlier on iTunes, "Caught by Surprise."  "It's good to be back home.  I got arrested at the border of Canada this week," Daniel announced, choosing to refrain from any details.  Perhaps he was a little too relieved to be in NYC because the energy level wasn't exactly up to the standard that I've come to expect from Postelles shows.

The Postelles are one of the few bands that accomplish the rare feat of simultaneously sounding polished and raw.  They use very little in the way of effects, and tuning-wise, they pretty much just plug in and play.  What makes them shine are their songs, perfect bites of pop/rock goodness, every one of them a potential radio hit if they wanted to over-produce them.  But they don't because it's about the songs.  Today's pop-punk bands could take a lesson from the Postelles, who play pop music, but have that authentic punk mentality.  Unfortunately, the sound mix in the room muddled the punchiness of the bass and submerged those sonic imperfections (if that makes sense).  Not to mention the fact that I almost got into a fight with two older guys in front me who claimed they weren't moving, but kept leaning on me.  Go figure that at a show like this, the kids wouldn't be the most annoying.  Then again, they couldn't drink alcohol. 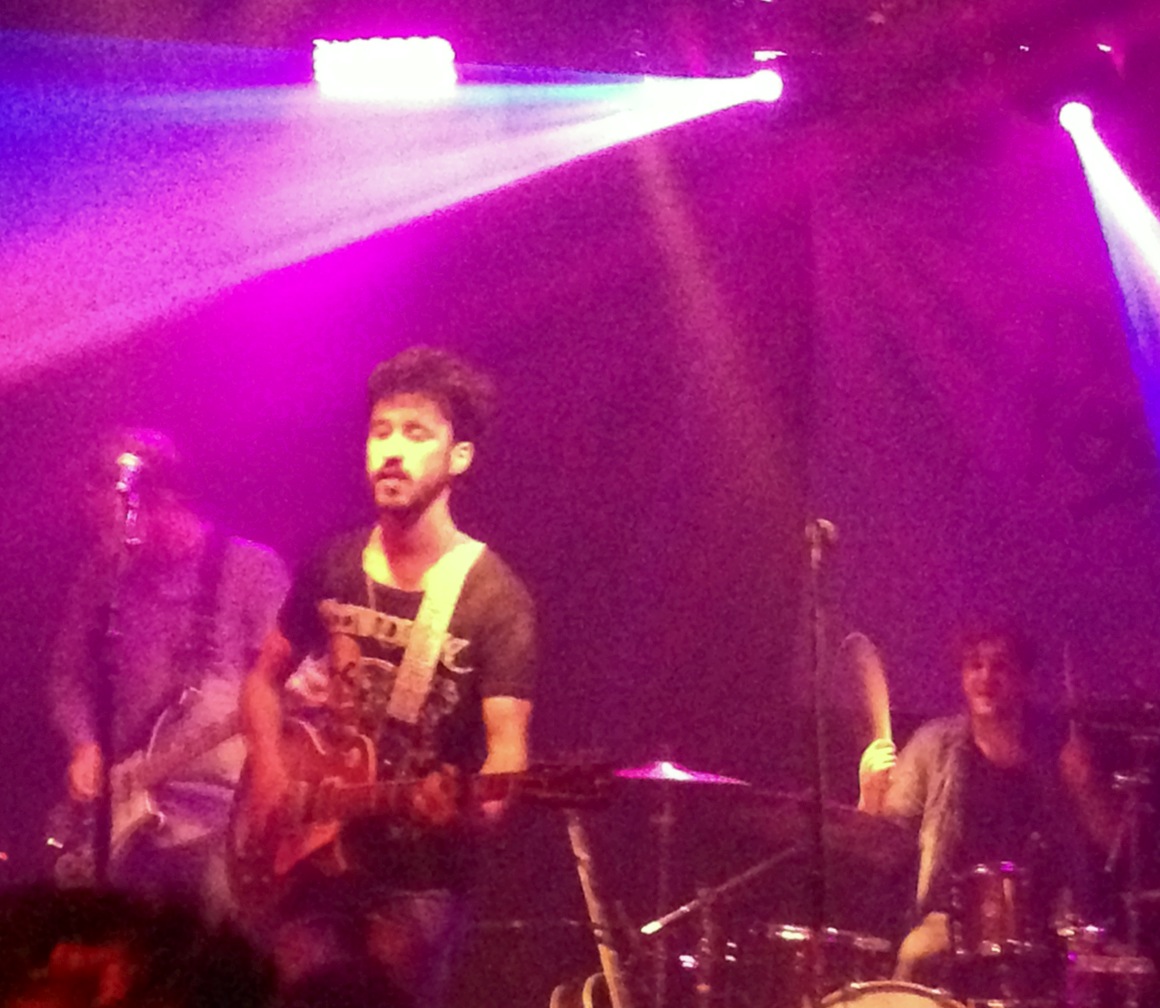 Alex Winston joined the band for "Pretend It's Love," and she must've reinvigorated them because the rest of the show was excellent.  A cover of Wreckless Eric's "Whole Wide World," one of my favorites "Can't Stand Still," and closer "Tidal Wave" were all first-class.  Their set was only thirty seconds longer than Ambassadors', but they returned for a top-notch encore, beginning with a "Boy's Best Friend" that even ventured briefly into reggae land.  While Arkells had merely teased the opening chant to "Blitzkrieg Bop," Balk upped the ante on Ramones' covers, inviting onstage anyone who knew the words to "Beat on the Brat."  The kids had the time of their lives jumping around and taking their turns at the mic.  The vivacity spread into the crowd, and when it came time for "White Night," the entire floor erupted into a dance party.  I'm just bummed they ended it there when it felt like they were just getting started.

*Any help identifying these songs is appreciated.
at 1:13 AM