Both Brians of Beat Radio Back in Brooklyn

I walked into Muchmore's about five minutes before 9 to find a tiny bar that only had Abita on tap (What?).  I quickly discovered there was much more to Muchmore's (Well, not exactly.) when I looked through a doorway to my right to see a stage in a room about the size of a studio apartment.  Couches lined the muraled walls, decorated with grotesque characters like this angel. 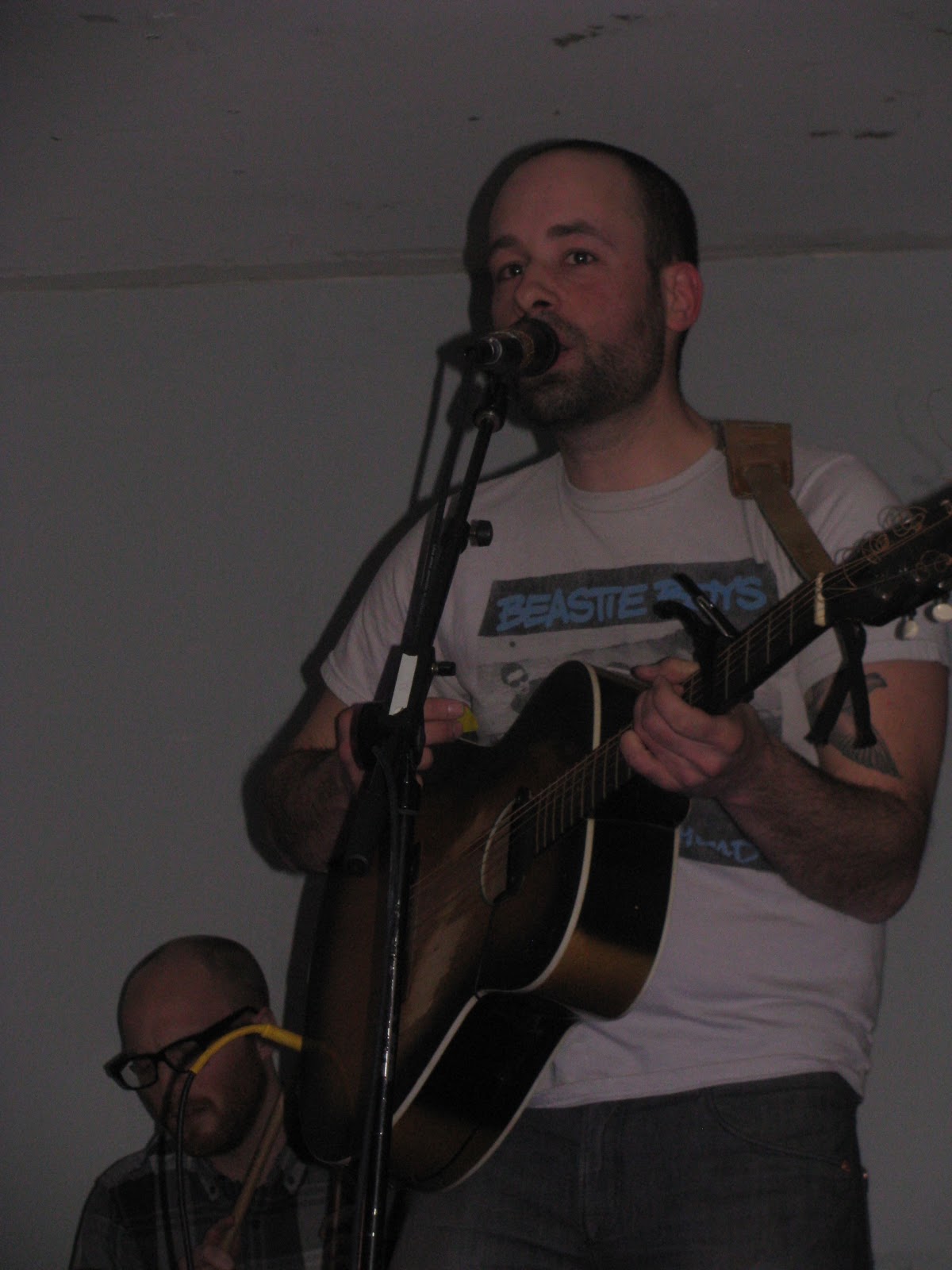 Why was I in this unfamiliar place?  Beat Radio were making their return to Williamsburg after last month's gig at Pete's Candy Store.  And this time, Brian Sendrowitz would be accompanied by his sole bandmate, Brian Ver Straten, on drums.  The duo opened with "Elegy," and transported the room into a what resembled a mid-'90s grungy house party.  While Sendrowitz himself has described his music as "bedroom pop," Beat Radio's latest effort, Hard Times, Go!, was recorded in his basement, and it sounds like it.  Just listen to the screeches of guitar on "Hurricanes, XO" or Ver Straten's cymbal crashes on "Never Let You Down."  You can't make that kind of noise in your bedroom.  Bringing that basement-sized sound into the demented living room-vibe of Muchmore's paid off in a big way.  Every song sounded fuller than it did at Pete's or on the record.  The distortion in "East Coast" could've curdled milk, and it contrasted wonderfully against Brian's tender singing.  When he hit a wrong chord in "Stars Collided in Our Hearts," Sendrowitz apologized, "Sorry," with a bashful smile.  He was immediately excused because it was so genuine, it was like he was among friends.  Even his pitch for merchandise was affable, if silly: "We're like Kiss.  We have action figures, beer koozies, Hot Pockets.  Some of those are true."  And while Hard Times songs made up the bulk of the set, it was a nice surprise to hear older tune, "Everything is Temporary."

Because the show started a half-hour late, I wasn't able to run over to Brooklyn Bowl to watch Everything Everything as I'd planned, so I stuck around for the next two bands on the bill.  The Pine Hollows came next, playing most of their new album, Something My Heart Understands.  Led by Gianni Napolitano, who looks and sounds like he could've been a member of the Beatles circa 1963, the Pine Hollows make music in the mold of those early Beatles singles.  Perhaps too tightly in the mold.  There are worse bands to emulate, for sure, but the strongest moments came in a three-song sequence towards the end of the set that rocked harder than the rest, ending with the creepy cadence of "After Dark."  Hopefully they will continue to expand their sound, and not just in the way the Beatles did.

The final band of the evening was Hey Anna, an indie pop outfit consisting of the three Rauch-Sasseen sisters and two of their friends.  The band incorporated several trendy styles into each song to create music that is both catchy and substantial.  While the sisters often swapped lead vocal duties, I preferred the configuration with Erin at the helm, as it seems the band does, just based on the number of songs she fronted.  Things got moody and literal when guitarist Andrew Smolin requested, "Can we turn all of the lights off?" for "Blackout," and new song "Dancin' 'Til 3" recalled a female version of Vampire Weekend.  I'm gonna keep them on my radar, as should you.  Download their EP for free here.

Elegy / Golden Age / East Coast / Hard Times, Go! / Stars Collided in Our Hearts / Teenage Anthem for the Drunken Boat / Everything is Temporary / Days Like Diamonds / Hurricanes, XO
at 2:10 AM