Those who saw Shuggie Otis hammer out a dazzling solo at Metrotech Commons on Thursday would have been surprised to see him at Rumsey Playfield yesterday... hammered.  To think that some people at Summerstage who hadn't yet seen him now believe that he's some washed-up alcoholic is sad, considering the brilliance displayed just three days before. 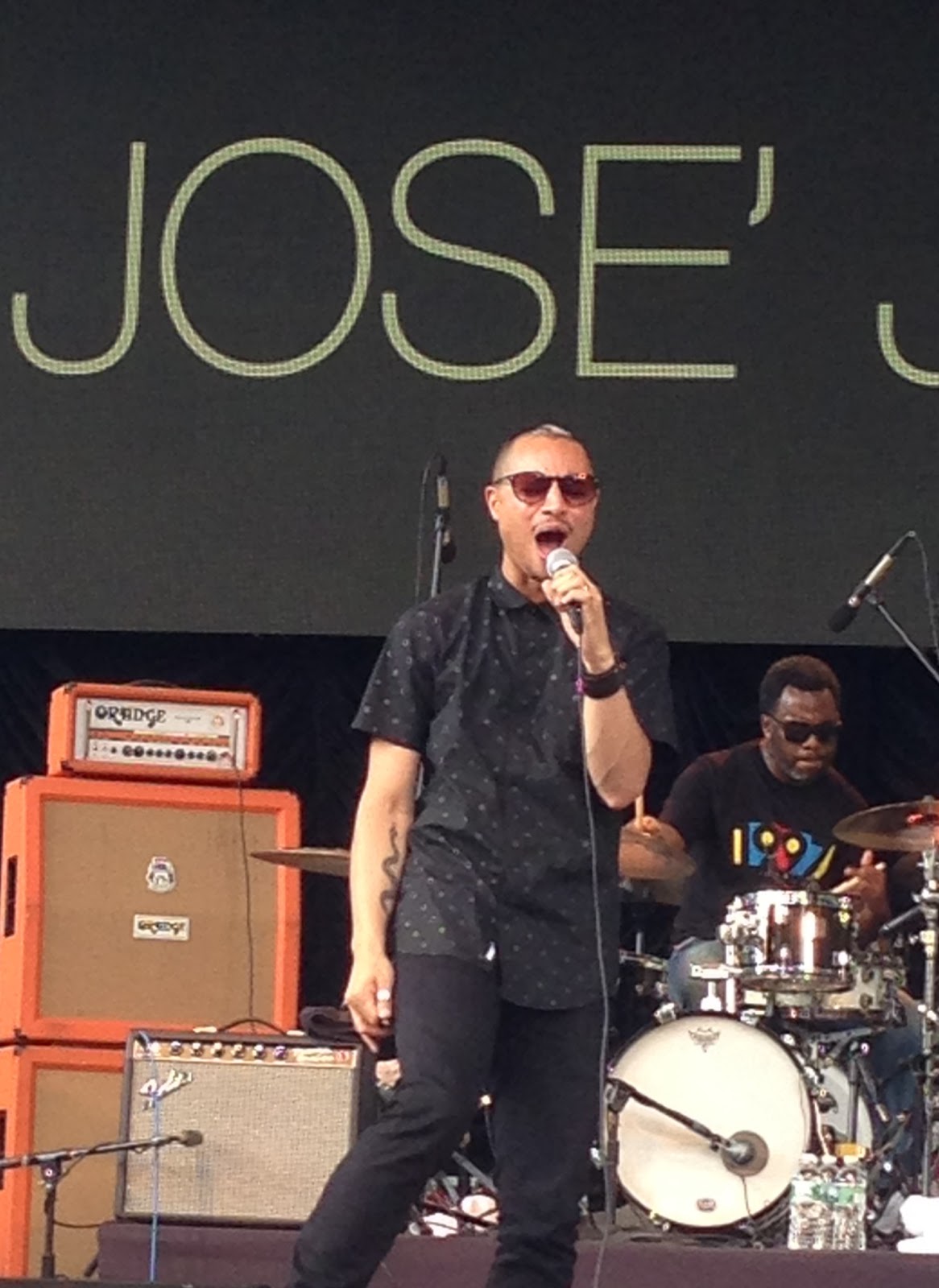 Before I ramble too much (like Shuggie did), let me commend opener, José James.  There's a small, white patch of hair in the center of James' scalp, likely a birthmark of some sort, as he's only 35.  It serves as an emblem of the old soul living inside him, the one with the classy, baritone voice.  His music exists somewhere near the crossroads of jazz and R&B, just around the corner from the Roots.  In fact, listening to Nate Smith's breakbeats combined with Kris Bowers' Fender Rhodes, it was easy to imagine Black Thought stepping in and dropping a conscious verse or two.  After crooning the sultry "It's All Over Your Body," James grabbed an acoustic guitar for "Sword & Gun."  Takuya Kuroda sparked up a jazzy trumpet solo that cued some crowd members to spark up their bud.  James questioned an audience member in the front about his t-shirt that read, "New Designer Drugs."  "It's for you!" offered the guy.  "I'm from the D.A.R.E. generation.  Me and McGruff the Crime Dog, we go way back," quipped James with a chuckle.  The set progressed as No Beginning No End does, with "Trouble" and "Vanguard," before taking a detour with a Bill Withers medley as the sun broke through the canopy of clouds.  After a round of "Ain't No Sunshine," Bowers took the reigns on a Rhodes solo, sneaking in a taste of "Use Me" before tossing it back to James for "Grandma's Hands" and the "No Sunshine" bookend.  The sun disappeared again, James remarking, "How's the sun gonna come out only for that song?"  Bassist Solomon Dorsey supplied some excellent vocal harmonies on "Come to My Door," probably my favorite of the songs.  They followed it with a brand new one, "Anywhere You Go."  Joined by some hipster on electric guitar, James showed off yet another side on the pop/rock song, though the guitar-playing was entirely too pedestrian to add anything to his lavish voice.  "This is that beautiful Sunday late-afternoon song going out to Ray Charles and Aretha Franklin," he said before closer, "Do You Feel."  Not three lines into the song, he called out to the bleachers, "I see you makin' babies back there."  Each musician took a relaxed solo during the slow jam, coming together at the end for a collective bow.

I usually start recording set times when the first note is played.  You can add another 6 or 7 minutes onto Otis' set for the time he spent talking when he took the stage.  Smacking on gum and slurring his words a little, Shuggie cheerily introduced each member of the band.  "We came here for a reason, and I'm gonna run my mouth for about another 30 minutes," he said with a laugh.  Disapproving looks from every bandmate aside from saxophonist Albert Wing, who doesn't look like he'd be able to frown.  When Larry Douglas attempted to get Otis' attention, Shuggie interjected, "I forgot to tell two members of my band to shut the fuck up when I'm talking."  A helicopter hovered overhead for a second, and Otis turned his focus to the sky: "I'll be through in a minute. Get lost!"  Introducing his guitar tech by the wrong name, "Paul Young," Otis then corrected himself, "Paul Lamb. Well, he's young."  Drink a little before the gig, Shuggie? 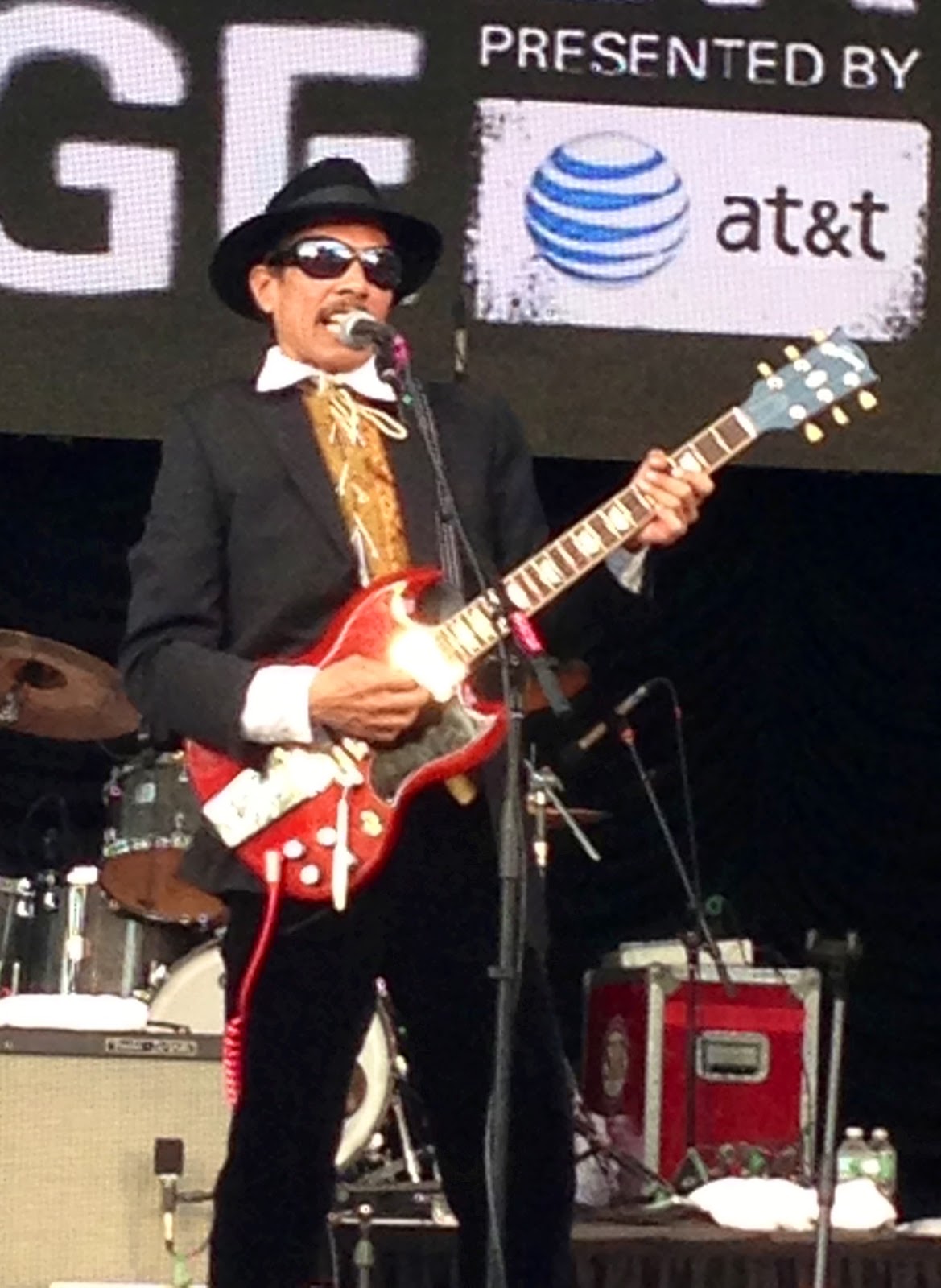 Eventually, they finally kicked into "Inspiration Information."  Immediately after it ended, Shuggie was at it again.  "I wrote 'Strawberry Letter 23' for someone to cover it. And they did, six years later," he said.  "I still like my version the best," he taunted in a silly voice.  Before Shuggie could go any further, Nick clacked his sticks together to start "Tryin' to Get Close to You."  After "Aht Uh Mi Hed," you could tell by his face that Swang was getting restless.  "I got about 20 more minutes of a dialogue," claimed Shuggie.  "Do you want me to have fun, or do you want me to leave the stage? I'll leave the stage in a hot second," he threatened, though it wasn't clear if he was directing it to his bandmates or the dissipating crowd.  The lowpoint of the set came next.  I'm only identifying it as "Island Letter" based off its position in the setlist, but it bore little resemblance to the undulant guitar tune I heard on Thursday.  After mumbling his way through the song, he tried to find the guitar part, and only managed a bit of the cascading solo found at the end of "Strawberry Letter 23."  "This next song is called 'Me & My Woman.' Woman, shut up!" he yelled.  No idea who he was talking to, but he was tickled.  When it came time for "Miss Pretty," I don't know why, but I still had hope for some Metrotech magic.  Alas, his left hand spent most of its time where the neck meets the body, typical guitar solo stuff, not the staggering genius from three days prior.  At least the funky number gave Swang a chance to work out some frustration on his Electro 3.  As the show went on, Shuggie sang further and further away from his microphone, more likely obliviousness than self-censorship.  Introducing "Strawberry Letter 23," Shuggie marveled, "What a name for a song. But it makes sense. I finally found out what it means, but I ain't gonna tell you."  Thankfully, by this point, he was starting to sober up a little, but there was only one song left, "Ice Cold Daydream."  Even Larry Douglas' rabble-rousing shouts of "Ladies and gentlemen, Shuggie Otis!" seemed less enthusiastic, leaving James Manning to clean up the mess with an awe-inspiring bass solo.  See Shuggie as early in the day as you can, I guess.