An Acoustic Evening with Ben Harper at Carnegie Hall 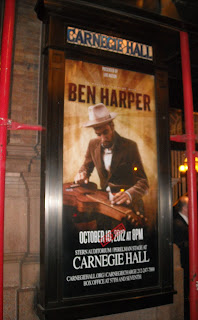 Wednesday night, Carnegie Hall hosted an acoustic evening with Ben Harper, the final stop on the 42-year-old musician's first solo acoustic headline tour.  I arrived at the legendary venue with enough time to peruse their museum (Did you know Carnegie Hall narrowly escaped demolition in 1960?) and a gallery of handwritten sheet music by composers (Terry Riley's crayon-accented, undulating staffs were my favorite.)  I ascended the stairs to find my seat on the left side of the dress circle in the Stern Auditorium, and gazed downwards.  The Perelman Stage was set with 13 guitars, an upright piano, and a vibraphone on top of a large rug.  A chair draped with a blanket sat in the center.  It appeared like the living room of a rockstar or a posh instrument store.

The playbill foretold of an opening act, singer-songwriter Grace Woodroofe.  Ben produced her debut album, the program reading, "In the words of Ben, 'You are not going to believe this girl.'"  He should have said, "You are not going to see this girl," because she never came out.  It was never explained why.  Who misses their gig at Carnegie Hall?

At 8:24, Ben walked across the wooden stage, chose his famed Weissenborn guitar, and took a seat.  He opened with an instrumental mélange of "All My Heart Can Take" and "Mutt," crescendoing to a series of palm hits on the body, which resonated off the walls nicely, before segueing into the first song Ben ever wrote, "Pleasure & Pain."  He selected a ukulele for "Blessed to Be a Witness," inserting the lyric, "I am blessed to be with you at Carnegie Hall," which elicited claps from the floor and balconies.  After "Witness," Harper traded out the uke for his '54 Stratocaster (So much for an acoustic evening I guess.), taking a moment to give a lesson on the Weissenborn, which is hollow through the neck, fretless, requires a tool to be played, and although it's more closely related to the cello, is considered a lap steel.  Ben relayed a text from a friend: "'I've never known anyone that's played Carnegie Hall before.  How do you get to Carnegie Hall?'  Before the text even got dry, I shot back, 'Lap steel.'"  Not two notes into "Excuse Me Mr." Ben stopped and gushed authentically, "Thank you all for being here very much."  It was during this song that I discovered the beauty of the room's acoustics.  Ben would occasionally reel back his head away from the microphone and sing to the room (A suspended mic dangling above the stage amplified some of this sound.), and it just sounded so incredibly rich and soulful, that I wish he had done the entire show off-mic.

The only problem with doing that would be controlling the volume of the crowd.  When people started clapping along to a song, it was covering the performance, so Ben changed the tempo, and hands dropped to laps.  "I'm always fascinated by time," Ben laughed.  Even whispers could be heard in the space, let alone the shouts of "WOO!" and "HARPER!" coming from the couple directly behind me. You're not at fucking Bonnaroo.  You're at Carnegie Hall.  Have some class.

Photography of any kind was not allowed during the show (That explains the lack of pics.), but pockmarks of luminance from cell phones were visible on the floor below.  Ushers would generally stop photographers by shining a flashlight on them.  When someone was daring enough to use a flash, Ben heard a commotion from somewhere in the crowd and remarked, "It's the flash picture police.  You're gonna go to the flash picture jail.  It's ugly.  There's flashes everywhere."  I can understand wanting to snap one photo, but there were some who just couldn't bring themselves to pocket their phones.  I wished it were 1891, when the hall opened, because it would've been purer.  The hum that accompanied the electric guitar also wouldn't have existed.

Segueing from "Diamonds on the Inside," Ben played new song "Masterpiece," which is a sweet love song with the chorus "Loving you is my masterpiece."  It was inspiring to watch Ben decide which guitar to grab for each song, so many instruments from which to choose.  He played piano for "Younger Than Today," and then traversed the stage to the vibes for a covers medley of Marvin Gaye's "Trouble Man" and Pearl Jam's "Indifference."  Ben shared his three career highlights: getting to sing with Eddie Vedder, seeing Solomon Burke perform an arm's length away, and Jeff Buckley (orgasm from the loud woman behind me) coming up to him backstage at a festival in France and saying, "You're gonna teach me some of that slide guitar."  He played a cover of Leonard Cohen's "Hallelujah," popularized by Buckley, to a standing ovation.  After the applause died down, he commented, "Jeff accomplished in one record what the rest of us are left here to try and do in a lifetime."

After the instrumental "Number Three," Ben closed his set with one of his signature songs, the pro-marijuana "Burn One Down."  "Not at Carnegie Hall," he advised with a chuckle.  At least he knew he wasn't at Bonnaroo.  Midway through the tune, he disclosed that Damian Marley once questioned him, "'Is it if you don't like my fire, or if you don't light my fire?'  I said, 'Damian, you know better than anyone, it's both.'"  When the song was over, Ben waved to the balconies, and exited stage right.

Two minutes later, he returned and took at seat at the piano to hammer out new song "Trying Not to Fall in Love with You."  He admitted that he was more excited than nervous to play Carnegie, explaining with a story: "These kids came up to me and said, 'You're playing 3-hour-plus shows.  You're like the new Boss.'  And I thought to myself, 'I'll be damned if affirmative action doesn't work.'  That's what I thought.  I said, 'No, branch manager.'"  The Boss had invited Harper to play at Bruce's Kennedy Center Honors, and described performing in front of Springsteen, Mel Brooks, Rober De Niro, and President Obama as "the ceiling of nerves."  In tribute to Bruce, he did an exciting rendition of "Atlantic City," turning the mic to the crowd to the crowd for the final refrain.

But that was only the start of what would be the 54-minute encore, where Harper reached back into his catalog to revive old favorites like "Not Fire Not Ice," "Power of the Gospel," and "Welcome to the Cruel World."  The show could have bookended with the instrumental "Exhale," but surprisingly, Ben brought his chair downstage, even in front of the suspended stage mic, to play "Suzie Blue" on ukulele.  I'd been sitting on the edge of my seat the entire evening, and when the song ended, it was only natural to stand fully and applaud the first musician I'd seen at Carnegie Hall.  Before leaving the stage, Ben looked out into the audience and said, "This city has defined me in more ways than any other city in the world.  Thank you all so much for a night like tonight."  Thank you, Ben.

SET –
All My Heart Can Take > Mutt > Pleasure & Pain / Blessed to Be a Witness / Excuse Me Mr. / Fight Outta You / Diamonds on the Inside > Masterpiece / Younger Than Today / Trouble Man > Indifference / Number with No Name / Please Bleed / Another Lonely Day / Walk Away / Hallelujah / Number Three / Burn One Down