Before summer even started, tickets went onsale for Frank Turner at Webster Hall on the last day of September.  I bought mine the first day, and it was a good thing too, because the show quickly sold out.  The previous night on the calendar was then added for those who missed the first sale and those who wanted a double-shot of the hard-edged acoustic rock of the former punk and brilliant wordsmith. 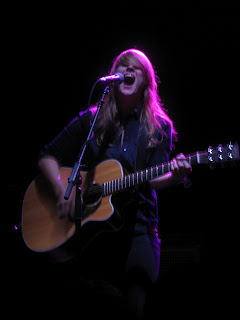 I arrived at the venue just as Jenny Owen Youngs took her spot stage right with nothing more than a microphone and an acoustic guitar.  I've been listening to Miss Youngs for a few years now, but I'd never seen her live, nor did I know she had a new album out.  The cutie with the potty mouth opened with a trio of tunes from An Unwavering Band of Light, her blue eyes obscured by a curtain of bangs as she belted out her snarky-sweet lyrics to the ceiling.  JOY revealed that an X-Files episode in which cockroaches burrowed under townspeople's skin was the inspiration behind "Clean Break" ("Here is a love song through that filter.  So you're welcome."), and after fumbling through the bridge of the seldom-played "Already Gone," announced giddily, "Guess what?  We just made a new bridge together and it's very exciting."  She explained that she was going to play a cover that was a singalong, and that she wanted us to join.  "Some people are like, 'Why don't you fucking sing along, dick?'" she teased, and went into Johnny Cash's "Ring of Fire."  At the song's completion: "You nailed it… to the cross!"  She closed with "Last Person," playing with such vigor that she broke a guitar string.  I saw her after the show giving hugs and high-fives to fans at the merch table.

Having never seen or heard of Larry & His Flask before, I was hoping for some old blues musician, who would sit on a stool, swilling whisky between songs, progressively getting drunker throughout his set.  It turned out to be a sextet who played raucous songs on a variety of organic instruments, including mandolin, baritone horn, banjo, and double bass.   A mosh pit opened up directly behind me, and I wasn't pleased to have to spend their 41-minute set protecting my back.  I wasn't really into them either, but I did enjoy "Beggars Will Ride" and what they called their only love song, "I'll Be Gone."  Guitarist/vocalist/sweatiest man alive Ian Cook descended into the crowd for the last number, urging everyone to squat low to the ground until erupting into a giant brawl at the song's climax. 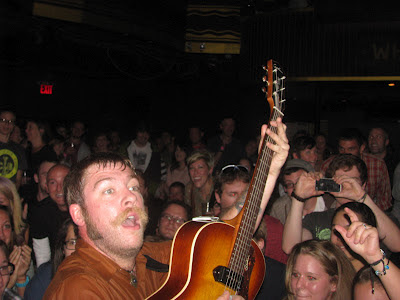 I moved towards the center of the room before Frank's set, so I wouldn't have to put up with the monkeys on my back.  Turner, reinforced by his band the Sleeping Souls, entered the stage to a recording of the somber horn intro to "Eulogy," proudly picking up the song where the vocals kick in.  Pausing briefly after the song, Turner moved into "The Road," which brewed a moshing hurricane where the pit had been for the Flask.  The floor beneath my feet shook like a bounce castle, but at least I had a good two- or three-person buffer between me and the mayhem.

After the joyous "Glory Hallelujah," the band seamlessly went into an excellent "Reasons Not to Be an Idiot," one of my favorite FT songs.  "Tomorrow we're flying back off to the West Coast to record a brand new album," Frank said, unveiling new song "One Fine Day" as an indictment of the film Amélie.  Turner revealed that we were taking part in a crowd participation exam, and that we'd already passed test one, which was clapping along.  The "ba ba ba"s of "Wessex Boy" would be our chance to complete phase two: singing along.  We passed.

Even though Frank Turner used to front post-hardcore band Million Dead, I'd never seen crowdmembers slamdancing at his shows.  And at any concert, I'd never witnessed people actually pulling unwilling participants from the barriers of a mosh pit into its riotous eye.  While some of Turner's songs could incite this sad excuse for dancing, "Substitute" is not one of them.  A beautiful song about trading music for love, it should never lead to violence.  But it did.  Idiots. 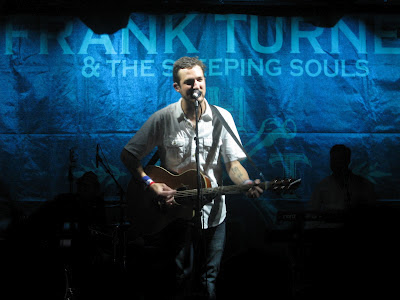 But that's the worst they could do to ruin a song, right?  Nope.  The Sleeping Souls left Frank to perform two solo songs, including the unreleased "Wherefore Art Thou Gene Simmons," which explores the inherent sadness in Simmons' admission to having had sex with 4600 women, remembering them only by a stash of Polaroid photographs.  I wasn't surprised to find out that people who fight each other to music have no concept of rhythm, exemplified by three assholes clapping offbeat during the tender song.

He followed "Gene" with "Dan's Song," where we were informed of the third part of our examination: playing an instrument.  "I'm not Skrillex, so I can't afford to give everyone in the crowd a guitar to play along," Frank laughed.  Instead he walked us through how to play an air harmonica, where you just make loud noises while holding an invisible sandwich in front of your mouth.  We did a trial run, to which Frank responded, "Solid 5 out of 10, New York. You do realize this is the single biggest headline I've ever done in the United States of America."  The revelation inspired us to step up our air harmonica game, but even that didn't compare to the real harmonica played by keyboardist Matt Nasir on "I Knew Prufrock."

My favorite song of the evening was "One Foot Before the Other," which has always sounded out of place on the album, but the combination of flashing lights and driving bass really set this one ablaze.  When it got to the Muse-esque breakdown, I couldn't help but laugh at what a great time I was having.  The tune was followed by "Four Simple Words," in which the final phase of the test was divulged: dancing.  "Now, the people in the middle pushing into each other is a valid form of dancing," Frank claimed, though I have my disagreements.  "But you could also do the Charleston," he offered.  Hyped up by the info that Turner had been keeping stock of which city had the best dancing on the tour, and that the previous night's show held the current record, we danced or hearts out, though our effort seemed to go unnoticed. 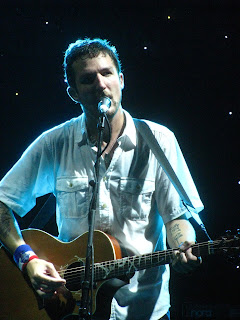 After set-ender "I Still Believe" with Jenny Owen Youngs on actual harmonica, Frank revisited the stage alone for an encore.  Twinkling lights behind him, he played "St. Christopher is Coming Home" for someone whose name he couldn't recall.  The Sleeping Souls came back for "If Ever I Stray" along with "Photosynthesis," in which Turner finally acknowledged, "Thank you so much, Dance Champions of the United States of America!"  (Tangent: It's sort of funny how he said the full name of our country, considering we'd say England, or leave out the Great in Britain, or save time with the acronym, UK.  I think the only time most Americans say "United States of America" is when they're reciting the Pledge of Allegiance or talking about that band that sang "Peaches.")

Congratulations to Frank Turner on a successful tour.  I got an insider tip that he'll be back in NYC in April, so get your tickets as soon as they become available.  Unless you're one of the dicks in the mosh pit that only learned about Frank from Bamboozle.  Then just stay home.

SET –
Eulogy / The Road / Peggy Sang the Blues / Long Live the Queen / Glory Hallelujah > Reasons Not to Be an Idiot / One Fine Day / Wessex Boy / Substitute / Wherefore Art Thou Gene Simmons / Dan’s Song / I Knew Prufrock Before He Got Famous > I Am Disappeared / One Foot Before the Other / Four Simple Words / Try This at Home > I Still Believe (feat. Jenny Owen Youngs)

ENCORE –
St. Christopher is Coming Home / If Ever I Stray > Photosynthesis (feat. Larry & His Flask)
at 2:16 PM