Known for their reggae cover albums of OK Computer, Sgt. Pepper's, and their masterful debut Dub Side of the Moon, Easy Star All-Stars brought together these dub tributes with ones from their latest record, Thrillah, last night (and into today) at Irving Plaza.

I decided to have a delicious meal in Brooklyn over getting there for Passafire, another Sublime clone.  Thankfully I arrived just in time to see this video playing on the screen in between sets: 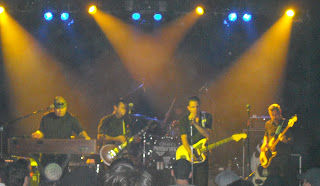 I could have watched it all night, but L.A.'s Aggrolites had to go on.  They opened with a medley of "Free Time," "Work It," and "Faster Bullet," and rarely took time to pause for the duration of their 53-minute set.  Their brand of "skinhead reggae" was enjoyable enough, mainly thanks to Roger Rivas' impressive organ workouts.  With shoutouts to Delroy Wilson and Ernest Ranglin, the fellas have obviously done their homework, and it paid off with crowd singalongs for "Mr. Misery" and closer "Don't Let Me Down."

A little after 11pm, the main act crept onto the stage.  They opened with Radiohead's "Electioneering," which they have definitely transformed into their own song.  "Wanna Be Startin' Somethin'" started off the MJ hits, but as on the album, it was too faithful a cover for me personally.  Following that with "Lovely Rita," it became clear they weren't going to play the LP straight through.  Kirsty Rock sang "P.Y.T." and bassist Ras I Ray and axeman Shelton Garner, Jr. sparred on "The Girl is Mine."  While not bad, "Girl" was lacking the soul it has on the album, where Mojo Morgan (of Morgan Heritage) and David Hinds (of Steel Pulse) trade lines.  This is the main shortcoming with Easy Star live.  For their records, they have been able to enlist the vocal talents of such reggae luminaries as Toots Hibbert, Sugar Minott, and the Mighty Diamonds, but as a touring band, their voices aren't on that same level.  The only guest they were able to wrangle was some Donal Logue-looking motherfucker from Passafire for "Karma Police."  Sure, their dub arrangements of classic songs are inspired, but their original material is limited both vocally and lyrically, "Bed of Rose" withstanding. 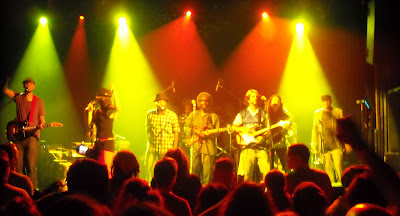 After a nice Dub Side trip that went "Climbing Up the Walls," Ras I Ray plucked a string on his bass and instructed the crowd to hum the note. We hummed, but not loud enough. "Although I've been smoking, based on the number of faces out there I see, there should be much more 'mmm' than that," he egged us on. We hit the note louder and longer. Ras hugged himself with delight. "That was one love," he said, and the band went into "With a Little Help from My Friends," a crowd-pleaser.  Then they backed the group's toaster, Ruff Scott, on his dancehall track "Tell Dem Fi Gwaan."  Over the course of the night, all seven singles from the Thriller album were played, finishing their set with the title track, which went into spooky dub territory with Ruff Scott croaking out the Vincent Price voiceover.  "Billie Jean" found its way into the encore after a solo "Redemption Song" by Shelton that was sadly interrupted by some dipshit in a yarmulke.  And it wasn't even a cool yarmulke like this one: 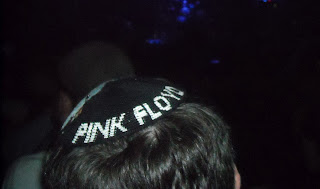 And if you want to see how people dance to this music, here's how their version of "Billie Jean" affected a fan in Baltimore earlier this year.
When the bong hit and cough samples singalled the intro to "Money," my favorite of their Pink Floyd renditions, I got really excited. Unfortunately, they played the song at a quicker tempo that didn't serve it well. With a dub band, it's not about how fast you can play; it's about how slow. While I had a good time, I feel like if they brought along some of their featured guests on tour, the show would've improved greatly. On their own, I wouldn't mind seeing them as the house band at some Caribbean resort.

SET –
Electioneering / Wanna Be Startin’ Somethin’ / Lovely Rita / P.Y.T. (Pretty Young Thing) / The Girl is Mine / Karma Police (feat. Passafire) / Breathe > On the Run > Time > Climbing Up the Walls / With a Little Help from My Friends / Tell Dem Fi Gwaan / Beat It > Any Colour You Like > Human Nature / Thriller