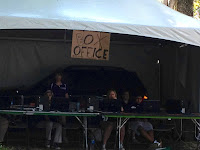 My friend got tickets to Virgin Mobile FreeFest, so we headed down to Merriweather Post Pavilion in Maryland to check it out.  We entered through Symphony Woods, walking by Sharpie-on-cardboard signs denoting the box office and other lines.  Considering it was a free concert, they couldn't be wasting money on fancy signage I guess. 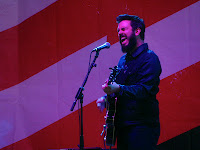 After picking up a complimentary blanket at the LG Chroma Cube, we made our way to the Pavilion Stage to see Justin Jones.  A bartender at D.C.'s 9:30 Club, Jones became the first artist signed to 9:30 Records when he released The Little Fox EP in 2010.  This year, he dropped Fading Light, his fourth full-length of blues-influenced Americana.  Styles onstage ranged from the bluesy stomper "I Can Feel It" to the atmospheric guitars of "As It Turns Out," its intro "Ghosts" initially sounding like when you turn on a Nintendo Wii.  I spotted next performer Allen Stone in a seat nodding his head to the beat. 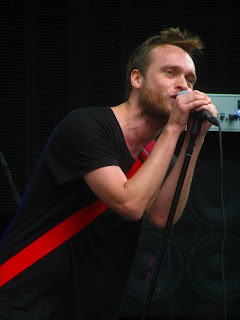 Though I was interested in seeing Stone, I had to see if Penguin Prison were going to play instruments or if it was just going to be a Chris Glover DJ set.  Situated on a hill in the woods, the Dance Forest Stage was located directly beneath a canopy of oak trees, with acorns and branches dropping onto spectators as the wind picked up.  We found a relatively level piece of ground and were delighted to find Chris backed by his band.  He played a similar set to when I saw him at Brooklyn Bowl, and he was killing it vocally, especially his exuberant scream in "Don't Fuck with My Money."  It was great to finally see him perform outside again, like I did when I discovered him in '05.

My brother was working at the show, so we stopped by to say hi, and then ventured over to the West Stage to catch what we could of Portugal. The Man.  The transition in vibe from the pavilion to the open parking field was substantial.  Hula hoops, people on blankets, and a Ferris wheel made it feel like a festival, not just a concert.  We made it in time to hear an extended jam out of one P.TM song and their closer, "All Your Light (Times Like These)." 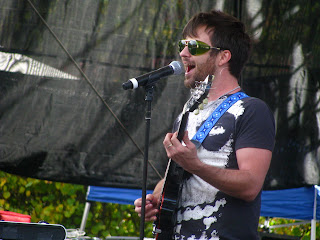 The mass of people dissipated, and we snagged an insanely close (second row) spot for the Dismemberment Plan.  I'd seen Travis Morrison open for They Might Be Giants back in 2004 (At the merch table, he personally taught me the trick of unhinging the front of a jewel case to remove the sticker on the spine.), but I'd never seen the Plan in their heyday or since reuniting.  "I wore my special Misfits shirt just for all y'all.  We're gonna do 'Mother' in a little bit," Travis joked.  Maybe they did (We had to leave early to see Ben Folds Five.), but while we were there, we got a mix of old favorites and new tunes.  They are, in fact, going to release a new album, and I got to hear two of the songs, including one that is sure to be a featured member in the D-Plan canon, "Waiting."  "Can everyone salute me?" Travis asked as they started the grooving tune.  His interaction with the crowd extended to having us all greet the people on the Ferris wheel with "Hi Ferris wheel!"  And then he started picking out specific cars: "Yeah, you in the kind of lime green one.  Keep waving."  As I was departing during "You Are Invited," Morrison messed up the second verse, announcing, "I'm gonna start the verse over again."  When he flubbed it a second time: "No!  What is happening to me?"  I trust they eventually made it through the song, but briefly flirted with the idea that I may have been the band's good luck charm.

As we were walking back to the pavilion, I saw someone wearing a t-shirt that read, "Sex, Drugs, and Dubstep."  I decided it was the worst thing I'd ever seen, shuddering when I realized the implication that dubstep has replaced rock 'n' roll.  A video played on the screen of Virgin Mobile Live's Abbey Braden announcing a Skrillex lookalike contest.  "If you look the most like Skrillex, we have a prize for you."  "I hope it's plastic surgery," I jested.  (If you can't yet tell, I didn't see Skrillex, so stop reading now if you thought I was gonna review him.)
We took our seats for Ben Folds Five just as Ben took his seat… and slammed it into the keys of a Baldwin grand piano.  I'd seen Ben solo way back in the Jenny Eats Something days, and was amazed by his energy.  I suppose Darren Jessee and Robert Sledge subdue him a little because the stool-hurling was the most raucous he got.  While the mixture of fuzz bass, jazzy drums, and staccato piano was still captivating after all the years apart, it didn't sound too good due to some technical issues and the bleed of Nervo's set from the Dance Forest.  However, that didn't stop the crowd from singing along on "Underground," "Song for the Dumped," and their biggest hit, "Brick."  "It's good to be back in this part of the country.  We used to play the 9:30 Club a lot," Ben told the crowd, many of whom had probably seen BFF there sometime in the '90s.  Other songs included Folds' "Landed," latest single "Do It Anyway," and the closer, "Army." 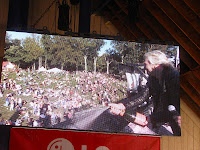 After being impressed by Santigold at StePhest Colbchella, I wanted to see her again, but needing nourishment and wanting to keep our fourth row seats, I stayed in the pavilion.  On the roof, Virgin owner, Sir Richard Branson poured champagne on concertgoers to thank us for coming and flaunt how rich he is.  In his defense, proceeds raised from previous Virgin Fests have built a homeless youth shelter in D.C. called RE*Generation House, and this year's donations will open its doors.  My friend went to get our dinner while I saved the seats. 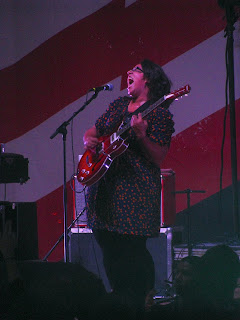 A girl seated next to me chose me as her Alabama Shakes comrade.  I told her about how when I saw them at Summerstage in June, I was impressed by the musicianship, but not their stage presence.  They'd have to win me over, and guess what, they did.  While bassist Zac Cockrell still only moved slightly more than a well-timed bobblehead, Brittany Howard was absolutely magnetic.  She was wearing a blue dress with red dots and sporting a straightened hairdo, but you couldn't take your eyes off her face.  If you were a deaf person, you could've learned all the vowel sounds just by the way her mouth moved, soulful howls bursting out of the gaping hole.  She also backed away from her mic stand to move around more when not singing, which was an improvement.  As "Be Mine" started, the girl beside me grabbed me by the hand and shouted, "This is our favorite song!"  I'd only just met her, but judging by this performance, she was right.  Brittany went guitarless, walking around the stage with purpose and shouting the lyrics with passion.  The crowd roared its approval at its close.  Unfortunately, and this was the only problem I had with the festival, my friend was trapped outside of the pavilion for every song but the final "You Ain't Alone" because security wasn't letting anyone in.  This would've been justifiable if it was at capacity, but there were still some seats available, and they kept the whole left canopied section empty for the entire festival.

We sliced our way through the thickening crowds to head back over to Nas at the West Stage.  We made it time to hear some of his hits like "If I Ruled the World" and "Hate Me Now," the crowd performing Lauryn Hill's parts on the former.  Nas was only backed by a DJ, a live performance technique that I've never found very visually arresting, so I spent much of the set watching my hand wave up and down in the crowd shots on the screen.  "It's because of you that I made music all these years.  You and one little person," Nas confessed before the recently released "Daughters."  He closed it out with "One Mic" followed by a singalong of the Wailers' "One Love." 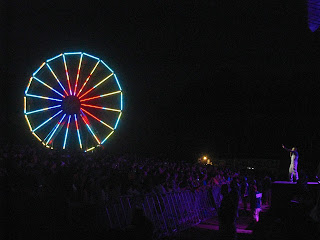 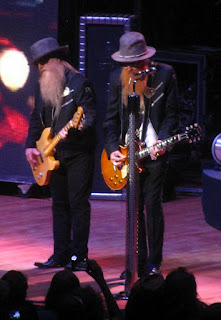 We returned to the amphitheatre to find it packed for ZZ Top, the entire crowd on their feet for the first time.  We were standing in the aisle for a minute before security told us we had to move, and miraculously, I found two seats on the end of a row.  The bearded rockers chugged their way through a set of newer songs and the classics.  After a one-handed guitar solo by Billy Gibbons, Dusty Hill raised the question, "How's that guy playing guitar with one hand?"  Billy flipped the guitar around to reveal the word "BEER" on the back of its body.  Although I have no clue what that's supposed to mean, it sums up the Top perfectly: authentic hard blues rock with a campy white-trash exterior.  They conveniently modified "My Head's in Mississippi" to "My Head's in Maryland," and introduced new number "Chartreuse" as "so new I've gotta have Elwood bring me the words," with their longtime guitar tech taping the lyrics onto the stage.  After the crowd-pleasing "Sharp Dressed Man," they busted out their Persian cat-looking, furry guitars for "Legs."  An uninterrupted threesome of "Tube Snake Boogie," La Grange," and "Tush" ended the show with cheers for an encore. 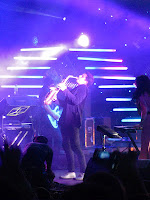 We squirmed through the forest to see what was left of M83.  The opening notes of "Midnight City" were met with shrieks of delight, only topped by the explosive saxophone solo at the song's end.  The light show for M83 was the best I saw at the festival, and keyboardist Morgan Kibby's boob was the only one I saw at the festival, sneaking out from the inside of her flowing, white dress.

Having no desire to stick around for Skrillex, we joined the march of fans heading back to the pavilion for Jack White.  Finding the seats to be blocked to anyone but VIP ticket holders (and the invisible people in that left section), we stationed ourselves on the hill.  Accompanied by a band of women dressed in white, Jack took center stage dressed in black.  Blue lighting cast a spooky glow on the scene, transforming the women into specters as White enchanted them with his guitar.  Starting with songs from Blunderbuss, "Sixteen Saltines" and "Missing Pieces," Jack paid tribute to ZZ Top by injecting a bit of "Jesus Just Left Chicago" into the mix.  A duet with Ruby Amafu on "Love Interruption" was followed by the rollicking "Hotel Yorba."  The set continued with songs spanning White's career with the White Stripes, the Raconteurs, the Dead Weather, and solo, concluding with "Ball & Biscuit."  The encore started with the rocking "Steady, As She Goes" right into "Freedom at 21" before taking a gentler turn with "We're Going to Be Friends," "Blunderbuss," and Jack taking a seat at the piano for "I Guess I Should Go to Sleep."  The evening came to its end with "Seven Nation Army," the Maryland crowd chanting the guitar riff "Ohhh-O-O-O-O-Ohhh-O" as much for the Baltimore Orioles making the playoffs as the man onstage.  "God bless you so much.  Thank you.  You've been wonderful," White obliged.  After last week's Radio City walkout, I felt special to have gotten the full show, for free, with so many fantastic openers. 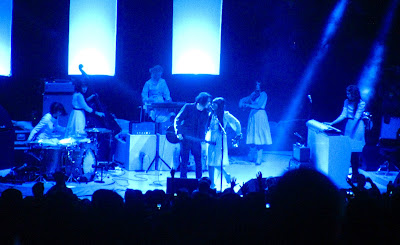 ENCORE –
Steady, As She Goes > Freedom at 21 / We’re Going to Be Friends / Blunderbuss / I Guess I Should Go to Sleep > Take Me with You When You Go / Seven Nation Army