Matt Butler may have the best job in the world.  As conductor of the Everyone Orchestra, he gets to assemble an ever-changing supergroup of his favorite musicians and make them jam together.  They play songs in whatever style he wants, and he chooses who he wants to solo and where.  Last night's show was the second in a three-night run at Sullivan Hall, assuming Hurricane Sandy doesn't cancel tonight's. 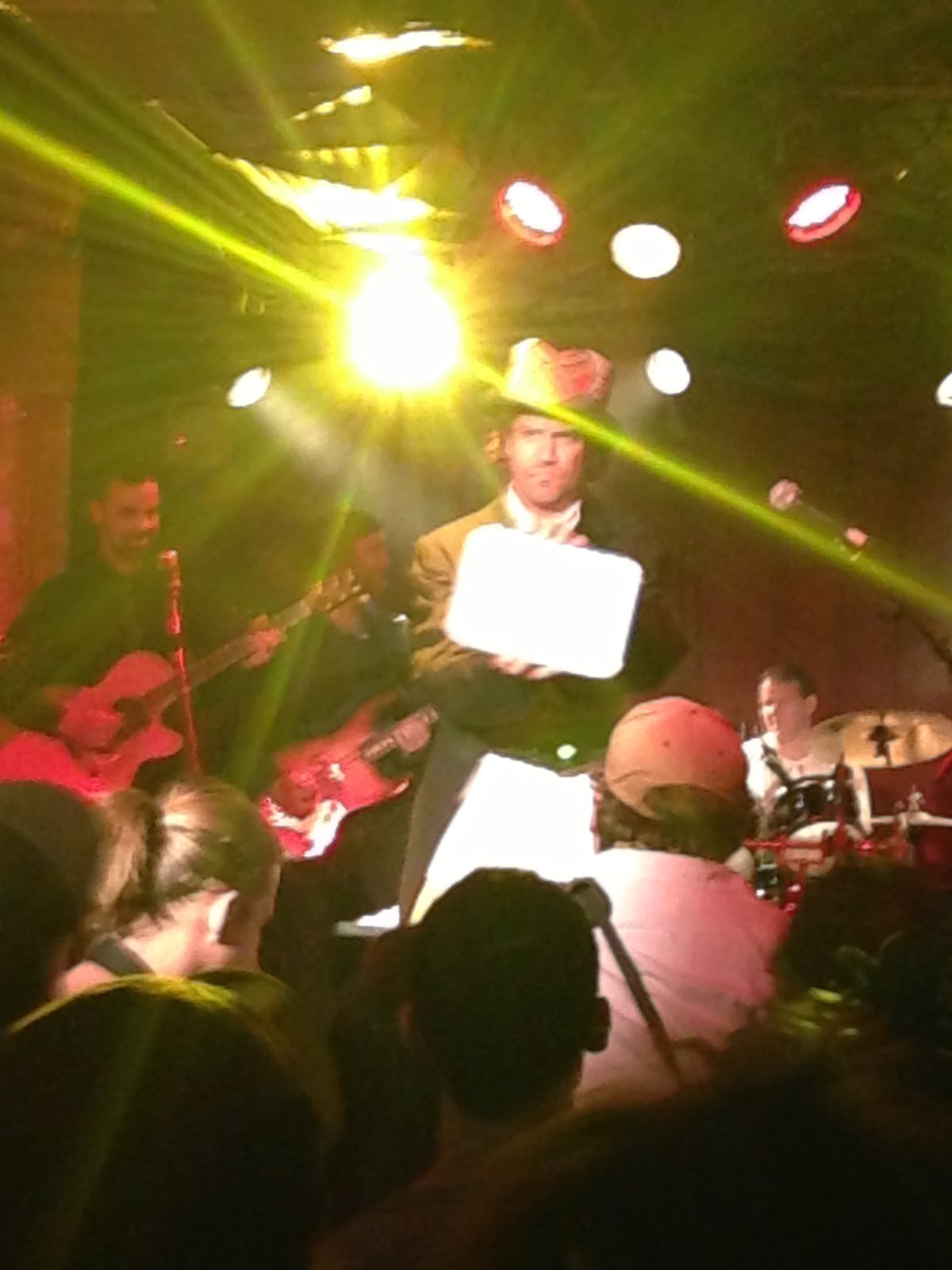 Though the venue's website said the show would start at 8:30pm, the band didn't take the stage until 10, Fishman looking just like some guy in a t-shirt without his dress on.  Donning a psychedelic top hat, Matt Butler placed himself at the center, and revealed the words "Funk A" written on a dry erase board.  (The setlist at the bottom includes the whiteboard instructions that were visible to the crowd.)  The orchestra charged headfirst into a furious funk number (no doubt influenced by the horn-heavy funk tracks the DJ had been spinning) cooking at a pace where Reed Mathis barely had time to scratch his nose.  The jam ended with Butler conducting the audience to scream, "Yes!" to the beat.  Butler scrawled "Follow Zach" onto his slate, and Zach Gill pulled out his melodica to start a simple melody.  Reading lyrics off his iPhone, he sang about Sandy, a wild woman with wipsy twig hair that spun him 'round and 'round like a hurricane.  Gill worried that his flight home would be cancelled, "But if I had to be stuck in one place in the world, I think I'd choose New York City."  The crowd ate up the topical ditty, and under Butler's lead, the band enacted the parts of the storm from the outer bands to the eye.  John Kadlecik had the next pick, and settled on a happy groove that would've felt at home in a 1970 Grateful Dead concert.  When it came to Lebo's part, he shifted the song dramatically, taking it into dark Neil Young territory, one of the boldest and most welcome choices of the night.  Butler softened up the section, and Lebowitz and Kadlecik doubled up on the melody, Jon's drumming helping the song to begin to delve into a Phish-style jam.  I guess Butler thought it smelled too Phishy, and instead of encouraging Kadlecik to soar like Trey, he shifted the focus to stage right, Jessica Lurie.  While moments of her sax solo came together powerfully, some bits, particularly at the onset, fell out of place.  The group ascended with the sax, and segued into a new jam led by Lebo.  Starting with a chord progression similar to "Pobrecito," the song never really developed into the funky workout that the ALO song becomes.  Butler attempted to save it with some rabble-rousing, getting the crowd to chant "Hey!  Vote!"  After a string of the voting chants, the song was over, and the set was over, a scant 49 minutes.

When the band returned for the second set, the crowd had noticeably thinned.  Perhaps those who left had been disappointed by the short first round that started off so promising and fizzled out at the end.  I found Jessica Lurie's showboating a little off-putting, especially when she'd try to put a spin on the vocal licks.  Ironically, it was her riff in set two that inspired one of the night's hottest improvised jams.  After a "spacious and groovy" mandolin-based exploration by Masefield, Butler wrote "Follow Jessica" on the board.  She laid down a chugging sax riff that recalled the night's earlier funky foray, and although Butler tried to change it up with some swing in D, he always found himself re-scribbling "Back to Jessica's riff."  Some flourishes on the theme by Lebo, Zach, and Reed had everyone smiling onstage and off.  John K. got his second turn, and commenced with a cover of "Walking in Your Footsteps" by the Police.  Reed thickened it up by inserting a P-Funk bassline, and played so fervently that he broke a string.

While Reed repaired his instrument, Dan was chosen to lead again.  He decided on the ALO song "Try."  I've seen ALO three times this year (at Brooklyn Bowl, on a boat, and at Farm Aid), but this time the song went places not even Lebo had predicted.  After a once-through shouting out the key changes to keep everyone on track, he started singing the often JGB-covered "Shining Star" by the Manhattans.  I'd seen him sandwich other tunes in "Try" before, most notably "Helpless" at the Troubadour, but after returning to the song, Butler held a sign up to Zach, requesting "funny lyrics."  Zach said he would rather speak from the heart, and admitted, "I'm gonna be honest with you guys.  I have a flying phobia."  Narrating his trip here, where he watched an episode of 30 Rock to quell his anxieties, things weren't funny enough for Butler, who egged him on.  "When in doubt, tell a joke," said Zach, choosing the silly one from childhood where you look down your shirt and spell attic.  Repeating "A-T-T-I-C" several times became its own melody, and shortly thereafter Dan and Reed started singing "You've got to try / just a little bit harder" into one mic.  As Zach expounded upon all the things in his attic including Christmas decorations and CD jewel cases, everyone was singing the line from "Try" together like a gospel song at the Grand Ole Opry.  Even after the number had ended, Dan was still joyously singing "You've got to try," and we can all hope this new version finds its way into some ALO sets.  With a laugh, Butler commented on Zach's fears, "You don't need therapy."  "I just need Everyone Orchestra every 6 weeks or so," Gill quipped.

Matt took some time to introduce the band, not referring to Jon Fishman by name, but saying, "He works on a phishing boat the rest of the year.  They practice sustainable phishing."  Zach introduced Matt Butler, but Reed was curiously left out.  Butler turned to Mathis and introduced him as starting the next journey, which was a mellow, meandering beauty.  Once the jam had reached its climax, Butler turned things over to Zach, who started up a howling cover of Warren Zevon's "Werewolves of London."  When the song felt too structured, Butler ripped it open by demanding increasingly longer measures of chaos, from 8 beats, to 16, to 32.  Turning to Kadlecik in the aftermath of the chaos, John K. only took it further, charging into the riff from "Crazy Train."  Everyone joined in on the instrumental tease, and the song ended with a roar.

The show could've (and maybe should've) ended there, but Butler wanted one more song.    He wrote "Disco" on the board, and the band embarked on a peppy jam, led by Fishman's hi-hat and Gill's croaky keyboard.  Butler took to the mic to sing "Goodnight to you" to the crowd a few times, but the song was essentially a cool-down.  One hour and 47 minutes after Masefield kicked off set two, the orchestra came center stage and took a few bows.  "We'll see you tomorrow night, guys, God willing," Butler said hopefully.  Even if Sandy is determined to thwart his gig tonight, his job is still the coolest gig out there.