If you're a folk fan who lives in New York and you weren't at Irving Plaza last night, you fucked up.  Chris Kasper welcomed the audience in with his metaphor-soaked lyrics set to simple acoustic accompaniment, and the Wood Brothers brought the house down with their jazzy twist on American folk music.

Fortunately I was able to catch Kasper's soundcheck, where he tested the levels on six tunes, including a pair that didn't make it into the night's proceedings: "When the Mountains Cry" and a cover of "When I Paint My Masterpiece."  With the mix to his liking, Chris and I dashed around the corner to Little Town to tape an episode of The Next Round, where we chatted about everything from burgers to magnets.  Make sure to look out for that.

"It's a thrill to be here on this legendary stage," revealed Kasper at the start of his set.  "Most of all, it's a thrill to have some people out there," he laughed, and dipped into "Ancient - Lo."  He was joined on violin by Kiley Ryan, who added just the right touches to the songs, from eerie wails on "Raven & the Rose" to antique washes of warmth on "Don't Want to Lose Your Way."  In addition to playing together on his most recent album Bagabones, Kasper and Ryan released a record as a duo under the name Foxhound, so they offered up that group's "Bask in the Light."  Prior to trucker-anthem "Belly," Chris announced, "I'mma sing it through my walkie-talkie here," motioning to his bullet microphone.  It gave his vocals the befitting quality of a CB radio, while Kiley supplied her own seductive backup vox and tambourine hits.  Chris went solo for "Blessed Little Secrets," an incredibly well-written love song about more than just ice cream and thrift stores, but also those too.  Kiley returned for Springsteen's "State Trooper," performed in honor of the turnpike they took to get to NYC, and her fiddling at the end of "Oh, Carolina" was absolutely hypnotic.

Halfway through the set break, Chris Wood appeared to drop the needle on a Little Walter LP, spinning on a small turntable atop a cabinet of unfinished wood.  With beams of light peeking through the slats, the stage was set for the trio to enchant.  The Brothers took their positions, Chris stopped the record player, and Jano Rix breathed some spooky notes into his melodica.  Oliver chopped gently at his guitar and began singing, "I see the backbone of a thin man."  And then Chris hit the crowd with that big double bass sound.  "Neon Tombstone" was the perfect choice for an opener, allowing the crowd to observe the parts as they tallied up to their glorious sum.  With his long blond tresses, Oliver gave off the appearance of a lovable, floppy-eared dog.  Although he kept his eyes closed most of the time, you could tell he was fully aware there was a crowd in front of him when he'd dig into his guitar, biting his lower lip with a shit-eating grin on his face.  After "Wastin' My Mind," Chris dropped in a bopping bass solo, which allowed Rix the time to migrate to the center of the stage with his "shuitar" (Say it out loud.), a busted guitar outfitted with finger cymbals, tuna cans, and other junk to transform it into a percussive instrument.  They decided to "Sing About It," and did so in wondrous harmony.  They followed with "The Muse," not ashamed to load the set with numbers from their latest LP.  "We got your cards and letters.  We're gonna get to all of that stuff," remarked Oliver. 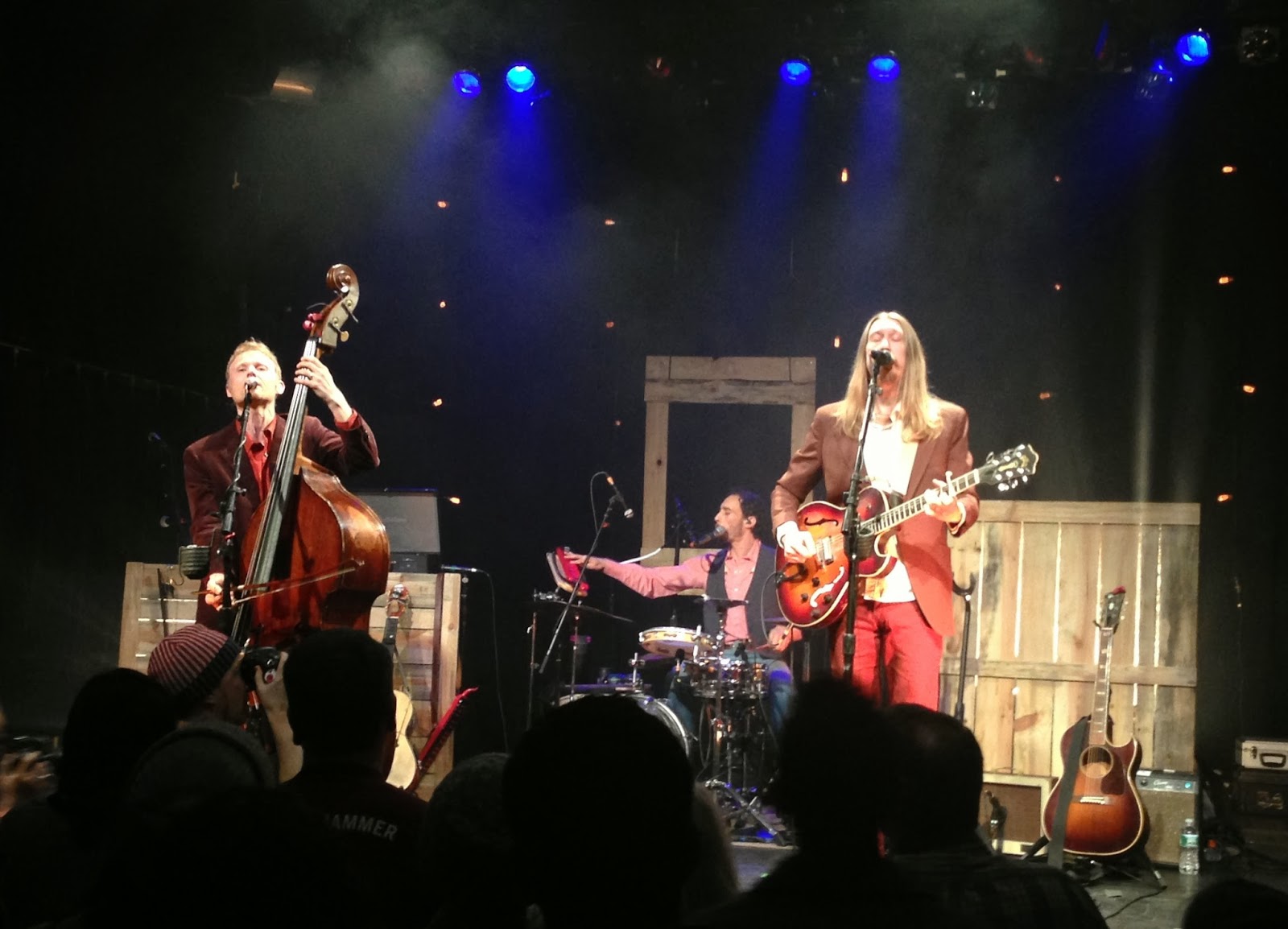 And they did.  "When I Was Young" shined, featuring not one, but two bass solos from Chris.  "Postcards from Hell" was specifically dedicated to music lovers.  "There's a big difference between music lovers and music likers," Oliver delineated, explaining that lovers are either musicians or concertgoers who really pay attention and experience it, not those "in the back tweeting, texting, and twerking."  A didgeridoo-ish bass solo linked "Twisted" with a spunky "Who the Devil" that had the crowd roaring for more.  The Brothers decided to shift the energy a bit, inviting Kasper and Ryan to the stage to sing with them around a center microphone.  Oliver warned the audience that the mic was very sensitive, adding, "It's only Thursday. Let's just chill out for a minute."  The five sang the traditional "Where Did You Sleep Last Night" with fiddle accents from Kiley.  Foxhound departed and the trio turned out a mesmerizing one-mic "Firewater."  Chris took lead vocals on "Losin' Streak" and even inserted the riff from "Low Rider" into his harmonica part.  "Honey Jar" was a fun one, its Meters-style strut giving way to a chorus as sticky as the title.  Anyone who follows the Wood Brothers knows that angels are a recurring theme, and they delivered a medley beginning with the soft "That's What Angels Can Do" before blossoming into the exuberant "Angel."  They wrapped up the triumphant set with a singalong of "Make Me Down a Pallet on Your Floor."

Of course, that wasn't the end.  Once he'd reclaimed the stage, Chris expressed his distaste for categorizing music by genre: "People say we're Americana, whatever that means."  Readying his upright, he continued, "Here's a song that's as American as any," and they launched into Michael Jackson's "P.Y.T. (Pretty Young Thing)."  Chris finally released his bass for "One More Day," wiggling excitedly around the stage.  In the rest before the song's last note, Oliver yelped, "Weeeee!  God dang it, this is fun!"  For all parties involved.  However, I did really want to hear "I Got Loaded."  I'll send a card next time.

SET -
Neon Tombstone / Wastin' My Mind / Bass Solo / Sing About It / The Muse / When I Was Young / Fall Too Fast / Postcards from Hell / Twisted > Who the Devil / Where Did You Sleep Last Night (feat. Foxhound) / Firewater / Luckiest Man / Losin' Streak > Low Rider (tease) > Losin' Streak / Honey Jar / That's What Angels Can Do > Angel / Make Me Down a Pallet on Your Floor