Glasvegas Build Their Wall of Sound in Williamsburg

"We are the Ceremonies.  Welcome to our ceremony."  With an intro like that and Matthew Cook's Robert Smith-y coiffure, I wanted to hate the L.A. band so badly.  But I just couldn't bring myself to do it.  You see, Matthew is not the band's only singer.  He shared the stage with his younger twin brothers, Mark and Michael, and the three harmonized as only brothers can.  While the doo wop stylings of "Straw Hat" succeeded more than the falsetto "Ballroom Bones," the brothers' vocals and constant instrument-swapping were winsome enough to not immediately write them off as a Depeche Mode tribute act.  I'm not running out to buy their EP or anything, but if I were casting an '80s college movie, they'd be a shoe-in for the band at the frat party.

I was there to see Glasvegas anyway.  Although their Phil Spector-meets-darkwave sound is capable of filling arenas, I was convinced there would be no better venue for it than the tiny 200-capacity Knitting Factory Brooklyn.  The melodic wall of noise began with the title track from their most recent LP, Later... When the TV Turns to Static, and didn't let up for over an hour.  Cloaked in darkness, the band was only lit with a few backlights, save for the occasional strobe illuminating the wrinkled sheet of a backdrop.  "It's My Own Cheating Heart That Makes Me Cry" was an early standout, with Jonna Löfrgen pummeling away on her drumkit without a stool in sight.  Ghostly figures spun in a waltz on the screen behind them, and James Allan set aside his thick brogue for a significant portion of the song to allow the crowd to sing the words.  And we pretty much nailed it.  Once the generous applause had a chance to dissipate, Allan revealed the origins of "Lonesome Swan."  Before he'd started Glasvegas, every day he'd walk by the water, where customers would rent pedal boats.  Well, except for the one shaped like a swan.  Eventually he felt so sorry for it that he took it for an embarrassing ride of his own. 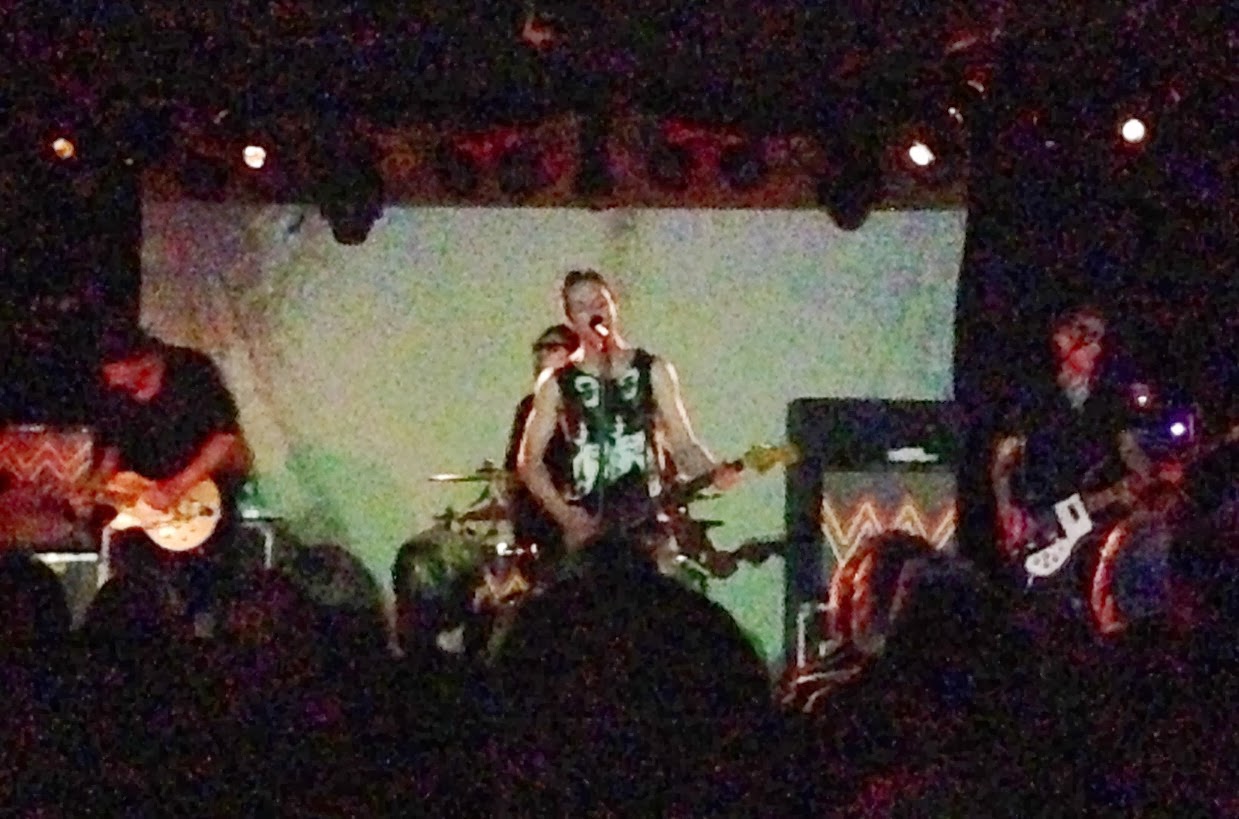 The guitar tones in "If" and "Secret Truth" exemplified the slightly more hopeful outlook found on the new record, while Löfrgen's skilled cymbalwork shined in "The World is Yours."  James took some time in between tunes to nag on bassist Paul Donoghue for being "unprofessional."  Mocking Paul's inability to read the setlist in the dark, James badgered, "What song's next?"  The audience seized the opportunity to shout requests.  "No, I wasn't asking you," clarified Allan with a smirk.  Not that anyone had reason to complain, with classic tracks from their 2008 debut comprising half of the show.  Unfortunately, "Geraldine" was too rushed, but they made up for it with the slow burn of "Ice Cream Van," Jonna going ballistic on the soaring denouement.  "Ice Cream" melted into "Go Square Go," and the entire room was chanting the anti-bullying rally by its end, when the band departed in a shower of feedback.

We cheered non-stop for a minute and a half before James Allan returned for a solo "Flowers & Football Tops."  Unlike the father in the song, the other members returned for "Daddy's Gone," Allan's cousin Rab providing the wishfully sunny backup vocals.  Building steadily into an impassioned frenzy of James' shouts, "Lots Sometimes" wrapped up my favorite show of the year... so far.