The first time I saw Chris Mills, he was opening for Ken Stringfellow at Mercury Lounge.  His excellent voice, adept lyricism, and witty banter endeared him to everyone in the brick-walled room.  His set consisted mainly of new songs to be released on an upcoming album.  That was almost a year ago, and now that record has finally arrived.  It's called Alexandria, and it was well worth the wait.  Last night at Brooklyn's Union Hall, Chris Mills & the Distant Stars held a concert in celebration of its overdue arrival.

Keeping it classy in a maroon suit, Mills took the stage with his bandmates: Clint Newman on guitar, Chris Buckridge on bass, and Konrad Meissner on drums.  While Konrad was the only one who had played with Chris on the album, it was quickly evident that this group was just as capable of delivering the goods.  They began as the LP does, with the introspective "Wild Places" before plunging headfirst into the striking title track.  Having played the first two tunes at the keys, Chris strapped on a guitar and rocked forth with "Calling All Comrades."  He followed it with two older numbers, "Watch Chain" and "Escape from New York," before returning to the new record with "Blooms."  I must admit I was a little surprised to be hearing so many non-Alexandria songs, considering they had made up the bulk of last year's setlist, but he was solo then.  This time, he had a band, so he wanted to rock.  He also made it a point to draw from almost every stage of his career, so kudos to him for that. 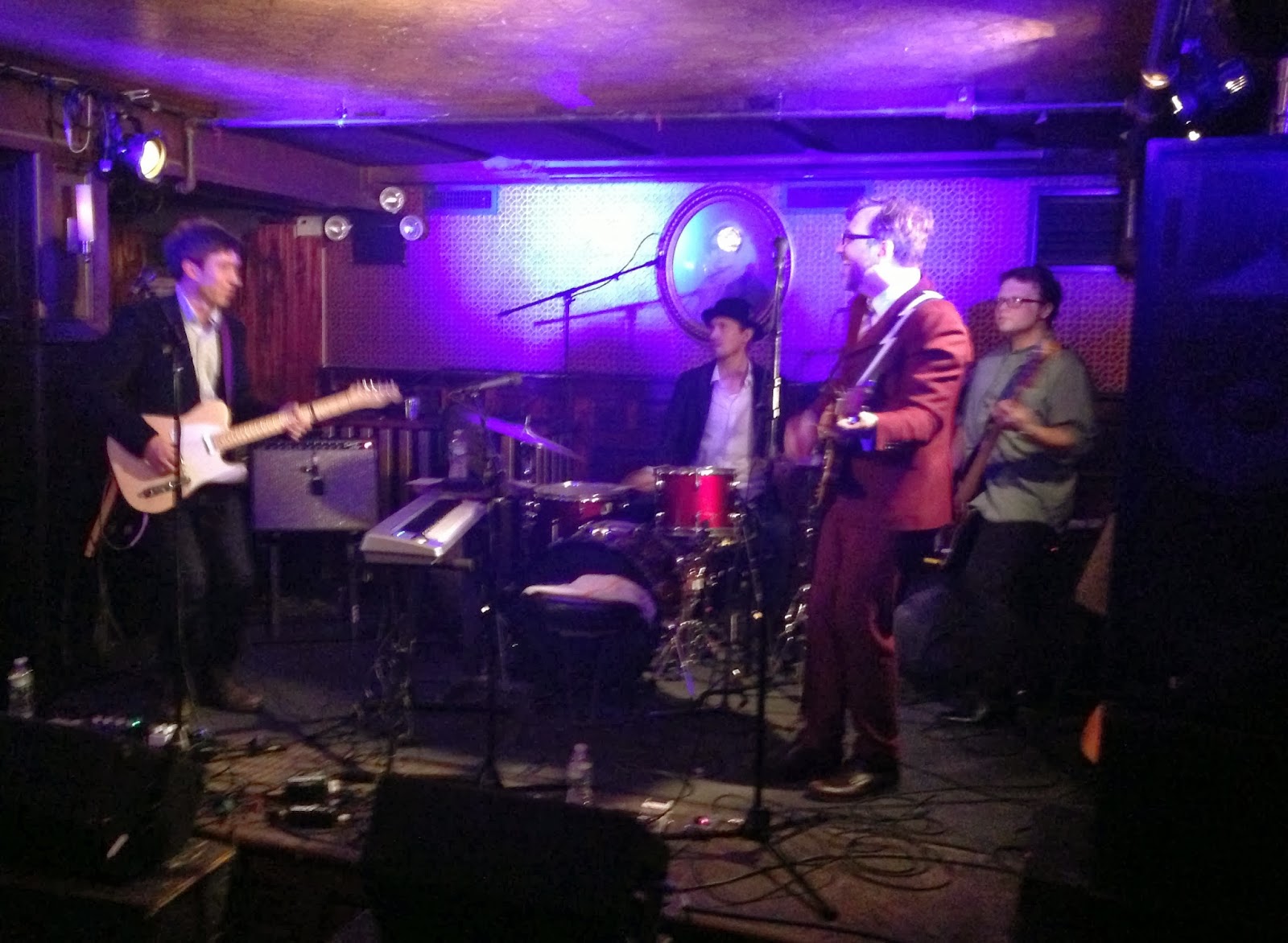 "I just took a tour of the polar vortex.  St. Paul is lovely on a Sunday night at 40 below.  A lot of people want to come to that show," said Chris, gracious that we had braved the ice to make it.  The inclement weather also likely had a small effect on his vocals (occasionally already labeled "weathered") on songs where he had to shout over the guitars.  Peculiarly, the ones where he let his voice take the forefront were the night's shining moments.  The end of "Rubicon," which he finished a cappella, was enough to cause chills rivaling those outside.  After the alt-country "Crooked Vein," Mills returned to his seat at the keyboard.  Someone in the crowd shouted a request of "1000 Blue Eyed Girls."  Chris laughed, "Deep cut.  You gotta email that in," and proceeded with "Chris Mills is Living the Dream."  "Castaways" ended righteously with Mills, Newman, and Buckridge repeating, "Are you waiting to come ashore?" before Chris' final epic "What are you waitiiiiiing forrrrrrrrrr?"  A thank you to all those who donated to the LP's Kickstarter and a quick plug for merch ("If you're not on the email list, sign up for the mailing list.  Don't be a dick.") were chased with the Who-evoking closer "Brand New Day."

It wouldn't be a release party without an encore, so Chris claimed the stage yet again.  Although it's a piano ballad on the album, Mills picked up his acoustic for "The Sweet Hereafter."  As mentioned, it was a real treat to hear that emotive voice without all the added volume of a band.  The Distant Stars reappeared to assist on "Thank You Friends," a Big Star tune that in context, felt as if it were expressly written as the theme to crowdfunding.  But really, you should pick up the album.  It's Chris who deserves the thanking.

ENCORE -
The Sweet Hereafter / Thank You Friends
at 1:21 AM