Deer Tick played a free show tonight at Death by Audio in Williamsburg, Brooklyn for a crowd of about 200 people (That's how many people the website said could fit, but that seems a little much). Sponsored by Brooklyn Vegan, the show was to help raise awareness for the police brutality occurring during the Occupy Wall Street protests. Here's a YouTube video of a protester being taken down to the ground by a police officer.
Admittedly, we can't see or hear if the guy threatened the officer before this clip, but it does seem excessive considering the kid is unarmed. Now that you're aware, onto the show...
The venue was tiny and dingy and reminded me of pictures/videos I've seen from the early '80s East Village, where underground bands would perform in apartments and art studios. People were smoking inside, the bathrooms were filthy, and shitty beer was being sold on a makeshift bar (read: fold-out table) in the back room. But this is exactly what you want in a small exclusive show like this. Hell, the band were all hanging out in the back prior to the start. That hangout vibe remained for the whole concert, which felt more like a party at a friend's than a rock show. 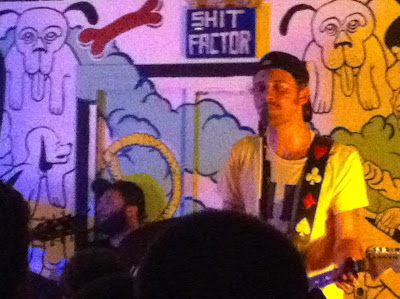 Starting off with a tease of "Sweet Child o' Mine," Deer Tick moved into Hank Williams' "Move It on Over." They followed with new song "The Bump," which has a fitting chorus of "We're full grown men, but we act like kids!" The band really hit their groove when they funked around with "Spend the Night," powered into The Mats' "Bastards of Young," revealed newbie "Chevy Express," played crowd favorite "Not So Dense," and brought out some Deervana with "On a Plain." "That was Kurt Cobain," remarked the drunk guy behind me. And if that weren't enough, how about a cover of "Juke Box Hero" by Foreigner? I thought they played a lot of covers on Pier 54, but that was nothing compared to tonight's fifteen, with Hank Williams, the Rolling Stones, Buddy Holly, Chuck Berry, Townes Van Zandt, Bob Dylan, the Beatles, the Shivers, and Michael Hurley also represented.
After reprising the "Sweet Child" solo, McCauley screeched out a wonderful "Christ Jesus," and led the crowd in a rowdy "Let's All Go to the Bar," which ended in a stage dive. As he surfed along the crowd, he punched at the ceiling above him, which made for a strange dichotomy with the show's mission. But you don't have a Deer Tick show in a sweltering room in Brooklyn and expect everything to go perfectly smooth; just like you shouldn't with a peaceful protest on Wall Street. I'm not condoning the actions of the police. I'm just noting that a lot of times things can go awry at nonviolent protests. We should not give up the right to peaceably assemble by any means; just know that the government will do whatever it thinks is necessary to contain you. Don't be surprised if it doesn't work out right away. Keep trying.

Sweet Child o’ Mine (tease)> Move It on Over / The Bump / Easy / Dead Flowers / Ashamed / Walkin Out the Door / Baltimore Blues No. 1 / I’ll Never Get Out of This World Alive / Main Street / Oh Boy! / Standing at the Threshold / Clownin Around / Funny Word / Spend the Night / Bastards of Young / Chevy Express / Not So Dense / On a Plain / Juke Box Hero / Maybelline / Little White Lies / Cocaine Blues / Tonight I’ll Be Staying Here with You / Something to Brag About / One After 909 / Houston, TX / L.I.E. / Christmas at the Chinese Restaurant / Now It’s Your Turn / Can’t Hardly Wait / Be Kind to Me> Sweet Child o’ Mine (tease) / Christ Jesus / Let’s All Go to the Bar