Friday night's George Clinton show at B.B. King Blues Club was scheduled to start at 8:00, so I figured I'd be safe arriving around 7:45.  I'm glad I got there early though because I crossed the threshold just as the Bernie Worrell Orchestra was starting "So Uptight (Move On)."  I hurried to the floor to watch.  The round of horn solos seemed a little gratuitous so early in the set, but then Bernie took charge with a super-funky ride on his custom purple Little Phatty Moog, teasing "Do That Stuff" at the song's end.  "This next piece is about bullies," he announced, and detonated the volatile "Thug."  After a dank bass solo from Scott Hogan, Shlomi Cohen took the reins with some staccato sax.  Normally a soloist will have their eyes closed or raised towards the sky, but not Cohen, who kept his wide open, staring straight into the crowd.  Worrell whipped up a warped take on "Angels We Have Heard on High" before returning to "Thug," hints of some James Bond spy shit seeping in from the guitars.  Bernie took a moment to acknowledge the Orchestra, and then welcomed Dr. Funkenstein himself, George Clinton.  The old friends removed each other's hats as they embraced.  Prepping us for an explosion, Clinton spoke the metered lines of "We Do This" before turning to Bernie and commanding, "Do it to 'em in their earhole.  Stick it in."  But no sound came out of Worrell's keyboard.  As he checked the connections, George began reciting the lyrics to "Red Hot Mama," hoping Worrell would be able to jump in soon enough.  The issue remained unresolved, so he soldiered on with his verse from Wu-Tang Clan's "Tar Pit."  Eventually, the sound was straightened out, and they rode on with "Red Hot Mama."  It sure looked good to see Bernie and George up there together. 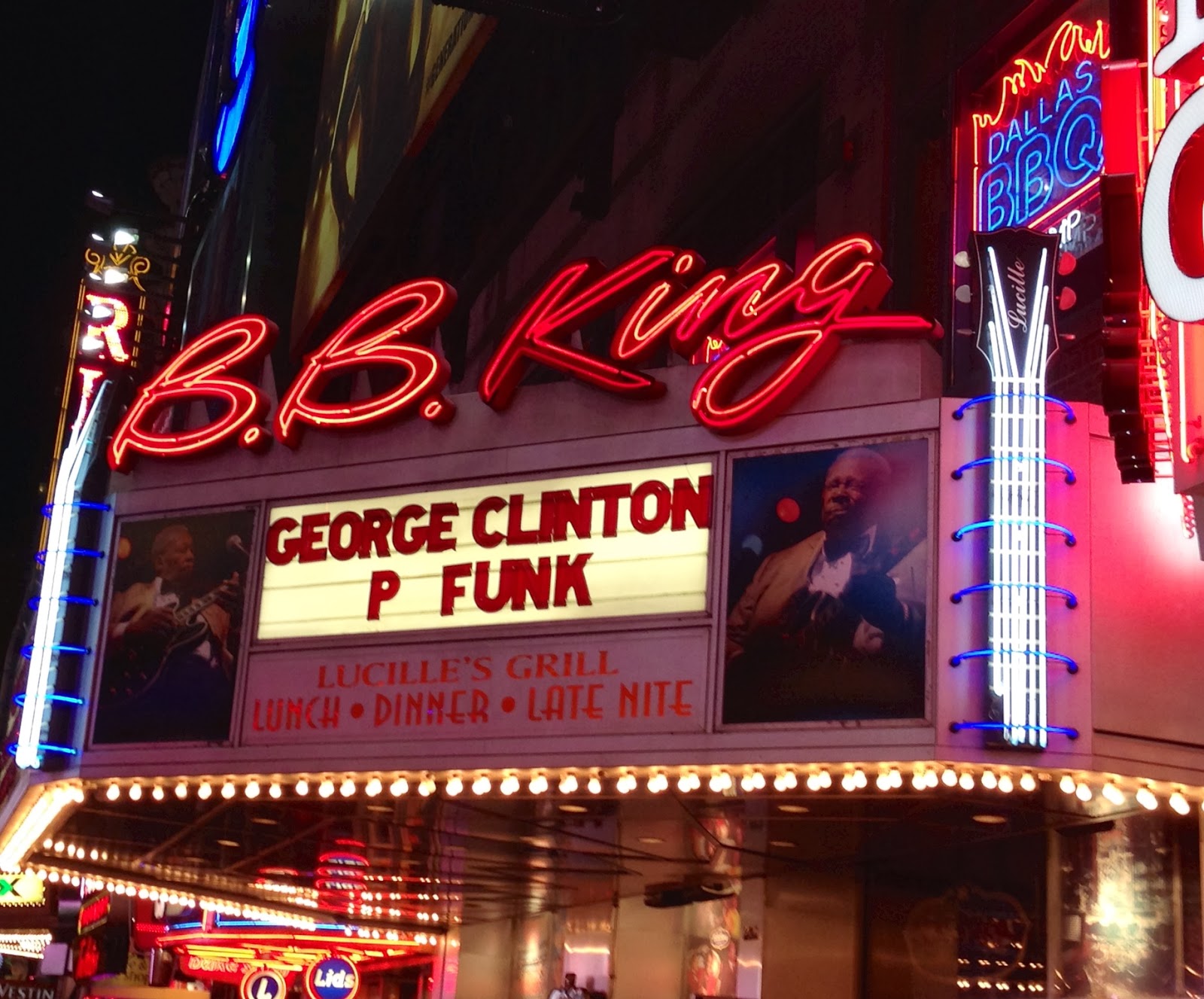 While the Beekman Beer Garden show in August was geared towards Funkadelic acid rock, the B.B. King's gig more closely resembled one of George's Family Series releases: a cavalcade of funkateers taking turns at lead vocals, backed by the mighty mob.  Clinton was onstage from the start, guiding the the band through "Standing on the Verge of Getting It On."  When they transitioned into "Pumpin' It Up," Bernie reappeared to comically towel off Michael Hampton during his guitar solo.  George had a ball on "Pole Power," a riddle chant reminiscent of "Butt-a-Butt," where he proclaimed, "What is a pipe but a pole with a hole in it?  A pole is pipe with no hole."  Kendra Foster came forth to sing "Bounce 2 This," and Ricky Rouse enlisted his mic stand as a guitar slide on a raging solo.  By then, Bernie had found his way into the keyboard corner just in time for "Atomic Dog."  Unfortunately, B.B. King's speakers are suspended from the ceiling, so the doggy ditty lacked the earthquaking bass that stopped hearts at Beekman.  However, that didn't stop the same dancing white guy from finding his way onto the stage yet again.  While "Flash Light" may have inspired Sir Nose to dance in the spotlight, a more inspirational sight could be spotted in the shadows, as keyboardist Danny Bedrossian earned some pats on the back from an impressed Worrell.  Mid-"Flash Light," George suppressed the band: "Wait a minute.  Hold it.  All the way down."  He took the opportunity to invite his granddaughter Sativa to the stage to perform her love letter to marijuana, "Something Stank."  She was hardly the only weed fan in the room.  Richie Nagan lit up a spliff that made the rounds stage left, and as George traversed the front of the stage, he took a hit from everything the crowd offered.  He puffed on a pipe, toked on a joint, and blazed on a blunt.  I half-expected to see someone hand him a bong.  The band may have been stoned, but they took no time to chill, revving up "Knee Deep" and giving literal meaning to the term after-burners.  My favorite P-Funk jams usually come out of the "Sentimental Journey" segue back into "Knee Deep," and this night was no exception.  I've dubbed the sound "melodicophony."  Everyone's soloing at once, so all these layers keep spewing out, but amidst all the anarchy, there's melody.  It's beauty in chaos, and it's why I go to P-Funk shows.  Then Mary Griffin came out to sing "Crazy," and the band proved they could also hit a groove's sweet spot, evident in the grin plastered on bassist Lige Curry's face.  But no one was smiling more than George.  Find me another 72-year-old who looks even close to having as much fun.

And if he was smiling then, you should've seen him next.  "This is my motherfuckin' idol coming out here now," Clinton said, ready to welcome Rakim to the stage.  "I'm like a little baby in a candy store right now," George gushed giddily.  Rakim wasn't ready, though, so George killed some time by having the band start up the newest Funkadelic song, "Am I Funking 2 Hard 4 U?"  Once Rakim emerged in his Yankee's cap, George silenced the band.  The backing track to "Microphone Fiend" played over the PA, and Rakim dove in.  The crowd's response was lackluster, but I think we all expected the band to be providing the music (Bernie and Bedrossian did add a little live flavor over at the keys.).  It was more a private concert for Clinton than anyone, but it was a joy to watch his excitement.  Rakim revealed that he grew up listening to his older brother's P-Funk records, specifically being taken by the strange lyrics.  "My words aren't as crazy as his," admitted Rakim.  "Bullshit," laughed Clinton.  Rakim was told that "Follow the Leader" was George's favorite, so he obliged, with George playing hypeman until Rakim dropped out completely, unexpectedly leaving him on his own.  "Hey, you know it better than that, dude bro," said Rakim.  "This is my debut," giggled George.  Rakim finished his mini-set with "Paid in Full."

While it was nice to see Rakim, it essentially derailed the show.  How would they get back on track?  Pandemonium.  They ignited the fiery Funkadelic noisefest "Alice in My Fantasies," with Bernie on lead.  Shifting gears halfway though, Bernie gave the audience a musical history lesson, demonstrating the links between "Burning Down the House," "Them Changes," and "Genius of Love."  "Everybody is related.  If you want to differentiate, that's your ass.  Your stupid ass," Worrell warned.  They catapulted back into "Alice," and Bernie left the stage smiling.  "Y'all gonna be seeing a lot more of Bernie Worrell with us from now on," pronounced George.  The "Thumpasorus" medley featured George's grandson Tra'zae rapping "I'm Dougie," followed by Tra'zae's father Trey Lewd providing a rap of his own.  It had been a long time since I'd seen "Mothership Connection," so I was itching for a ride, especially one with a tease of "Everything is on the One" and some nice crooning from Steve Boyd during the "sweet chariot" section.  As Garrett Shider began "One Nation," George said his goodbyes and waved to the onlookers.  Clinton and his caravan return to B.B. King's on March 4th to give us more of what we're funkin' for... hopefully with Bernie in tow.

SET -
Standing on the Verge of Getting It On > Good to Your Earhole (tease) > Pumpin' It Up > Bustin' Loose (tease) > Pumpin' It Up > Standing on the Verge of Getting It On > Get Off Your Ass & Jam (tease) > Pole Power* > Bounce 2 This / Atomic Dog > Free Your Mind & Your Ass Will Follow (tease) / Bernie Worrell Solo / Flash Light > Something Stank > Hard as Steel > Flash Light / (Not Just) Knee Deep > Sentimental Journey > (Not Just) Knee Deep > Rubber Duckie (tease) / Crazy / Am I Funking 2 Hard 4 U?* / Microphone Fiend / Aqua Boogie (A Psychoalphadiscobetabioaquadoloop) (tease) / Follow the Leader / Paid in Full / Alice in My Fantasies > Burning Down the House (tease) > Them Changes (tease) > Genius of Love (tease) > Alice in My Fantasies / Give Up the Funk (Tear the Roof Off the Sucker) > Bootzilla (tease) > Night of the Thumpasorus Peoples > I'm Dougie > Trey Lewd Rap* > Night of the Thumpasorus Peoples / Mothership Connection (Star Child) > Everything is on the One (tease) > Mothership Connection (Star Child) / Ain't No Party Like a P-Funk Party (tease) > One Nation Under a Groove > Cholly (Funk Get Ready to Roll!) (tease) > One Nation Under a Groove
at 2:13 AM