To celebrate the release of their long-anticipated live album, Live at a Flamingo Hotel, Dr. Dog announced a New York 4x4: four shows at Music Hall of Williamsburg followed by four at Bowery Ballroom.  Last night at Music Hall, they offered up a career-spanning third show, where the band touched on every LP and EP in their discography with the understandable exception of the holiday release, Oh My Christmas Tree.  The venue was decorated to fit the live record's theme, with strings of lights housed in small, colorful China bulbs dangling across the room from a balcony whose support beams had sprouted palm fronds.

Shortly after nine, the packed house turned their eyes to the stage for the opening act.  While Elvis Perkins' upcoming I Aubade is mainly a solo effort, he had no qualms about sharing the stage with his backup band, Dearland.  The audience had no problem either, when the group began their set in delightful four-part harmony.  Nick Kinsey's drums rocketed into "I Heard Your Voice in Dresden," with Perkins' whooping vocals complemented nicely by wafts of harmonium and trumpet.  "Stay Zombie Stay" coasted along on that springy rootsiness shared by so many Dr. Dog songs that anyone in the room not yet onboard hurried to the gangway.  A helping of flute and bowed double bass segued the number into "Shampoo."  If the imagery of lines like "Black is the color of a strangled rainbow" wasn't enough, the song was made all the more haunting by the choral moans of his bandmates during the hook.  Kinsey left his kit, strapping on a large drum to join the rest of Dearland center stage.  Perkins conferred with his band and quickly readjusted his tuning.  "That would've been a very interesting hybrid of a song from Ash Wednesday and a song from In Dearland at the same time, but..." he remarked, proceeding with the clap-inducing "Hey."  Perkins had even more fun with "Stop Drop Rock & Roll," a rockabilly ditty that could've been performed by his namesake.  The quintet finished off the set with a horn-filled "Doomsday."  When the members reappeared a few minutes later to retrieve their gear, the crowd cheered as if they were about to get an encore.

Backlit by a pink flamingo amidst blue geometric shapes, the shadow people of Dr. Dog took the stage.  A drone of low-end feedback was happily interrupted by the insistent bass line of "The Girl."  Scott McMicken tossed the lead vocals over to Toby Leaman for "Hang On," as the couple in front of me held hands and sang along contentedly.  "Love" was an early standout, its verses of slick cocaine funk erupting into the joyous refrain led by McMicken.  "The Beach" progressed like a spooky Bond villain theme, reaching peak wickedness when Toby ripped his mic from its clip and slithered across the stage, baptized in a crimson glow.  On "Too Weak to Ramble," Leaman loaned his bass to percussionist Dimitri Manos and picked up an acoustic guitar.  The ballad slowed the show's pace a bit, but "We All Belong" got things back on track with a big finish, Scott McMicken leading the harmonies into a blinding white light.  Their excellent cover of Architecture in Helsinki's "Heart It Races" featured a groovy, jammed-out coda, and with a helpful nudge from the lighting design, "Heavy Light" was the pot of gold at the end of the rainbow. 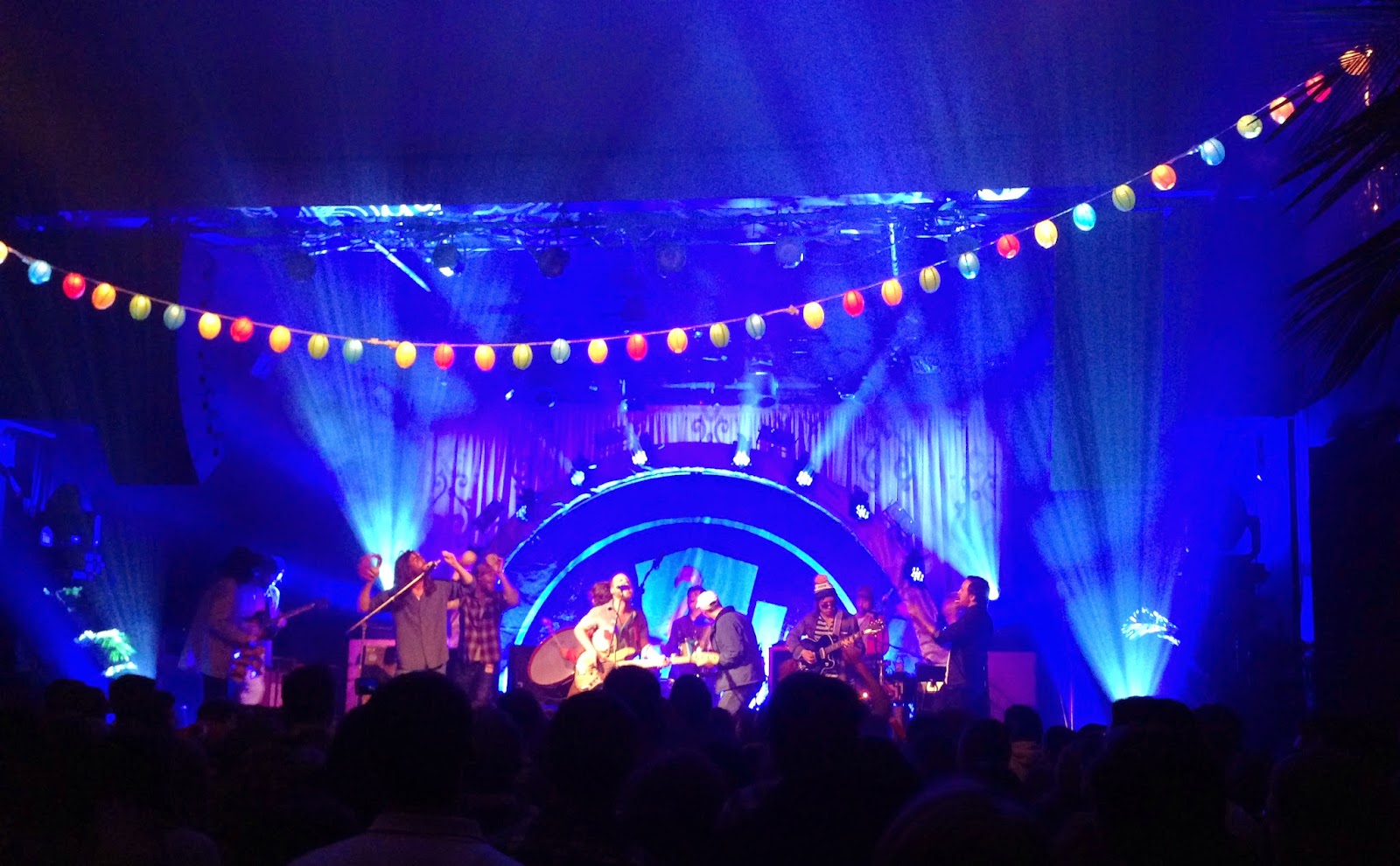 A hurricane overtook the Flamingo Hotel during the encore break, with thunderclaps of applause and balconeers shaking the lines of lights violently.  After nearly four minutes, Dr. Dog reemerged.  "Thank you so much, folks," offered Toby, and they plunged into "These Days," not wanting to waste any more time.  Keyboardist Zach Miller switched to electric guitar for "Today," taking the solo.  At this point, I was a little uneasy.  Sure, there had been some nice moments so far, specifically "The Beach," but they'd been playing it too safe.  Where was that riotous energy that their shows are known for?  The answer was next.  "Let's continue with Zach Miller on guitar.  Normally I can't stand that guy, but tonight, I don't know," joked Toby before inviting the percussion-equipped Elvis Perkins in Dearland to join them for "Lonesome."  You could finally see that they were having a blast, and as the house lights illuminated the room with every "hey," the crowd clearly was too.  Not to mess with a good thing, Dr. Dog kept Elvis and Dearland onstage for the final three tunes, "California," "Die, Die, Die," and an exuberant "That Old Black Hole."