Never mind the quality musicianship and songwriting; the banter alone was worth the price of admission.  Tonight's Robert Ellis and Jonny Fritz show at Rockwood Music Hall saw the pair of troubadours letting loose before they head to India to record Fritz's new album.

Robert Ellis took the stage first, accompanied by guitarist Kelly "the Tele" Doyle.  "We're from Houston," Robert informed the crowd, before correcting it to the pronunciation of the NYC street, "Houston, Texas I mean."  With minimal percussion from a tambourine by his right foot, Ellis captured the audience immediately with the admonitory "Only Lies."  At the song's end, Robert remarked, "I think I swallowed a mosquito.  Do you guys have mosquitoes in New York City?"  After downing a shot of whiskey, Ellis paused to pluck something from his tongue.  "It was a moustache hair.  You know what I'm talking about, guys.  Maybe ladies?  I don't know."  He continued with the pleading "Good Intentions."  "That one's about infidelity," he shared.  "You can ignore the line about my sister.  I have to explain myself when I come this far north.  I am not having sex with my sister."  "Anymore," quipped Jonny Fritz from a table down front.  "Anymore!" repeated Robert, rolling his head back to laugh.  Following "The Elephant in the Room," a tune about a struggling relationship, a request was shouted from the balcony for "A Good Year for the Roses."  A kindred spirit with "Elephant," this version was more George Jones than Elvis Costello.  Moving to the keyboard for new song "Maybe I'll Move to California," Robert cultivated that sexy '70s soul sound of a Rhodes electric piano.  Robert and Kelly took on Vern Gosdin's "Chiseled in Stone" next, though the drum machine's tempo seemed to hold them back from taking it where it wanted to go.  Doyle stepped offstage as Ellis invited Courtney Hartman to assist him on Richard Thompson's "1952 Vincent Black Lightning."  Robert praised the crowd for its quietness, stating, "I don't want you to change.  Never change."  Doyle returned and the duo embarked on "Sing Along," a bluegrass scorcher so hot that the tentative audience couldn't keep from clapping and stomping. 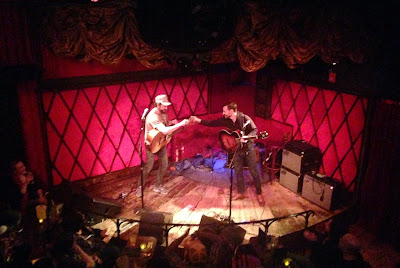 Sporting a tucked-in t-shirt covered in labrador retrievers and a trucker cap emblazoned with gold letters reading "Who's that playing?" Jonny Fritz joined Ellis on the Rockwood stage.  The two clinked glasses, Fritz announcing, "This is our last U.S. show before we die next week in India."  Following a few Fritz fan favorites like "Goodbye Summer" and the ode to a Murfreesboro truck stop worker, "Holy Water," Fritz unveiled a new number, "I Love Being Ready to Go."  Not only did it feature the opening line "All classical music is so clarinet-y / I love meatballs, but don't like spaghetti;" an expertly-timed "Dixie" horn honk from Robert on guitar was also a highlight.  Fritz performed "Stone Cold Daddy-O" stone-cold a cappella, and then he brought up Kelly Doyle for "Chevy Beretta" and "Fever Dreams."  Having spent most of Ellis' set silent, by now some people in the audience had gotten a little too comfortable with the laid-back vibe.  While Fritz introduced "My Humidifier" as a tale about Minneapolis, he was interrupted by a voice from the floor.  "Excuse me, I'm telling a story that does not matter," Jonny joked.  Crowdmembers began calling out requests.  Hell, it had worked with Ellis.  When "Night Rider" was echoed by a few people, Fritz said he would oblige.  "This'll be great," predicted a fan.  "Yeah, it might be alright," Jonny responded.  It went off without a hitch, so Fritz felt moved to play another new one, "Stadium Inn."  The ballad about a seedy Nashville hotel had the audience rolling with lines like "Brokeback Mountain playin' on the TV screen / Brokeback reenactment, room 213."  Clearly he'd written another keeper, as it fit right in with closers "Trash Day" and "Ain't It Your Birthday."  I can't wait to hear the Indian version.

I had a beer with Robert before the show for The Next Round, so be on the lookout for that.

SET -
Only Lies / Good Intentions / Steady as the Rising Sun / The Elephant in the Room / A Good Year for the Roses / Maybe I'll Move to California / Chiseled in Stone / 1952 Vincent Black Lightning (feat. Courtney Hartman) / Sing Along