ELO Play Their First NYC Show in Over 30 Years

"When I Was a Boy" is the leadoff single from Electric Light Orchestra's new record, Alone in the Universe.  The crescendoing ballad finds Jeff Lynne reminiscing about his time in Shard End as a child, listening to the radio and dreaming of a life in music.  We all know how that turned out.

When I was a boy, I never thought I'd be able to see ELO live.  Due to their breakup in the '80s, I deemed it impossible in a similar way that I'd never see Peter Tosh or Hendrix in concert, even though Lynne was still alive.  Fortunately for me and those lucky enough to procure tickets, I had my dream come true on Friday night at Irving Plaza.

When we arrived at Irving Place, the line was the longest I'd ever seen it, hugging the wall around the corner and halfway down 16th St.  Then again, I assumed most of the ticket holders were old enough to be retired and probably weren't coming straight from work.  As it turned out, some had come from much further locales, as I overheard a couple claim they had travelled all the way from Vancouver.  Eventually we slithered into the venue, grabbed beers for the wait, and found a spot on the packed floor to the right of the soundboard.

A baker's dozen of musicians (counting Lynne) took the stage to roaring applause.  They wasted no time at all, bursting into a joyous "All Over the World" from the Xanadu soundtrack, which I'm not too familiar with because I regrettably sold my father's LP when I was in high school.  I was definitely familiar with the next entry, "Evil Woman," which featured Jeff headbutting a smiley face balloon that had wafted into his sightline.  Not only did Lynne still possess his familiar mane of curly brown hair, his instantly recognizable voice was somehow miraculously untouched by time, whether slinking along the stanzas of "Showdown" or floating freely out of the falsetto refrain of "Strange Magic."  I found myself laughing hysterically into my date's ear as they delved into each essential song.  I was obviously not the sole smiler in the house, but even the bandmembers found themselves unable to suppress their grins, the string players beaming as they plucked out "Livin' Thing." 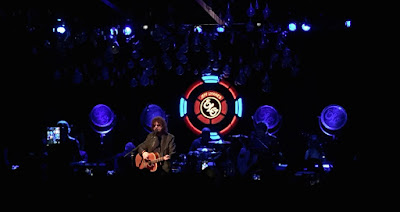 While most patrons weren't acquainted with the new numbers yet, thankfully they didn't dare talk over them.  "When the Night Comes" was actually superior to its recorded version, Jeff's vocals cutting cleanly compared to their processed predecessors.  At its end, Jeff announced, "Here's another one off the new album.  Sorry about that."  The crowd chuckled.  "It's good though," he offered, serving up the uptempo "Ain't It a Drag."  It was a little bit of a drag that he felt he had to apologize for the fresh tunes, especially when the band kept banging out hit after hit, including their biggest one ever, "Don't Bring Me Down."  My favorite performance of the night was "Sweet Talkin' Woman," with all parties on point, and Lynne crushing every "No, no, no!"  "Telephone Line" was a close runner-up, the crowd happily howling every "Oh!" in the chorus.  The band closed the set with fan-favorite "Mr. Blue Sky," veteran ELO member Richard Tandy tying things up with his vocoder solo.  Jeff thanked the crowd and exited the stage, leaving his twelve mates behind, foretelling an imminent encore.  After all, it would've taken awhile for everyone to file into the wings.  Lynne wasn't long, returning for a rollicking "Roll Over Beethoven" before taking his final bow.

Clocking in at eighty minutes, the show could've been longer.  That's not so much a complaint as an observation that none of the members, including the two sexagenarians, looked fatigued.  I just wanted the night to last forever I suppose.  I had the best time I've had at a concert all year.  It was everything I'd wanted it to be: a once-in-a-lifetime experience for this boy who never thought it would happen.