Cheerleader Graduate to the Late Show at Mercury Lounge 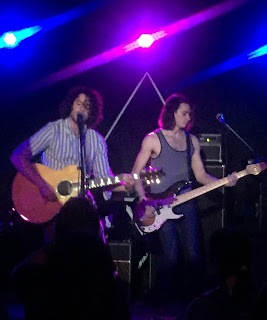 Philadelphia's hazy power pop band Cheerleader opened the late show last night at their most frequent NYC tour stop, Mercury Lounge.  "A Million Ways" is the single they're currently promoting, so what better way to do that than to open with its shimmery guitars and self-reflective lyrics?  They followed with a brand new song (the first of four) called "Draggin' Me Down," which marked a shift away from their nebulous patina and towards a crunchier pop/rock sound.  After a whistle-less "Do What You Want," bassist Paul Impellizeri addressed the crowd, "Thanks, guys.  We're gonna get a little weird."  Raising his plastic cup, he added, "Cheers to getting weird."  The weirdness manifested itself as a decaying spoken word intro to the second new tune of the night, "I Feel It Coming," which reassured fans that the band hadn't completely traded in their haziness for pop sheen.  Third newbie, "I'm Just Thinkin' It to Myself," was dedicated to headliner, Paperwhite, and Cheerleader made sure to leave the stage nice and toasty for them with a confident "Feel Like That," as guitarist Chris Duran jerked around in angular motions and drummer Carl Bahner bobbed his head and shoulders from side to side.

Don't miss the episode of The Next Round I recorded with them before the gig, and also, don't miss them when they come back through NYC, as I may open for them with some stand-up.