No Mirage, Band of Horses Rock

Those who pre-ordered Band of Horses' new album Mirage Rock from Insound (or RSVP'd online) were invited to a special gig at House of Vans in Greenpoint on 9/18, the day of the album's release.  Violent rain and wind threatened attendees to abandon the beer tent and go indoors, where they received a staggeringly good show, peppered with new tunes and brimming with old favorites. 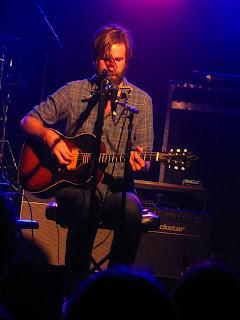 No opener was announced, but Band of Horses' guitarist, Tyler Ramsey, took the stage alone to warm up the crowd.  Beginning with a finger-picking instrumental that will be released on 78rpm by Tompkins Square, Ramsey silenced the room, aside from a slight buzz in the speakers.  After playing "The Valley Wind" and "1000 Black Birds," both of which had some great lyrics, he decided on "No One Goes Out."  His long fingers moved along the strings effortlessly, and the respectful crowd listened intently, causing Ramsey to remark, "Apparently people do go out," at the song's conclusion.  Ben Bridwell joined him on harmony for a cover of Cyndi Lauper's "All Through the Night" for his final number. 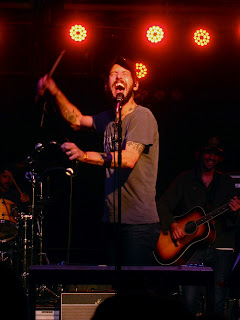 Just before 9pm, the music on the PA shifted to Milli Vanilli's "Blame It on the Rain" and the Band of Horses took their positions.  "We're gonna blame this show on the rain," suggested Bridwell, and they galloped into "The General Specific."  As the song came to its close, Creighton Barrett's drums kept pounding and the distortion from three guitars morphed into "Knock Knock," the single from the new LP.  All that knocking opened the door to "NW Apt."  "It's gonna be one long song," Ben joked, as they merged into "Islands on the Coast."  After that opening salvo, they didn't pull back, they pushed forward with their best tune, "No One's Gonna Love You."  Normally I'd say this would be too early in the set, but it being legitimately among my favorite songs of all time, I was immediately overtaken by emotion, almost in a daze listening to the soaring vocals and shimmery guitars.

Bridwell then paused to talk about the new album, specifically its shared release date with some of his favorite artists: "It's like a damn holiday for music lovers."  They eased their way into "Dumpster World," which started off with CSN-style harmonies and then abruptly plunged into a chorus of crunchy guitars and shouted vocals.  While the album will take a few more spins before I can give a real verdict on it, the new songs seemed to fit pretty comfortably into the setlist.  Bridwell dedicated "Marry Song" to his wife, who was celebrating her birthday, and he even fielded a request for "On My Way Back Home."  "That's a tough one.  Shit, I'll try it."  And it was mainly a success, despite one vocal flub and the fact that Ramsey either didn't remember how to play it, or more likely, didn't have a guitar tuned for it (Two guitar techs provided fresh axes in between every song.) and awkwardly slunk backwards without playing a note.  "Have we ever done that fucking live before?" Bridwell questioned with a smile. 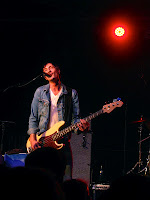 Without the distraction of video collages projected behind them like when I saw them at Hammerstein or at MSG opening for My Morning Jacket, you were free to watch them as solely a band.  And what was evident was that these boys love playing music.  Ben sang with such gusto, you could witness the veins bulging in his tattooed neck.  Every member had a wide grin for the show's duration; even the typically stoic Ramsey sneaking out a smirk from somewhere in the center of his beard.

They ended the set as they started it: with a medley, this time "Wicked Gil" to "Ode to LRC" to "The Funeral."  They thanked the crowd repeatedly and went backstage.  A few minutes later, they returned for an encore of the first BoH song I ever heard, "Detlef Schrempf," and the title track from Infinite Arms.  "This has been so fun.  It shouldn't be this fun," Bridwell pronounced.  He then corrected himself: "It should be." 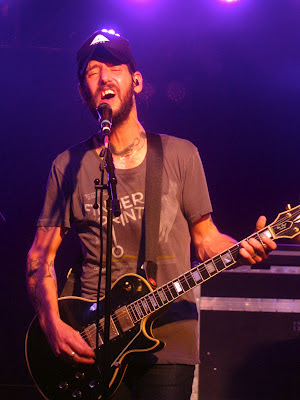 SET –
The General Specific > Knock Knock > NW Apt. > Islands on the Coast / No One’s Gonna Love You / Dumpster World / Cigarettes, Wedding Bands / Electric Music / Older / The Great Salt Lake / Is There a Ghost / Marry Song / Slow Cruel Hands of Time / Laredo / On My Way Back Home / How to Live / Wicked Gil > Ode to LRC > The Funeral