Matt Embree (of Rx Bandits) and Vinnie Caruana (of I Am the Avalanche) sold out Mercury Lounge for one of the last stops on their summer acoustic tour.  Each frontman played a solo set of songs from their various projects, and announced a secret Brooklyn show for next week.

Those who arrived early were treated to a short set by Lauren Coleman, singer for Pebaluna, a new band that features Embree (Album Carny Life drops 9/18.).  Accompanied only by her ukulele, her sultry voice sang songs of becoming rich and an island where parrots open your beercans.  Coleman's tunes, with her jazzy delivery, playful lyrics, and gentle strums, recalled those in movies from the '50s where everyone stops to watch a musical number.  I was trying to think of who her voice reminded me of, but I couldn't quite place it.  When I got home, I discovered she's the female character in one of my favorite songs: Gavin Castleton's "Coffeelocks."  Mystery solved. 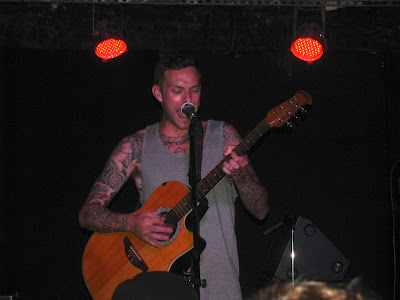 Vinnie Caruana (rhymes with marijuana) put down his beer and picked up his six-string to open with "Symphony."  His voice has improved so much over the years, his guttural growls awed the crowd into silence.  When the song ended, he launched into the first of what would be several extended railleries: "That song's a downer.  'Why did he start with that?'  There's more where that came from."  "I'm from Long Island and I'm in a band called I Am the Avalanche."  Cheers from the crowd.  "You guys know that island and that band?  Sick."  After another IATA classic, we got Vinnie solo staple "To Be Dead & in Love," which he said would be on a solo release to be recorded during the winter months.  "I was in a band called the Movielife."  More cheers from the crowd.  "The magazines say we were an influence to the young'uns.  And we made way less money than them."  Movielife tunes "Hey" and "Sailor Tattoos" had most of the crowd singing, and one drunk guy on the right side of the room yelling.  Caruana took time to thank Lauren Coleman, revealing, "My father already likes her music more than mine."  Vinnie's parents were in the crowd, which made the father-themed closer "Brooklyn Dodgers" all the more poignant. 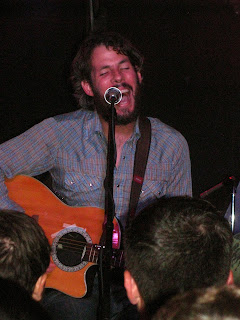 Matt Embree took his place on a stool center stage a little after 9pm.  He kicked things off with "Bring Our Children Home," the first of five Rx Bandits songs for the evening.  The crowd joined in for the triumphant chorus, and for a moment, things were great.  But as the night progressed, the drunk on the right shouted more and more, and audience members came together to shush him.  After the incendiary Love You Moon track "To Kill for You," Embree eased his way into Sublime's "Pool Shark."  A surprising cover of Neutral Milk Hotel's "The King of Carrot Flowers (pt. I)" came next, and was promptly followed by the highlight of the night, "Taking Chase as the Serpent Slithers."  Everyone in the crowd seemed to know the words, and helped Matt through the song's bridge.  He admitted afterwards, "Whenever I play with Rx, I just make shit up."  A faithful cover of Hendrix's "The Wind Cries Mary" came later, the inebriate on the right barking, "Mary!" throughout.  A bluesy interpretation of Sam Cooke's "Bring It on Home to Me" was similarly marred by the asshole.

When punk musicians go acoustic, their fans generally don't know how to adapt (Well, at least no one moshed.).  It's fine to scream at the top of your lungs when it's drowned out by distortion and drums, but it's a completely different story when the artist is alone and unplugged, even if they're encouraging you to sing along.  Add in the fact that most punk fans can't carry a tune and you've got yourself one nasty situation.  This culminated when Lauren Coleman stepped on the stage to duet "A New World" with Matt sans microphones.  Please please please let the band sing when they're not using mics.  RXB standard "Overcome (the Recapitulation)" finished it out, along with the announcement that Vinnie and Matt have added a special final tour stop: Tuesday 9/11 at the Acheron in Bushwick.  Tickets are $10 at the door, and the guys promised to change up the setlists.  I'll be there if you shut the fuck up, and if I can figure out how to get home. 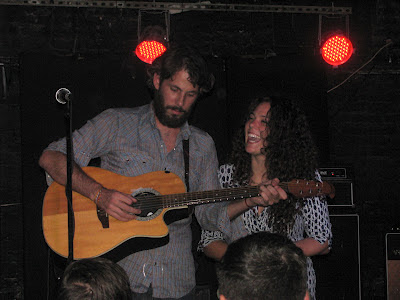 SET –
Bring Our Children Home or Everything is Nothing / To Kill for You / Pool Shark / The King of Carrot flowers (pt. I) / Taking Chase as the Serpent Slithers / David’s Birthday / March of the Caterpillar / The Wind Cries Mary / White Lies / Bring It on Home to Me / A New World (feat. Lauren Coleman) / Overcome (the Recapitulation)
at 3:04 AM