The Heavy Give Irving Plaza a Glorious Show

Music is great to listen to on vinyl or the radio or your iPod, but it's meant to be heard live.  Going to concerts has been a passion of mine since my very first one, almost twenty years ago.  I love live music, and I want more people to hear what I'm hearing out there, which is why this blog has become so focused on concert reviews recently.  If you solely listen to the recorded output of an artist, you're experiencing only one facet of the band.  And as evidenced from last night's show by the Heavy at Irving Plaza, the energy of a live performance can not only improve the songs, it can create euphoria.

Fresh off a spot at Afropunk Festival, the Skins opened, and I had a chance to check out their Bandcamp page before the show.  Made up of three siblings and their two friends, the Skins are decidedly influenced by '70s hard rockers Black Sabbath and Led Zeppelin, both of which they covered at Irving, including the set-closer "How Many More Times."  The androgynous, multiethnic teens that make up the band could have been extras on Skins, and I didn't realize how young they were until they took the stage.  So young that they attempted to lead a chant of "Hide your wife, hide your kids" from "Bed Intruder Song"... without irony.  "Do you guys like Kanye West?  'Cause we do!" shouted lead singer Bayli Mckelthan before they launched into a cover of "Mercy."  While I can't stand Kanye, it was at least interesting to discover this other side of the band.  The in-between-song banter needs improvement ("I would like do something with all of you guys," said Bayli on the attractiveness of the audience.), but after doing a little more research, I found out that the drummer is only 14, so they are literally children.  In a few more years, they could be a force to reckon with if they don't all go to different colleges.


On record, British rockers the Heavy are a strange brew of the Black Keys, marching band, old soul, and horror movie soundtrack, with most of their lyrics focusing on the macabre.  But when performing live, the group unleashes their inner animal (likely a wolf), infusing their style with so much moxie, all the songs can be heard in a different light.  They were actually the first band David Letterman ever asked to perform an encore on his show. 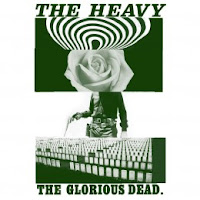 The quartet took the stage with its crew swollen to incorporate a keyboardist, four backup singers (two male, two female) from Georgia, and introduced as the Dirty Three, a three-piece horn section including Dap-Kings trumpeter Dave Guy.  The audio from the trailer of '60s monster film The She Beast crackled out of the PA, signaling "Can't Play Dead," the first of many tracks to be played off their new album, The Glorious Dead.  Impish lead singer Kelvin Swaby's suit jacket stayed on for exactly one song before he stripped down to a wifebeater.  After charging through some older tunes like the reggae-tinged "Cause for Alarm" and the spaghetti western-inspired "Short Change Hero," Swaby informed the crowd he wanted to play some more songs from The Glorious Dead.  "Curse Me Good," the LP's most melodic number, started the sequence.  A live staple for years, "The Big Bad Wolf" followed it like Little Red Riding Hood, but this wasn't the sneaky trickster from the children's tale.  This was a fucking monster.  With the crowd howling and screaming, "What you say!" it was incredible to realize that I was in a room full of adults singing along, "I'm gonna huff and puff, and blow your house down!"  It was going to be hard to top it, so Swaby walked us through a dry run of the lyrics to the new single, "What Makes a Good Man?"  And then they completely killed it!  The shriek of the horns, the propulsive drums, and the combined shouts of the crowd and backup singers took this one to a whole new plain.  It was during this song that I realized this might've been the loudest concert I've been to in years.

Swaby instructed the crowd for "Same Ol'" next, but may have taken the whole singalong act too far when he wanted us to sing back the words of a song that didn't make it onto the record, "A Lesson Learned."  His banter was that of a cocky person who feigns insecurity: "I'm feeling like New York City loves the Heavy, right?"  While this got old fairly quickly, no one seemed to mind.  Looking around me during the show, everyone was grinning the whole time.

For the encore, the original quartet performed "Girl," a mostly spoken word piece in which Kelvin proposed, "I think all the girls at the Irving Plaza should come back to our hotel room for some tea."  After a useless "Happy Birthday" dedicated to the keyboardist, the band started vamping while Swaby parted the crowd down the middle like Moses, only to do a "Which side of the room is louder?" shtick like at a Universal Studios stunt show.  This didn't accomplish much except to reorganize the crowd before the final song of the night, "How You Like Me Now?"  Used in several commercials and TV shows, it's the song everyone knows, and the crowd went buckwild.  At the song's end, Swaby expressed his gratitude and said, "You made me bust out my ass and everything," revealing that the seam on the back of his trousers had split wide open.

They missed out on an opportunity by not selling any merch.  I would've bought every album on vinyl.  But it's not about the records; it's about the live show.  I stepped out onto Irving Place with my ears ringing and my vocal cords stretched, recalling the concerts I attended when I was the age of the Skins.  So get out there and see a show.  You owe it to yourself to smile for over an hour straight.