First in a Pair of White Denim

White Denim played their first night of a Monday-Tuesday run at Brooklyn Bowl to a crowd of curly-haired whiteboys.  After having my coworker talk my ear off about them for weeks, he offered me a ticket to the show.  I definitely liked them more than I thought I would, but I'm still not a diehard like most of their fans.  They play rock music, but within that genre umbrella, incorporate several styles from prog to garage to country.  While some would consider them a jam band due to their songs usually flowing seamlessly into each other, they subvert that classification as well.  Their playing seems too calculated to be jamming, making them not spacey enough for drug-taking and fairly un-danceable.  So what do White Denim fans do at a concert?  They stand there, bob their heads, and wait to see what song will come next in the medley.  They are a jam band for people who don't like jam bands.  In other words, they could be way more fun. 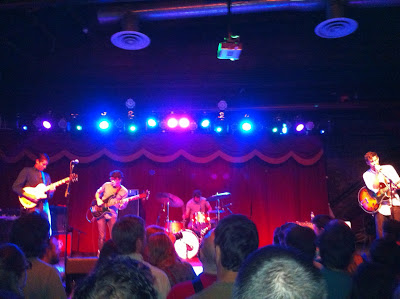 What it comes down to is engagement.  Bands are best when they are connecting with each other and the audience.  Unfortunately, the members of White Denim spent too much time watching themselves play their own instruments instead of looking around to see where the journey could go.  When they did make eye contact, the most inspired music flowed out.  Aside from guitarist Austin Jenkins, who is the newest member of the group, the other members rarely smiled.  There is such a spirited energy that comes off a band when you can tell that they're having a good time.  I found my eyes drifting to Jenkins for much of the show for this reason.  The members of White Denim don't solo much.  They play like a math equation, constantly reciprocating each other as a unit, so there aren't many times for them to feel the appreciation from the crowd, especially with so few breaks.

If it sounds like I'm trashing the band, I'm not, and I'm sorry if it comes across that way.  When I listened to samples of the band that my friend played me, I was not impressed by singer James Petralli.  Seeing him live changed that for me.  At his best moments, he recalled Dan Auerbach.  At his worst, he was still much better than the snippets I had heard before.  The musicianship was excellent, and the guitar tone on "Keys" even reminded me of the Grateful Dead.

I bought D on vinyl after the show, considering they played every song from it.  When I get some time to drop the needle, I want them to assuage my doubts.  As with any band, I hope that I can become a dyed-in-the-wool fanboy... enough that not going tomorrow night would devastate me.

ENCORE –
Mess Your Hair Up

(As I mentioned, I don't know much about White Denim, so I'm pretty sure there was a song between "Anvil Everything" and "Bess St." that I missed.  Any help is appreciated, especially if I forgot something else too.)
at 3:01 AM