Last August, Hurricane Irene rained out the Afropunk Festival at Brooklyn's Commodore Barry Park.  This year, the weather was absolutely perfect, and I was able to make it for most of Sunday's lineup.

I arrived at the park just in time for Gordon Voidwell's set.  Dressed in three different floral patterns, the sunglassed Voidwell laid down some Prince-inspired vocals over the electronic funk of his band.  While the Prince comparisons are justifiable, Voidwell has an undeniable talent for amalgamating different genres into his songs so smoothly, you don't even notice what he's doing.  I'm pretty sure he even snuck a cover of One Direction's "What Makes You Beautiful" into his set without anyone catching it (Correct me if I'm wrong.  I googled lyrics when I got home, and only One Direction came up.).  Though his keyboardist was stuck in traffic for most of the set, she was able to make it for the final song, "Ivy League Circus," which I've probably listened to 7 times today, not including the live rendition.  You can hear it on his Voided Checks mixtape, and be sure to check out his latest Cody Chesnutt-reminiscent mixtape, Malcolm XXX McLaren. 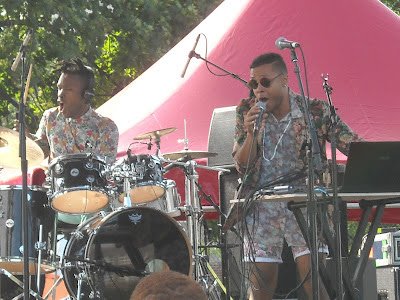 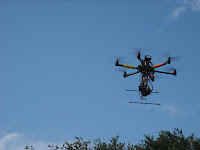 After Voidwell, I ventured across the park, through the pushy activists ("Sign this!"), to the skatepark and other stage, where Bad Rabbits were playing to quite a large group of fans.  While I wasn't exactly loving the music, the singer impressed me, his voice alternating from George Clinton bark to Maxwell caramel, often within the same couplet.  I was distracted during most of the set by a remote-controlled camera that was flying through the air on six propellers.  It seemed like a neat, cheaper alternative for aerial shots than renting a crane or (eek!) a real helicopter.  That is, until it crashed and fell on an innocent crowdmember, whose back was sliced to shreds.  I bought the Bad Rabbits CD for $5, and flipped it over only to be disappointed that Travie McCoy was featured on a track.  (That loser and his band didn't even have the nerve to show up for their 6:20 slot.)

I went back to the main stage where Body Language were playing.  Supposedly, it's important to pay attention to body language... unless it's a shitty band.  I decided to grab a lemon poppyseed donut from the Bed-Stuy-based bakery Dough.  To drink alcohol at Afropunk, you had to stay penned in an area where you could not see either stage, so I just bought a water from the vendors with a sign reading, "Every time you tip, a Justin Bieber fan dies."

Reggie Watts was up next and I got a good spot in the center.  The actual show started at 5:46, but Reggie entertained the crowd while setting up, miming the keyboard parts to "Love Will Tear Us Apart" and "I Just Can't Get Enough" as they played over the PA.  Technical issues prevented Reggie from creating his first loop, so he performed a song at his keyboard while the stagehand attempted to fix the problem.  He returned to his looping station, only to find it still fucked up.  "Let's do a diagnostics," Reggie offered to the sound team, walking them through each pedal and getting laughs.  Discovering that the mic stand made a sound when moved, he banged it on the stage to create a beat for his next number.  Going to what he called "Plan Z," Reggie hooked up his system in the simplest way he could, and the sound was fine for the rest of the set.  Most of his songs' lyrics drew from the tech mishap, including the difference between a passive and active DI unit.  When a nearby ambulance impeded a song, Watts seamlessly added the words, "And the sirens at your back," like a pro.  "May this night be the greatest of your life," he sang in the final tune. 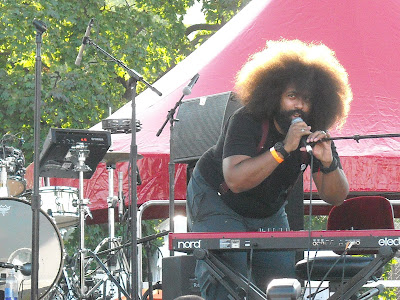 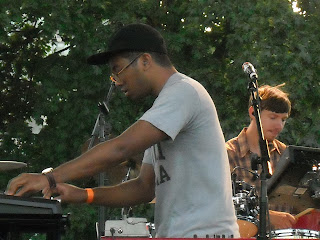 My location was so prime that I decided to stay put for Toro y Moi.  While I was surprised to find their music tolerable, they were completely lacking in stage presence.  That didn't stop the bearded fan with the shaved head, save for a pizza slice of curly hair, from going HAM on every song.  (Side note: Afropunk Festival could also be called Crazy Hair Festival.)

After seeing TV on the Radio for the first time at Catalpa, I was pumped to see them again.  And this time: fourth row, center.  W. Kamau Bell introduced the band, and they walked onto the platform.  "Every beautiful person in the borough is here right now," claimed Tunde Adebimpe.  "Every ugly person in the borough is here right now," added Kyp Malone.  "Every fair to midland person..." Tunde laughed.  The jokes stopped there, and they detonated "Halfway Home," complete with trombone blasts from the Christlike (in appearance) Dave Smith.  The song, followed directly by "The Wrong Way," whipped the crowd into a frenzy that would remain feeding for the entire performance.  I can't wait until they finally release a live album because their wall of sound approach is so drastically different from the delicate nuances you'll find on their records.  They closed with "Wolf Like Me," Malone playing guitar with a towel over his head.  I didn't expect an encore because it was 9pm, but they came out and dedicated "Satellite" as "a song for Brooklyn." 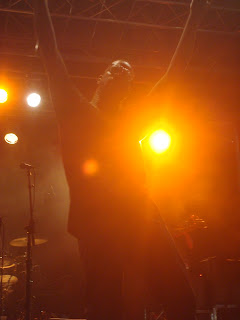 While it wasn't the greatest night of my life, it was certainly a fun time.  My $5 donation at the gate was earned, and I am excited to see what's in store for Afropunk Festival 2013, barring any hurricanes.


(If you think the setlists have any errors, as always, please let me know.)