Sharon Jones & the Dap-Kings treated a hometown Brooklyn crowd to funky free show at Williamsburg Park on Saturday night.  Afrobeat-revivalists Antibalas and the Latin funk of the Electric Sound of Johnny Arrow were perfect appetizers to the main course: different flavors, but complementary.

I showed up about a half-hour before doors to take my spot in a line of maybe a thousand people.  My friend and I grabbed a nice spot in the center and sat upon a cloud that felt a lot like concrete.  A minute after 6pm, the Electric Sound of Johnny Arrow took the stage.  Led by the Dap-Kings' baritone sax player, Cochemea Gastelum, and filled out with various members of both the Dap-Kings and Antibalas, the Electric Sound crafted some Latin jazz-inspired grooves that travelled easily on the summer breeze.  The band played 44 minutes of what Gastelum repeatedly stressed was original music.  Someone must've gotten on his case about being too derivative.  Having very limited knowledge of Latin jazz, I didn't hear anything I'd heard before, but oh well.

Keeping the majority of instruments onstage, there was a quick turnover before Antibalas.  Opening with "Dirty Money," the single off their brand new self-titled album, the band laid down a churning chowder of Nigerian funk for face-painted singer Amayo to shout his cautionary lyrics over.  With a 7-piece horn section that included the Daptone Horns, they followed with two more new tracks, "The Rat Catcher" and "Him Belly No Go Sweet," before launching into one of the best live Marley covers I've ever heard, "Rat Race."  Antibalas stripped the song of its reggae properties, and like Marcus Garvey, took it back to Africa for a fiery Afrobeat version.  Serving as the pit band for Fela!, the members of Antibalas are no strangers to the music of Fela Kuti, and excited the crowd with their take on "Opposite People," a song not in the musical.  Amayo remarked that real Afrobeat to him "makes me want to rip my clothes off, get naked, and dance."  While both he and the crowd remained clothed, there was no doubt in anyone's mind that this was real Afrobeat.  They dedicated the show to Pussy Riot and another pussy, a recently departed cat named Igor. 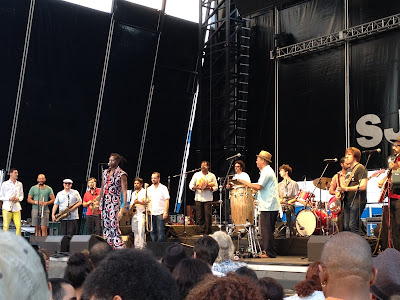 While the concert could've ended there and still impressed everyone, the sparkly letters on the backdrop that had been taunting us all night, "SJDK," foretold of a headliner that always commands the crowd's full attention: Sharon Jones & the Dap-Kings.  The suited members, many of whom had been seen earlier in the evening, took their places and started pumping out the shuffling introduction music as Binky Griptite stepped up to the microphone.  After leading the group through Dyke & the Blazers' "Broadway Combination," Binky welcomed the Dap-Ettes, Saundra Williams and Starr Duncan, who flaunted their vocal talents with covers of "You Can Run But You Can't Hide" and "Stop."  Based on range alone, either woman could front the Dap-Kings, but only one woman has the attitude necessary to get what she wants from the boiling funk of her band and the audience, and that woman is Sharon Jones.

Jones tried to sneak onto the stage from the right side, and even though she's small, her canary yellow dress ("I call this dress Vitamin C.") gave her away.  But of course, it's all part of the show that is a Sharon Jones concert.  I've seen Sharon Jones three times now (All for free I might add.), and while I knew the show would be a fun time, I was worried that it would fall into scripted territory too easily.  But releasing Soul Time!, a collection of rarities, earlier this year, refreshed the setlist, as well as the addition of three new songs to be featured on an upcoming album.  Sure, the requisite dance lesson in "When I Come Home" was there, but Jones skipped the usual pull-a-good-looking guy-from-the-crowd-to-sing-to-on-"My Man is a Mean Man"-bit in favor of coaxing solos out of each bandmember.  With both the touring and session bands onstage, it took a while to get through the extended Dap-King family, but it never got boring. 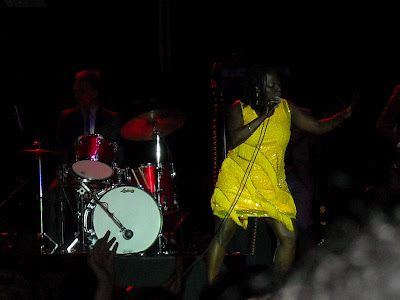 Some slight missteps were a not-so-memorable cover of "I Heard It Through the Grapevine" and new song "Calamity," which steals its phrasing from "I Will Survive."  However, an awesomely drawn-out rendition of "100 Days, 100 Nights" made up for it and stole the show, Jones admitting, "I don't wanna go.  That's why I'm trying to stall on this song a bit."  But the curfew prevailed, and Binky Griptite began his outro, Sharon dancing her way offstage.

With musicians shared between groups and their relatives watching just offstage (including little ones in hearing protector earmuffs), it was clear that Daptone isn't just a label, but a family.  The multiethnic bands of Daptone Records, with members of varying age, prove that music can unite people.  The multiethnic audience, with members of varying age, proved that.