Despite a myriad of technical difficulties, Maxïmo Park put on the best show I've seen this year last night at Gramercy Theatre.  While the Newcastle band played a whopping 10 out of the 11 tracks from their latest Too Much Information, they interspersed the tunes with fan favorites from their previous four albums.

I first discovered Maxïmo Park in 2005 as an opening act, so I made a point to check out opener Jeffrey Lewis & the Jrams.  Lewis began with "When You're by Yourself."  His flat vocals coupled with the rudimentary musicianship of the Jrams wasn't really doing it for me, but I paid attention, as I could easily relate to the song's lyrics about dining alone and having to take your backpack to the restroom with you.  "Time Trades" careened into
"Important for Me," the most punk-sounding of Lewis' numbers, which had him shouting over discordant blasts of guitar.  Lewis is also an artist (The merch table was blanketed with issues of his comic books.), so the next song found him flipping through the pages of a homemade storybook, singing the tale of the French Revolution to a rhythm supplied by the Jrams.  His ode to a neighbor with night terrors recalled a sped-up version of Weezer's "Island in the Sun."  He followed that with a poem entitled "WWPRD" (That's "What Would Pussy Riot Do?").  I was amazed at how respectful the crowd was as he delivered the spoken-word piece, especially as the message took a sudden turn into the dangers of selling out.  Lewis squinted a lot as he spoke, and while I'm sure he believes his words, he looked more like he was painfully trying to remember them than profess them with conviction. 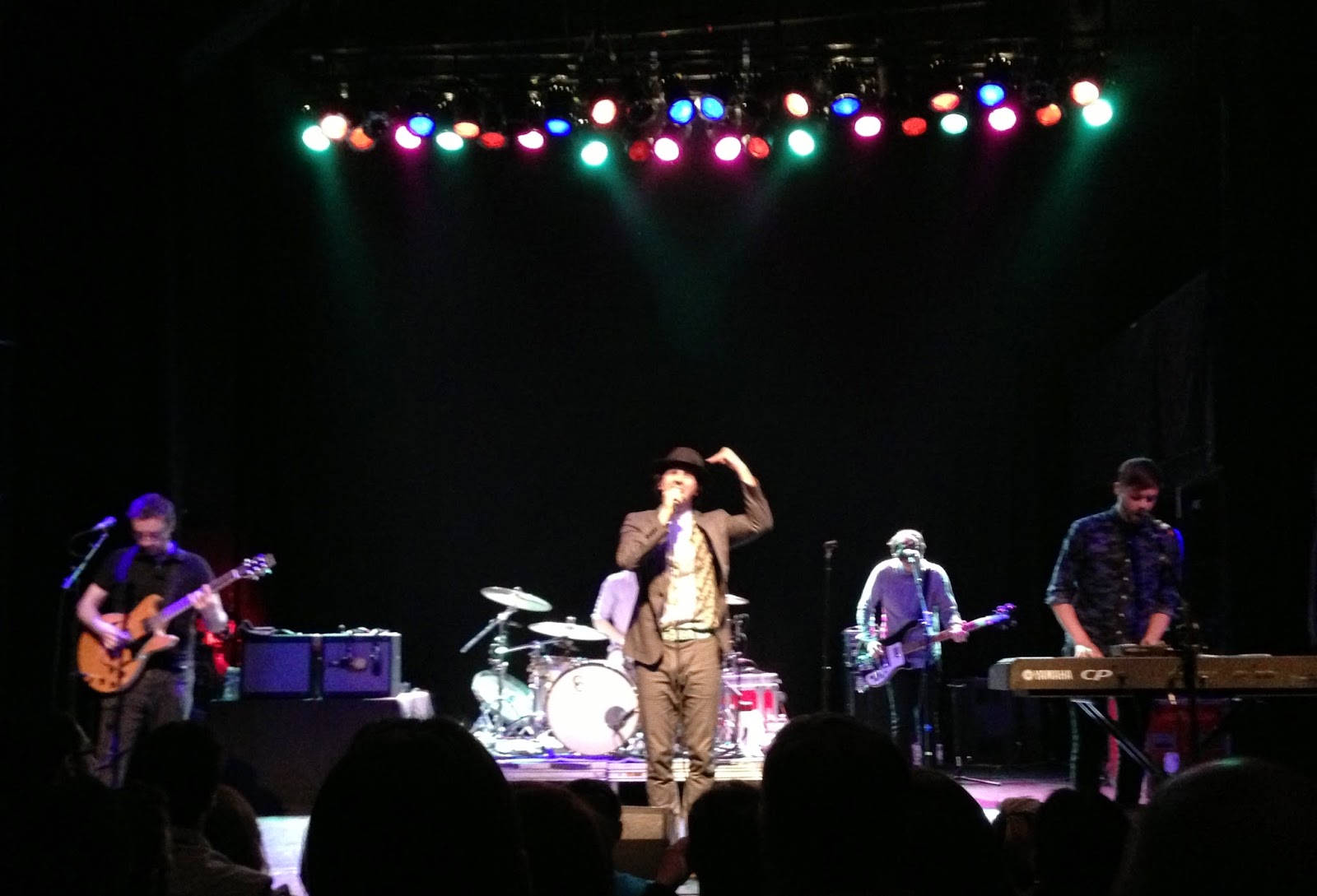 Maxïmo Park were supposed to go on a little after 9:30, but the sound techs moving about the stage with confused faces foreshadowed a later start time.  Twenty minutes later, the stage manager signaled with his flashlight, and the room went dark.  The band emerged, starting the set as they do on TMI, with "Give, Get, Take."  Despite Paul Smith revealing afterwards that he had heard the band Chicago in his in-ear monitor during the entire song, it was a great entrance for the band.  They followed with my favorite MP tune "Our Velocity," and it blew the roof off the place.  Duncan Lloyd opened the song up with a guitar solo, and Lukas Wooller garnered cheers with a slightly different keyboard breakdown, not to mention his trademark half-jumping jacks.  After three more uptempo rockers, the moody electronic "Brain Cells" came a little out of left field for much of the crowd.  The Park snatched everyone back up with "Hips & Lips."  Paul Smith's antics as a frontman, which include exuberantly jumping around and acting out the lyrics would be utterly ridiculous if not for the fact that the music is so infectious.  Sort of like how you forgive Mick Jagger for his peacocking because the Stones are so good.  Smith commandeered a megaphone for "The Kids Are Sick Again," the night's only entry from Quicken the Heart, but sadly, the bullhorn malfunctioned at the start.  The propulsive "Leave This Island" was one of the best-received new tunes, so it was a particular shame when the house sound completely shut off halfway through it.  The band played a few more bars, hoping it would fix itself, eventually petering out when they realized it wasn't going to.  "This has never happened before," admitted Paul.  "If we had an acoustic guitar, we would play for you, but we left it in England."  If it came to it, I hoped Jeffrey Lewis would offer up his six-string, so they could finish their set.  I was genuinely worried that that would be the end of the show.  They decided to take an intermission to try to resolve the issue.

Within a few minutes, they got the okay to return.  While "Books from Boxes" is a great song, they probably should've chosen something with a higher octane to reclaim the stage.  The energy in the room faltered for the next couple songs, but "Limassol" got everyone back on the same page.  "This is a punk song.  Even though punk is very much dead," announced Paul prior to "Her Name Was Audre."  Sensing some resistance from the audience, he continued, "It's only dead in kind of a historical way."  "Quit taking the piss!" someone yelled from the crowd.  "Get this man to a toilet forthwith!" Smith shot back.  There were a few dropouts during "Audre," but they were brief one-second pops that the band didn't draw attention to.  "Apply Some Pressure" was the second set highlight, the room shouting back each "Start all over again!"  They wrapped things up with the nocturnal crescendo of "Midnight on the Hill."

The band came back for an encore, beginning with the Phil Spector-inspired "Where We're Going."  Even that wasn't immune to issues, with Smith's mic crackling on the first line.  Although he realized he could've kept it to himself, he also confessed that he could not hear Lloyd's guitar for the whole song.  "This is not just a rock and roll show.  We explain things.  We go behind the mask," Smith informed the crowd, further comparing it to a tour of the Parisian sewer system.  And if you didn't know where they were going, it was "Going Missing," which had the room wildly clapping and singing along to finish the show on a high note.  If so much can go wrong at a concert and it's still that good, the band must be doing something right.

I interviewed Paul Smith before the show for The Next Round, so if you want to find out why he dances so crazily, check back in a few weeks.

SET -
When You're by Yourself / Time Trades > Important for Me* / The French Revolution / Support Tours* / Stop the Torture, Old Man* / WWPRD / Painted Into a Corner

SET I -
Give, Get, Take / Our Velocity / Signal & Sign / The National Health / My Bloody Mind / Brain Cells / Hips & Lips / A Fortnight's Time / The Kids Are Sick Again / Graffiti / Lydia, the Ink Will Never Dry / Leave This Island