Primus Only Play Six Songs at the Greene Space 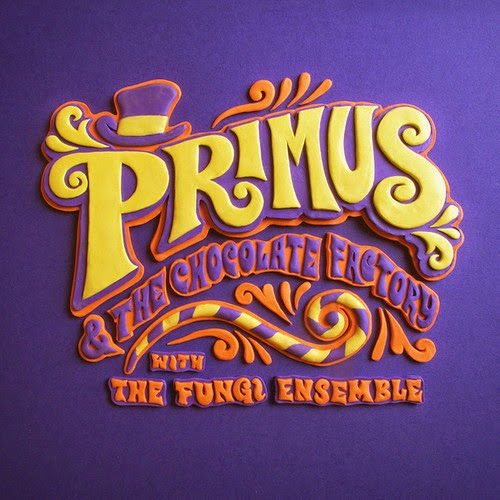 "It's not your normal score to Willy Wonka.  It's Primus, so it's more of a Tim Burtony…"  I'll cut John Schaefer, the host of WNYC's Soundcheck, off there.  I should have seen the bad omen in his introduction.  Les Claypool has only said in every interview about Primus & the Chocolate Factory that part of his motivation in recreating the soundtrack was his distaste with the 2005 Burton remake, going as far as to compare it to feces.  I'll be the first to admit that was what intrigued me most about the cover album, considering I haven't listened to Primus that much, even though I appropriated their "Primus sucks" slogan for my Twitter handle.  But I do think the Johnny Depp version is fucking garbage, so I was onboard immediately.

About 100 Primus fans, some dressed in various Wonka-inspired getups, crowded into the small Greene Space, anxiously waiting for the band to take the prop-candy-covered stage.  The band emerged to cheers and proceeded immediately with their creepy take on "Candy Man," Claypool pausing dramatically before each utterance of the sweets purveyor's name.  The reunited Primus lineup was expanded by the Fungi Ensemble of Mike Dillon on percussion and Teddy Parker on cello.  Dillon's vibraphone solo on "Golden Ticket" was the clear winner for musical highlight, although Larry LaLonde's guitar work on "Pure Imagination" was a close runner-up.  Tim Alexander's drum hits transitioned out of the song as two dancers donning giant Oompa Loompa heads emerged from stage right.  They bobbed up and down to the version that occurs right after Mike Teevee meets his Wonkavised demise.  It seemed a little strange to me to be playing that verse first.  Then the lights came up and Schaefer returned to the stage.  Okay, a short interview.  I get it.  But then they did something that was as giant a waste of time as it sounds: a costume contest on the radio.  Les and the band seemed bored as John questioned audience members as to their favorite adaptation of Roald Dahl's book (Obviously, everyone preferred Gene Wilder.) and then asked about their costumes.  The winners were a couple dressed as Wonka and Veruca Salt, but with rubber fish masks for faces. (I voted for the older guy dressed as Augustus Gloop because the Wonka-fish seemed totally unaware of his resemblance to Captain Beefheart's Trout Mask Replica cover.)  Claypool pointed out that the winner for him was the child in the front row dressed as a box of Nerds.  I just wanted it to be over, so we could get back to the show.  Finally, Schaefer said the treat for us would be more Primus songs.  Claypool strapped on a bass that had glowing green guide dots along the top of the neck, which made it especially interesting when his hand would slide across it in the darkened room during "Fisticuffs."  They followed with the chant-inducing "Here Come the Bastards" from 1991's Sailing the Seas of Cheese.  But once it was finished, there went the bastards.  I guess the show is called Soundcheck because it's not a real show; just a little taste.  And while I enjoyed the performance I saw, it was way too short for the ticket price of $28.95.  They played six songs in just over 30 minutes, which means I paid $4.83 a song.  The runtime of the entire album is just over 40 minutes.  Why not play the whole thing and skip the stupid costume contest?  I'm glad I saw Primus.  I'm glad I saw them in such a small room.  But it's a crime to charge almost a dollar per minute for live music.  You can now stream the show on the Soundcheck page.  At least that's free.