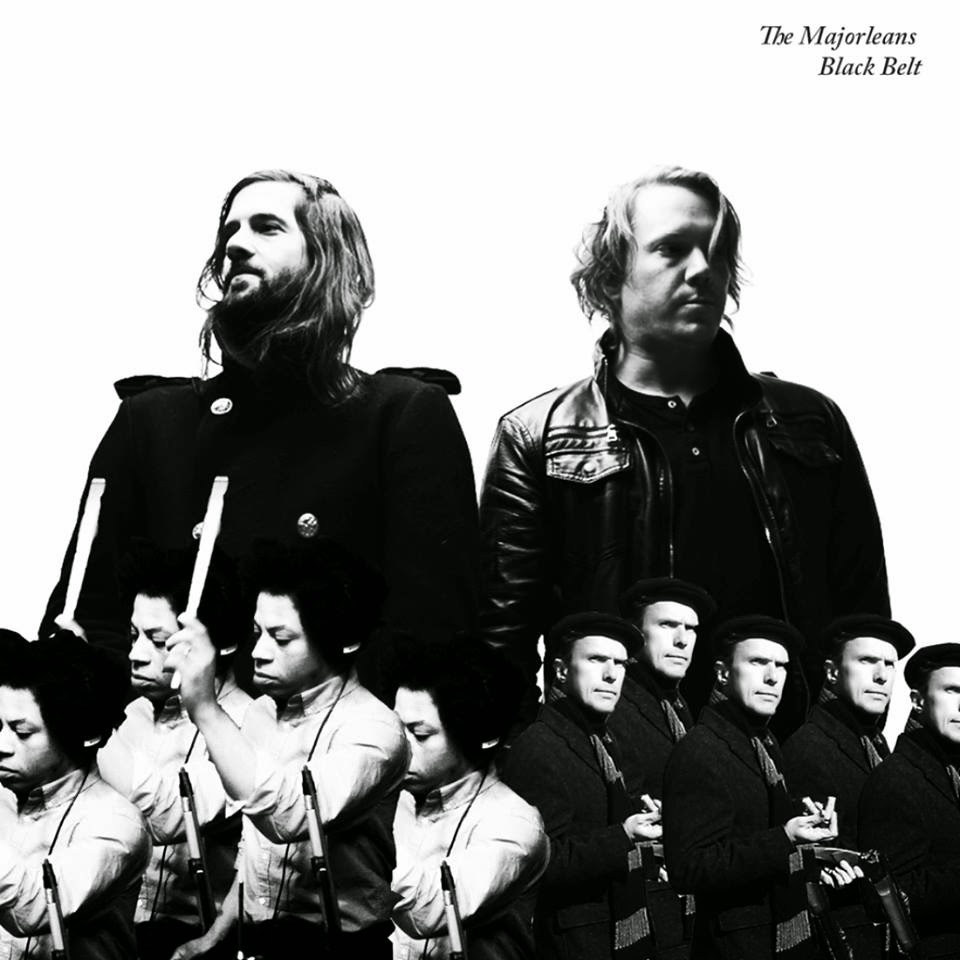 Any martial artist will tell you that a black belt takes time to earn.  So it makes sense that the Majorleans' new album Black Belt took years to make, from recording in a poisonous Chinese church basement to the lead singer's living room to a professional studio, where it was engineered by a Grammy-winner who has worked with everyone from Faith Hill to the Fugees.  The record finally dropped on Tuesday.  Last night, the band took to the Mercury Lounge to celebrate.

The show was opened by Boston's McAlister Drive, or four guys who don't look like they belong in the same band.  If you based them solely on appearance, the bearded, bespectacled guitarist could've been in Beck's backing band, the long-haired drummer from a stoner-rock group, the floppy-haired bassist in a dance-pop outfit, and frontman Christoph Krey fit the part of a bartender at Western-themed watering hole in Bushwick.  Their sound was nothing like the combination of these styles, however.  It was Americana-infused pop-rock.  They weren't bad, but they weren't original enough for me to really care.  That doesn't discount the fact that they are enjoyed by others, including a recently married couple who first met at a McAlister Drive show.  "Thank you for listening to the band all these years.  We write terrible music," said Krey, dedicating "Best Dressed" to the newlyweds.  "This is the part where y'all put your hands together, y'all raise your drinks, and y'all just sing along," instructed Christoph before the final number, "Got It Right."  And exactly how does one clap their hands and raise their drink at the same time without making a huge mess?

While the setlist hasn't changed much in the times I've seen the Majorleans, the addition of a third guitarist, David Andreana, brought a new dynamic to the show.  The triple-guitar attack on the intro to "Mr. Magic" boiled so ferociously that when they turned things down to a simmer for the verse, Nicky Francis' talkin' blues vocals seemed almost sinister.  I don't think I'm off-base by suggesting that the presence of Andreana freed up Francis to concentrate less on his playing and more on his singing.  Take the lyrics in "Never Had Enough," where Francis implores, "I'd like to see you both at the same time with me / I'd like to see you both some time."  While you could interpret this as the desires of his inner monologue, the way he sang it last night felt like he was actually propositioning two women at a party for a threesome.  With a smirk in his voice and drawing out the "both some time" of the second line, he wasn't reiterating; he was correcting a Freudian slip.  The ladies definitely heard him, but they probably smiled and went home with him anyway.  My favorite song from the album, "Real Bad," got the crowd dancing, not to mention the old guy next to me who jumped for joy as soon as he heard the first notes.  Riding the wave of Chris Buckle's feedback on the tail of "See the Seams," "Under Ma Wheels" proved a formidable closer, a fun country rocker that never eased off too much thanks to Colin Brooks' insistent kickdrum and cymbals.
(To learn more about the making of the album, check out the podcast below, recorded at Mission Sound during the Black Belt sessions.)


Although it was the Majorleans' release night, they shared the bill with their longtime friends, Frances Cone.  After eating a banana on the stairs beside the stage, Christina Cone took her spot at the keyboard in the center and began playing "Heartland" from the band's first album, Come Back.  Her bandmates joined her and they launched right into a new song, "Wait Right Here."  Though repetitive in its lyrics, the song eschewed boredom nicely by its variety of sounds: Alex Baron's simultaneous shaker-work during his drumming, bassist Andrew Doherty's vocal harmonies, and a few well-placed handclaps.  The result was a song that you're singing along with before it's over, a testament to the band's writing abilities. "Better Man" underwent another remake, as Cone stepped away from her keys, accompanied by Jeff Malinowski's slowly jangling guitar and Alex's mallet-drumming.  Their cover of the Black Keys' "These Days" was excellent, as always, and the hints of classical music in another fresh tune, "Not a Man," proved that the best is on its way from this young group.