I spent an extra night in Las Vegas just to see the John Butler Trio.  Butler revealed to the Brooklyn Bowl crowd that he was a little apprehensive about playing Vegas on a Friday night.  And who wouldn't be, having to compete with any number of Cirque du Soleil performances, exclusive nightclub parties, and comedy shows, not to mention legal gambling and prostitution.  But from the cheers greeting the first notes of "Cold Wind," it was obvious that this wasn't an audience who'd just stumbled in off the Strip; they were JBT fans through and through.  That didn't stop John from poking a little fun at the city's reputation, however, as he followed the question "Are you having a good time?" with "Are you here with your actual partner?"  When a resounding "Yes!" bellowed from the floor, Butler admitted that he was surprised to find the Fountains of Bellagio inspirational, and that he may have even teared up.  He proceeded with a pair from April Uprising, the jaunty "Gonna Be a Long Time" and a supremely-rocking "I'd Do Anything (Soldiers Lament)," before revisiting Flesh & Blood with "Bullet Girl." 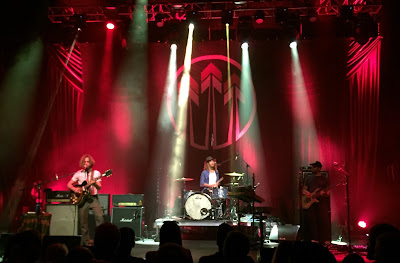 Butler made sure to recognize his longtime fans too, pulling out a banjo for "Better Than."  If that weren't enough, "Used to Get High" dropped right into "Pickapart," sending the crowd into a frenzy that only intensified as the song progressed into Primus-territory with a stanky staccato finale.  With the crowd so amped up, Butler had to make a decision on where to go.  The only option was a hard reset, having the audience applaud bassist/keyboardist Byron Luiters and Grant "G-Money" Gerathy as they exited the stage, with Butler taking a seat to play his ever-evolving instrumental "Ocean."  While the song began gently enough, it ebbed and flowed over the course of its 13 minutes, eventually culminating with Butler's furiously strummed climax.  The Vegas crowd roared louder than one of Siegfried & Roy's white tigers.  John thanked the room as his comrades returned, remarking, "It's extremely self-indulgent and I'm glad you're encouraging it."  Fortunately, it never felt egoistic because Butler and his bandmates are so skilled at their instruments.  They began half of their songs with extended intros not found on the records.  In the hands of lesser musicians, these would've seemed extraneous and dull, but with JBT, they were the highlights of the night.  The grin on G-Money's face anytime John would venture towards the kit in a moment of improvisation was all the evidence one needed to see that they were having a blast onstage, and that fun filtered directly into the crowd, who gleefully scatted along to set-closer "Zebra."

Introducing the encore, John announced, "This next song is... fun for us to play."  JBT plunged into "Livin' in the City," my favorite track off Flesh & Blood, with John punching himself in the jaw to the cadence of the "Sometimes I wonder just who I am" line in the second verse.  Checking his mic after the ditty, Butler made a sound like "chicka chicka." Without missing a beat, G-Money replied "oh oh" as if singing the "Oh Yeah" song from Ferris Bueller.  The band shared a quick chuckle, and then Butler made a motion to thank the crew because "without them we'd just be grunting, hairy men in darkness."  They wrapped up the evening with "Funky Tonight," where Butler repeated, "I guarantee you and me gonna get down funky tonight."  Few bands can make such a guarantee and deliver, but the John Butler Trio is one of those bands.  A band totally worth staying up all night at the airport for to wait for an early flight the next day.