I'd never seen Rockwood Stage 2 so crowded.  Yet I squeezed into the sweaty room, my back pressed against the metal railing at the entrance and my backpack containing my podcasting equipment (along with the fresh interview I'd just conducted with Rayland Baxter) wedged between my legs.  If it were a lesser artist, I would've foregone the claustrophobic conditions and hopped an F train home.  But this was Rayland Baxter, an amazing songwriter that I hadn't seen since he opened for Scott Tournet at Brooklyn Bowl in 2013.  And this time, he came armed with a slew of new tunes from his about-to-drop second LP, Imaginary Man, and a full band, including Cage the Elephant's Nick Bockrath on guitar. 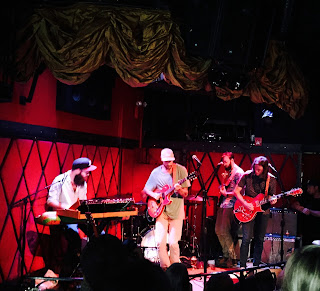 Rayland took the stage solo, informing the packed house, "Okay, I've gotta kill ten minutes."  He drifted gently into the beautiful love song "Olivia," one of my favorites from his first record.  His bandmates joined him by song two, "Bad Things," which was followed promptly by "Marjoria."  The old tunes out of the way, they took a stroll with "Mr. Rodriguez," opening up its finale to incorporate a Dead-inspired jam session.  "As many of you know, my wife is pregnant with our first child," Rayland remarked to supportive applause just prior to "Your Love."  Ever the joker, he clarified, "I'm just kidding. I don't have a wife."  While Baxter tuned his electric guitar for "Freakin Me Out," keyboardist Jimmy Rowland tapped out a few rounds of "Charge" until Rayland chimed in with a perfectly pitched strum.  They chased that with another type of freakout, "Temporary Queen of a Bad Time," a number reminiscent of early Santana, and based on a true story of Baxter meeting a woman in the early morning at a music festival.  The hippie chick had handed him an orange juice, which he gulped down for the vitamin C.  Unbeknownst to him, the O.J. was spiked with LSD, and the day took an unexpected turn.  They wrapped things up with the loudest rocker in the bunch, "Young Man."  I squirmed my way slowly through the masses and bought the t-shirt.