The Waco Brothers play in Chicago.  And SXSW.  And that's it.  So when I saw that they were coming to Union Hall, my curiosity was piqued.  When Chris Mills & the Distant Stars were confirmed as the opening act, my Wednesday night plans were decided.

The crowd applauded as the Mills and the Stars shuffled onto the stage.  "Don't get too excited," Chris said with a laugh before charging into "Atom Smashers," promptly winning over the Wacos' fans with the satiric, propulsive rocker.  Chris' banter was on-point as always, revealing that he'd just recently returned from Walt Disney World.  "Has anyone here been to Disney World last week?" he asked before proceeding to discuss the absence of a certain racist character from Splash Mountain.  "Anyway, it's a fun ride.  Fifty-foot drop," he added.  Though it wasn't terribly noticeable, Chris admitted that he's been having some issues with his vocal cords, and is currently in speech therapy.  The repetition of phrases such as "My mom makes us marmalade" and "Marv loves my mom" has Mills pondering a future as a copywriter for speech therapy exercises, but wishfully he'll stick to songwriting, so we can get more tunes like standouts "Blooms" and "Castaways." 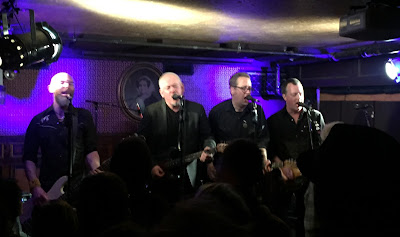 Just prior to 10:00, the Waco Brothers took their spots at the head of a room so packed that fans were standing on the pews along the right wall.  Jon Langford re-dubbed the band of socialist cowpunks the "Bernie Bros," dedicated to exposing the "Clinton myth."  They started by taking on Bill with "See Willy Fly By."  Langford later threatened the audience to vote for Bernie Sanders or else the Wacos would have to beat them up and set their houses on fire.  "You say you want a revolution," he punctuated with a cackle.  Their music is just as subtle as their politics, and coincidentally, the reason why the concert was so captivating.  You couldn't help but be taken by the front line-attack of bassist Al Doughty, guitarist Langford, guitarist Deano Schlabowske, mandolinist Tracey Dear, and violinist Jean Cook crammed shoulder-to-shoulder to sing at the narrow stage's edge as they stabbed at the air with their instruments.  While the five folks up front might be the face of the band, they'd be nothing without the excellent drumming of Joe Camarillo, seated beneath that old lady portrait, which Langford jested was Camarillo's grandmother and had been painted in prison "with the ink of beetles he caught in his cell."  The jokes continued as Jon passed out the Chris Mills setlists that remained on the stage to crowdmembers in the front.  "I'd like to give you this.  And you this," he offered.  The Wacos' own setlist pulled heavily from their latest record, Going Down in History, with cuts like "Had Enough," "All or Nothing," and the title track fitting snugly alongside older anthems like "Hell's Roof" and "Plenty Tough - Union Made."  Partway through the encore, Mekons' drummer Steve Goulding replaced Camarillo as the anchor, Langford teasing the Who's "Pinball Wizard" until they plunged into "Folsom Prison Blues."  Each Brother (including Cook) took a turn soloing on the Cash number, with Doughty's deep-end effort causing to Langford to remark, "I'm gonna void my bowels," before they wrapped everything with T. Rex's "20th Century Boy."


With the invention of Google's autonomous car, we may actually get to see the Waco Brothers on the east coast more often.  Langford noted it would be their preferred method of transport, as they could just get drunk and lay on the floor.  "That's the only reason why you'd make a car with no driver.  Why the fuck else would you do that?" he questioned.  Let's hope Google speeds things up, so we can all get wasted and see the Waco Brothers without having to trek to the middle of the country.

Check out my podcast interviews with Jon Langford and Chris Mills.  They're two of my favorites.

SET -
See Willy Fly By / Red Brick Wall / Had Enough / Receiver / Going Down in History / Harm's Way / Pigsville > Devil's Day / Too Sweet to Die / Walking on Hell's Roof Looking at the Flowers / All or Nothing / Plenty Tough - Union Made / Fox River / Building Our Own Prison / I Fought the Law / Revolution Blues / Do You Think About Me?