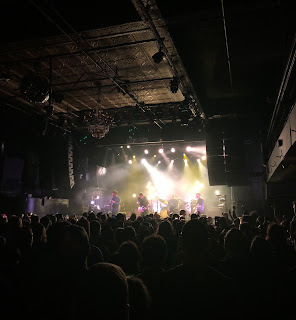 The first song I ever heard by Minus the Bear was "Knights" in 2007, but I never saw them in concert. When I got the opportunity to catch their stop at Irving Plaza on the 10th anniversary tour for Planet of Ice, I was ecstatic. Outside of building a time machine and  then using it for such a trivial reason, it was the closest I would get to seeing a show by the band when I'd first gotten into them.

To be honest, I had no idea what they'd even look like, as their album artwork doesn't feature the members, so it was a little surprising to learn that frontman Jake Snider has a graying Mark Hamill beard. But it's not about looks with MTB; it's about the music, as evident in their sparse stage setup of a few standing light rigs in front of a backdrop of the cloudy snowscape of Planet of Ice's cover. The band wasted no time in revisiting the record, revving up the opening cut "Burying Luck" to start the show. "You guys are fucking incredible. Thank you," said Snider, who couldn't seem to address the crowd without using the f-word. And that fucking crowd was full of diehards, singing to the rafters on "Ice Monster" and even along with the guitar part on "Knights." While it was annoying to have my favorite POI song blemished by the guy behind me doing just that, you almost couldn't blame him, as guitarist Dave Knudson posted himself at the front of the stage to rock out. As they progressed through the album's tracklisting, the entire band played with such confidence and passion that it was apparent they weren't going to phone these numbers in, even if they were a decade-old. I will admit that my ear can get a little fatigued listening to math rock, so Alex Rose's saxophone on "Part 2" and the extended noise jam in "Lotus" were welcome diversions. They followed the Planet of Ice portion by hopping around their discography, going as far back as 2002's Highly Refined Pirates and as recent as last year's Voids. The Coathangers, who had opened the show, introduced some red balloons (not 99, like 8) into the audience to toss around during a righteous "Secret Country." This kicked off a trio of the only tracks the band would play from 2010's Omni, culminating in the smooth synth lines of "Dayglow Vista Rd." to finish out the set.


It was Alex's birthday, so for the encore, his bandmates presented "the old man" with a cane as a gift. "It was gonna be cake!" spoke Jake. As a cake materialized from backstage, he added, "And it is. There's cake. Eat up, motherfucker." After a round of "Happy Birthday to You" from everyone in the venue, Rose rested his birthday treat precariously on the top of his keyboard while he played on "Invisible," the standout track from Voids. They wrapped things up with an emo-flavored pair of tunes that have by now become MTB standards, "Absinthe Party at the Fly Honey Warehouse" and "Pachuca Sunrise." I'm glad I finally got to see them, and it's likely I'll be in the fucking crowd for the Omni anniversary in a few years.

ENCORE -
Happy Birthday to You / Invisible / Absinthe Party at the Fly Honey Warehouse / Pachuca Sunrise
at 4:33 AM