"We're officially classic rock," joked Jimi Haha, the eccentric frontman of Jimmie's Chicken Shack, who celebrated their 25th anniversary last night at Rams Head Live in Baltimore. While their 20th anniversary show had purposefully highlighted the band's different eras, the silver anniversary was a decidedly looser affair, with no setlist to guide them through an evening of jams and personnel changes.

Former-WHFS disc jockey Rob Timm had the honor of introducing them, encouraging the audience to "Please welcome the fowlest band in the land, Jimmie's Chicken Shack!" As the crowd cheered with acclamation, the guys (Haha on vocals/guitar, Christian Valiente on bass, Jerome Maffeo on drums, and Dave "Double D" Dowling filling in for the band's current lead guitarist Island Styles) got things rolling with a pair of classics, "Sitting with the Dog" and "Blood." "Dropping Anchor" was dedicated to a fan/friend who'd flown in from San Diego to have his bachelor party at the show. "Give it up for him. He's dropping anchor and getting married," Haha said, offering him the first shot from a bottle of Patrón that would be empty by the night's end. 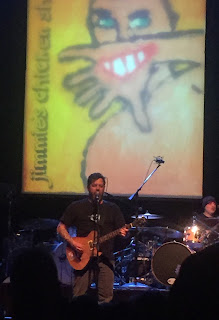 "Lazy Boy Dash" marked the first selection from Bring Your Own Stereo, and although Haha flubbed some of the lyrics, he got a chance to redeem himself on his favorite track from that album, "Fill in the Blank." Jimi called up guitarist Matt Jones from the back of the venue to join them on a rowdy "School Bus" detour back to their first album, before they swerved back into BYOS territory with "Pure." That song's backing vocals were impeccable, but Haha messed up his guitar part on the mellow "30 Days" that followed. No longer in possession of the Afro-puffed "wig of shame" used to humiliate members after they fuck up, Haha volunteered to wear a set of pink, light-up cat ears that Double D dubbed "the ears of fear" during "Let's Get Flat." Casey Hean accompanied them on the number. Hean was not present at the 20th anniversary, so it was my first time seeing the wild guitarist. While most members have always been willing to let Haha take the spotlight, Casey's ebullience created an interesting dynamic onstage, as he competed for attention. Jimi eventually gave up on the tune, claiming, "No one wants to hear any more of this fucking song. This song is stupid," before wrapping it up with a noisy "big rock ending." During "Outhouse," the crowd tossed a big-titted blow-up doll around like a beach ball. She ultimately made her way to the stage, where Haha demonstrated on her inflatable breasts how assholes in the '90s would grope crowdsurfing girls, and maintained that he would stop songs when he saw this happening. Keep in mind, this was decades before the Architects and Drake went viral for doing the same thing last year.

Mike Sipple, whose ":" jersey still fit, took a seat at the drums for "Spiraling," which also featured an all-too-brief sit-in from original bassist Ché Lemon, who was then traded out for Derrick Dorsey on rarity "Slow Change." While it may be Haha's favorite JCS tune, it had only been available on a mail-in EP, so its scarcity resulted in fewer crowdmembers singing along and a consequential drop in the room's energy level. Fortunately, a raging "When You Die You're Dead" brought everybody back onto the same page. My personal favorite, "Another Day" came next, with a surprise drop-in from Kelly Bell on congas. I didn't take note of the time, as I never expected them to jam on it so long, but several solos took it well over the ten-minute mark, culminating in a swirling, almost psychedelic groove. For a cool-down, Matt Jones returned for "Beautiful," the only number performed from Re.Present and the only song of the evening that Double D did not play on.

As the lineup switched yet again, Jimi remarked, "We've got three songs left. We're supposed to be done at 1, but fuck that. 'Cause George Clinton fucking went past 1." (P-Funk had played Rams Head the previous night.) The first of the three was their 1999 charting single, "Do Right." Jimi went the reggae route towards the song's end, delving into Sublime's "Smoke Two Joints" and teasing "No Woman, No Cry." "I've never played a solo in that song since I wrote it," he revealed with a smirk after plucking out a slinky improvised passage. Then they loaded the stage with all three lead guitarists, both drummers, Ché, and Kelly Bell. "We're like the fucking Allman Brothers," chuckled Haha before giving props to John Mayer for his guitarwork in Dead & Company. He then proclaimed All Mighty Senators to be the best Maryland band, spouting off a few lyrics from "No Clothes On" prior to "Milk." Every guitarist took a solo, with Haha holding up a wooden Maryland flag with the word "Boo" emblazoned across the Calvert sections during Double D's. Before his own solo, Jimi boasted that we were about to witness the "best guitar licks you've ever seen," and lapped his tongue up and down the fretboard of his six-string. "Eric Clapton will never do that," confirmed the drunk guy next to me.

As the show wound down, things got emotional, with Double D disclosing that Kelly Bell had saved his life a few years back, and a misty-eyed Haha referencing the lyrics to "Stop." "We had a song where I said, 'I feel lucky I made it to 25.' Now the band is 25." He also made sure to clarify that we weren't supposed to be booing Dave's solo, but that the sign was in tribute to Ramon "Boo" Valdez, Rams Head's talent buyer that passed away in 2016. Of course, no JCS show would be complete without their raucous first single, "High," so they made it their closer. "I don't want to end this show or concert or whatever the fuck it was with applause. I want to end it with a 'Boo,' requested Jimi. As he held up the the flag artwork again, the crowd booed their approval, grateful to have had this band in their lives for 25 years, not to mention twenty minutes after curfew.